At the start of World War II, the United States military had no canine corps so it fell to civilians, primarily led by poodle breeder Alene Erlanger, to organize a drive for people to donate their pets for the war cause.

As Erlanger saw it, fathers, sons, uncles, and brothers were all enlisting… Was it so far-fetched to think that people might donate their dogs to fight for the nation?

Not at all. The patriotic spirit spoke to many, and donate they did. One of the pets donated was an 18-month-old German shepherd, named Lucky, owned by the Walton family who lived in Tamaqua, Pennsylvania.  (Erlanger also donated many of her poodles; for her story, read “Poodles Against Hitler.”)

As the possibility of the U.S. entering the war came closer, Donald Walton enlisted as did many men of his generation. He was notified that he had had passed his physical for the Navy and that it would be only a few days until he would be called up.  He and his wife had a young son and they needed to scramble to make arrangements for 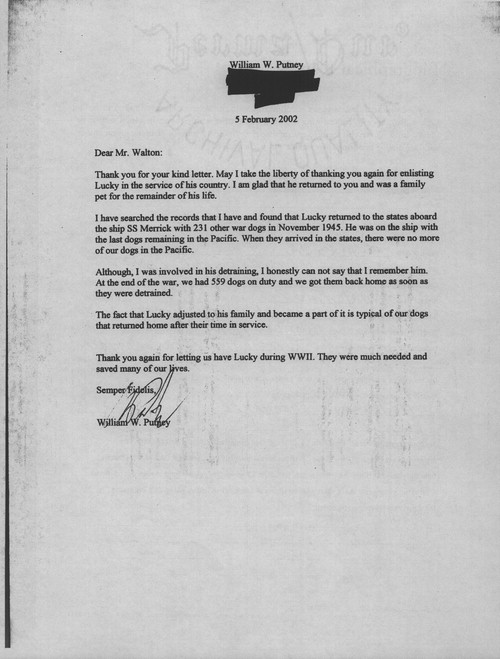 where she and the baby would live while Donald was serving. The best option seemed to be for them to move in with her parents in Washington, D.C., but the D.C. house did not have the yard or space for a dog.

Walton knew the Marines were looking for dogs, and so he made arrangements for Lucky to enlist. Walton registered Lucky, and Lucky was boarded onto a train in a crate that bore the label: “USMC Devil Dog.” This was the term for Marine war dogs at the start of World War II.  Lucky was to report to Camp Lejeune in Jacksonville, North Carolina where these dogs were being trained.

In this way, Lucky became a war dog, a Marine.

At Camp Lejeune, the dog training was overseen by Dr. William Putney, a veterinarian who had seen all the errors made with dogs in World War I. He insisted on reward training, no negative punishments, and he not only oversaw all the intake training of the dogs, but after the war, he created a program to de-train the dogs so that they could return to family life.

When Lucky passed his basic training, he was promoted to Private First Class, and the Marines notified the family that he was being transported to the Pacific Theater as a replacement for a casualty. While the family was delighted he had passed basic training, “we didn’t exactly like the idea of him replacing a casualty.”

Lucky’s job turned out to be searching out Japanese soldiers who were hiding in caves on Guam.  Next he was sent further west where dogs were needed in the amphibious invasions of the islands of the Pacific.

Regular reports were given by the Marine Corps, explained Don Walton in an interview conducted with him as part of the Veterans History Project run by the Library of Congress.  The family was also told they could write to Lucky via his handler. They were given his serial number (651) and an Army Post Office number in San Francisco with the promise that the letters would be delivered to Lucky’s handler.

The family never wrote, however. Walton explains: “We were still having to move around a lot and everything was uncertain. We thought since we had actually given away the dog that perhaps it wasn’t a good idea to keep up correspondence.”

Lucky was the type of dog that became well-regarded by the entire Marine unit he traveled with.  After a few expeditions out with him, the other men learned his value. He and the handler never had to dig their own foxholes as the other men would dig it for them. They wanted Lucky close at hand.

The dogs could not bark or growl when they and the men were in hiding, or it would reveal their location. In a letter to the family, Lucky’s handler explained how he took to sleeping with Lucky by his side; the palm of his hand under Lucky’s throat. If Lucky’s throat vibrated with a silent growl, it was enough to waken the handler who then awakened the other Marines.

After the war ended, Lucky continued to serve. He was part of the occupation forces in Japan, and they needed handlers and dog teams to patrol and help with the transition as Japan worked to re-form a civilian government.

When Lucky and his handler were close to discharge, the handler sent a long, impassioned letter, requesting that the family let him keep Lucky. (In the hierarchy established by the Marines, the family’s right to the dog came first; second in line was the handler.)  The handler referred to him as “a sweet dog you could do anything with.”

The Waltons said “no;” they wanted Lucky to come home. In the VHP interview, Walton said writing back to the handler was the most difficult letter he ever had to write.  He explained that just as all the young men were returning to their families, Lucky needed to return to his family too.

The war dogs that had been trained to be on hyper-alert round-the-clock and to attack as needed had to be re-oriented to civilian life.  Dr. Putney had developed a careful system for detraining. The process involved supervising the dogs re-entry into civilian life and letting the dogs socialize (under close supervision) with all types and ages of people.

When the dogs were sent home, there were specific instructions for all families.  The dogs needed a specified amount of play or exercise time so they had an outlet for their energy, and the families learned what command words they were never to say in front of the dogs so that the dogs would never think they were to attack.

After midnight one evening in April 1946, Lucky arrived on a train coming into Richmond, Virginia. Donald Walton was at the station waiting for him as crates were unloaded from the train. Walton said that though these dogs had gone through the war years being taught not to make a sound, “As soon as Lucky heard my voice, he couldn’t resist a little whimper.”  When Walton opened the crate, Lucky went over to a bush to take care of business, and then he came back and put both paws on Walton’s shoulders wagging his tail violently.  “He recognized me.”

Lucky had never been to the home where the Walton family had moved after Donald was discharged.  Walton said that Lucky entered the house and carefully went through every inch of it, making sure there were no threats for himself or the family. “Then he came back and laid down at my feet.”

Taking Care of the Waltons

Because Lucky was used to taking care of his Marines, it was only natural that he would become protector of the Waltons’ two young sons. One day one of the boys had packed up a few provisions and put things in his wagon. He was planning an adventure. If the child was going somewhere, Lucky was going with him.

A neighbor looked out and saw the pair on their jaunt, and decided the boy was a bit young for a big adventure.  She called out to them, offering a couple of cookies. That was enough to slow progress of the journey that day.  Lucky and the little boy came up to visit with the neighbor and eat some cookies.

No matter where the children were—playing in the yard, biking down the street, or swimming at the beach—Lucky was there making sure that no harm came their way. He wasn’t going to let anything happen to his little Marines.

There are more stories of this type documented in the Veterans History Project.

The information in this article is from an interview with Donald R. Walton, Lucky’s owner, on July 19, 2002. It is part of the Veterans History Project.

“Faithful and True Even to Death,” by Megan Harris, April 15, 2015, Folklife Today, Library of Congress.

Because there are no photos of Lucky on file, I have used photographs of German shepherds from www.istock.com