During World War I, the United States had no canine corps, but once we entered the war, our troops were the beneficiaries of military dogs trained by other countries. 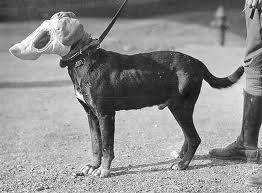 Carrying messages was one of the important uses of dogs during this time. Telegraph and telephone lines were often cut by the enemy, and dogs were faster and were smaller targets than humans. However, it was no easy task. Not only did they have to run long distances, but the dogs had to overcome obstacles like getting through barbed wire and crossing rivers. Those that were trained for liaison work were expected to travel to a destination and then return with a reply.

To carry the message, the dog’s collar was fitted with a metal tube; and their unit affiliation was indicated by the color of ribbon attached to their collars.

In a second-hand shop I found a book by Albert Payson Terhune (1872-1942), an American journalist and collie breeder, and Terhune included in his collection of stories a heart-stopping one about a messenger dog, a mongrel, that I want to share today in honor of National Mutts Day.

The Messenger Dog That Saved Verdun

The Siege of Verdun lasted for almost 10 months, and the death toll on both sides was heavy. Verdun was strategically vital to France, so it was important for the French military stationed elsewhere to know how the battle was going. During 1916—the year of the battle, seventeen French soldiers had been killed carrying messages. 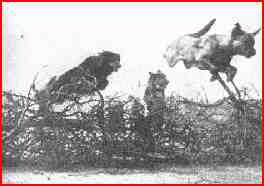 By autumn of 1916, the German army had surrounded the city. Taking possession of a ridge above the town put them in position to prepare for a final attack.

At French headquarters, commanders were aware that the situation had taken a turn for the worse, and they wanted to get word to the soldiers and townspeople of Verdun that more military units were being sent. They also were hoping that somehow a message about the current situation might be sent back so that they could plan for what awaited them.

A messenger dog named Satan was selected for the task. His handler was in Verdun so if any man or dog could get a message through, the commanders felt Satan could do it.

For Satan, the first mile and a half or so involved terrain where there were bushes and other forms of cover, so he ran and crouched and ran and crouched, watching his surroundings carefully. The last stretch for Satan, however, involved crossing open fields, making that part of the journey very dangerous.

French soldiers on watch in Verdun happened to note that something seemed to be coming in their direction. With the gas mask and something bulky attached to his back, Satan rather looked like a large-headed monster with wings. The watch command in Verdun alerted the commandant, and as the military leader looked through his field glasses, the vision he was seeing was becoming clearer—a dog in a canine gas mask, flying at record speed.

Satan was running rapidly, but he was also weaving in a zigzag pattern (as he had been taught) to make himself a more difficult target for a marksman.

Despite this maneuver, Satan was hit and wounded by a German sharpshooter. He dropped to the ground, but moments later, he staggered to his feet, paused to re-orient himself and continued om With his slower pace, Satan took another bullet in the leg but he was close enough he could hear the men calling to him, and he kept going—hobbling as fast as he could on three legs.

As he neared the French line, soldiers stepped out to pick him up and bring him to safety and to retrieve the message he carried for the commandant.

The soldiers then saw that what had looked like Satan’s wings were two baskets containing carrier pigeons—they would have a way to send a return message!

Taking pen and paper, the commandant wrote the details of the situation, specifying the exact locations of the German troops. He wrote the same information twice; one note was rolled and placed into the quill carried by one pigeon; the other note was placed in the quill of the other pigeon.

Only a short time had passed, and both pigeons were ready to be released to attempt to take the message back to headquarters.

The Germans, however, were expecting this. One bird was brought down almost immediately; the other seemed to fly away.

One hour later, the French at Verdun got their answer. The pigeon had made it back to headquarters. Long-range guns of the French military took perfect aim at the German battery encamped on the ridge above the town. Soon additional military reinforcements arrived.

As for Satan, he recovered from his injuries and retired, a French hero.

For the story of how one woman built the K-9 Corps in World War II, see “Poodles Against Hitler.”

1 thought on “World War I and a Remarkable Messenger Dog”