Memorial Day, initially known as Decoration Day, began shortly after the Civil War in the way that one might expect a day of remembrance to begin — mourners started placing flags or flowers on the grave sites of those from their communities who died in the war.

In 1868, General John Logan, commander in chief of the Grand Army of the Republic, an organization of Northern Civil War veterans, proclaimed that May 30 each year should be known as Decoration Day.

The South was not comfortable accepting Logan’s proclamation of a date, and they set their own timetable for honoring their departed loved ones; some states picked June 3, which the birth date of Jefferson Davis, who had served as president of the Confederacy.

As World War I veterans returned, Memorial Day (as it had been renamed in 1882) grew to be a day to remember all of our military, no matter what war they served in. While there have been other changes in the holiday over time (including the fact that the holiday is now celebrated on the last Monday of May regardless of the date), the successful raid on Osama Bin Laden also brought a detail to public attention of something else that has changed.

Today military honor — in survival and in death — now includes canine members of the military.

Several years ago at Fort Campbell, Kentucky, President Barack Obama and Vice President Joe Biden met with the units that carried out the raid on Osama Bin Laden’s compound in Pakistan, it was noted by the press that Cairo, the military dog who participated in the raid, was also present.

Dogs have not always come home and been so honored.

Dogs in the Military 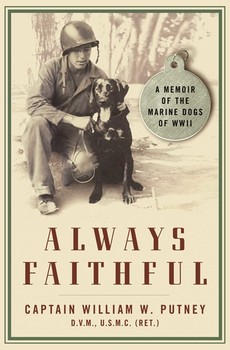 While dogs have almost certainly followed along with military units knowing they might find men who would pet them and slip them a bite to eat now and then, there was no official program to train and use dogs in the military until World War II.

William W. Putney, a Marine Corps officer, who had just earned a degree in veterinary science when he went into officers’ training school at Quantico, Virginia, was instrumental to beginning such a program for the marines. Putney was asked to organize a newly established war dog training program that was to be based at what is now Camp Lejeune, North Carolina.

Putney and Training the Dogs

Today’s dogs are raised to be in the military, but when Putney began the program, dogs were pets recruited from families. The dogs then had to be conditioned not to react to gunfire and other loud noises; they needed to learn to signal danger to their handlers via body stance or ear movement, not barking. They were also trained to sniff out land mines and trip wires and carry messages.

After the invasion of Guam, Putney and a unit of men with their dogs were sent to the South Pacific where the use of the animals was credited with saving many lives, including Putney’s.

Captain Putney was leading a patrol of men with three of the dogs to flush out Japanese soldiers hiding in caves on one of the surrounding islands. A Doberman named Cappy was out in front of the unit when a shot rang out; Cappy was killed, but the men were alerted to the danger. Had Cappy not been in the lead, Putney would have been ahead of his men, and he likely would have been shot instead. 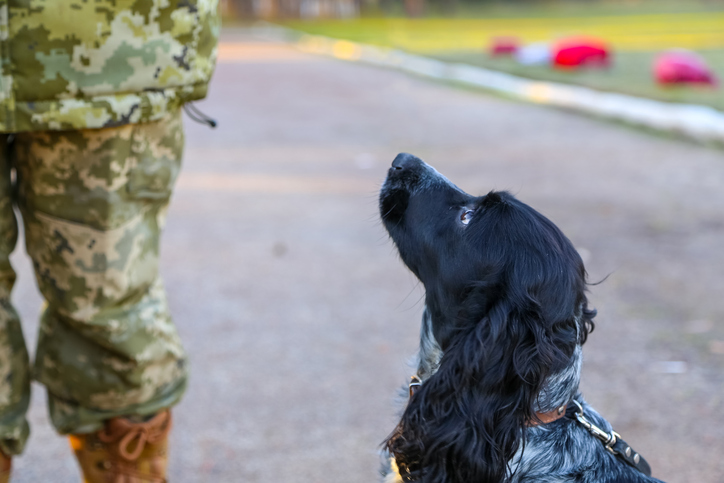 As the war ended and the men and dogs started being sent home, Putney came home to learn that as the dogs came back, the plan was to euthanize them; those in the States assumed that dogs who had been trained to fight and protect could not be returned to lives with families. Putney felt otherwise, and Putney convinced the officers at Camp LeJeune, to permit him to start a program to desensitize the dogs — a multi-step process.

The dogs had been trained to answer to a single person, so they had to become accustomed to several handlers (male and female). They had to acclimate to normal street sounds and movement, and many other aspects of daily life. An ultimate test was whether a dog could be taken for a walk in the community; would the dog be all right if someone walked past quickly, or if a person approached to pet him or her? Each of these milestones had to be reached very gradually.

Of the 559 dogs who were in the Marine Corps at the end of World War II, 540 were discharged to civilian life. Of the 19 who had had to euthanized, 15 were because of health reasons. Only four could not adapt to civilian life.

In his book, Always Faithful, Putney noted that because the canine corps was not maintained in the years immediately following World War II, some of the lessons they had learned about working with the animals had to be re-learned by those working with the next generation of animals. Unfortunately, one of the lessons — that the dogs could be desensitized — was never passed on, and from 1949-2000, euthanasia for former military animals was the law of the land.

Though Captain Putney returned to civilian life and had become a veterinarian in Los Angeles, he continued to advocate for change to the system, and three years before he died — sixty years since he had trained the dogs in the first canine unit, the Senate pass as house bill that permits handlers to detrain and adopt their dogs when their military usefulness has ended (October 24, 2000).

Today all branches of our Armed Forces use trained military dogs to patrol air bases, military compounds, ammunition depots and military checkpoints. There are approximately 600-700 of these canines in the Middle East in such places as Kuwait, Afghanistan, Saudi Arabia and Iraq. They continue to guard and protect our military personnel as they were trained to do, with courage, loyalty and honor.

While our hearts go out to the families of the men and women of the military who have lost their lives in service to our country, we should also include gratitude for the men and women who have trained the canine team members — and the dogs themselves — whose efforts have helped reduce the toll on human life in the many conflicts where these animals have served.

More stories of heroic dogs will be featured at America Comes Alive! during July and August. Daily profiles of dog heroes, “first family” dogs, and dogs who have starred in movies and television shows will be posted. Check the site regularly, or write me put you on the e-mail list: Write “dogs” in the subject line and send to [email protected]

Always Faithful: A Memoir of the Marine Dogs of World War II by Captain William W. Putney, The Free Press, 2001.

5 thoughts on “Memorial Day: Remembering All Who Have Served, Including Military Dogs”