Whistle, a Labrador/Golden Retriever mix, is owned by Marcie Davis, who in 2009 was the person who succeeded in getting the first full week in August officially dedicated as International Assistance Dog Week.  Davis is the Chief Executive Officer of Davis Innovations, a public health and human service consulting firm based in Santa Fe, New Mexico.

“Whistle is my third service dog,” says Davis, who is a paraplegic, paralyzed from from the waist down since she was six years old.  “I got my first dog in 1993 and I know what a life-changing difference it made for me.

I am so grateful for all the hours of devotion on the part of puppy raisers and trainers and schools—and all those who donate to the cause—that I  just wanted a way to honor the incredible efforts that go into providing these dogs to people with all types of disabilities.  It’s life-changing.”

Davis—and Whistle—also devote time to advocating for those who cannot advocate for themselves. They partner on a radio show, “Working Like Dogs” on www.petliferadio.com, and Davis also writes and speaks on topics related to service dogs, disabilities, and independence.

First Thought of Getting a Service Dog

In the early 1990s, Davis and her husband were watching a television documentary on the training of service dogs.   “When I saw the possibilities, I became very excited about getting a dog, and my husband agreed it was something I should explore.”

Davis, who has a master’s degree in library science, was working in the office of the Florida state attorney general’s office in Tallahassee, Florida.  She knew that to make a service dog a part of her life, she needed to talk to her employer.  If her application for a dog was accepted, she would need two weeks off to attend training, and then everyone in the office needed to be aware that she would be bringing a dog to work with her.

Her office was supportive, her application was accepted, and in 1993 Davis came home with her first service dog, Ramona, trained by Canine Companions for Independence.

“Ramona gave me so much more freedom.  I was able to go to more places locally—and drive there myself—because I knew once I arrived anywhere I had Ramona to help me.

“When you are in a wheelchair, dropping things is a real fear,” Davis continues.  “I have had more than one occasion when my dog has had to squeeze under the car to retrieve my keys.”

As a result of her increased independence at work, she was soon promoted. She could travel to meetings or go out to supervise other offices independently, and this made a difference in the level of responsibility that could be given to her.

As trainers have learned more about what people need and what the dogs can do, the number of ways her dog can help her has grown exponentially, Davis explains.

She and Whistle are together 24 hours a day, and Whistle, who was trained by Paws for a Cause, knows over one hundred commands, including opening doors and picking up objects as small 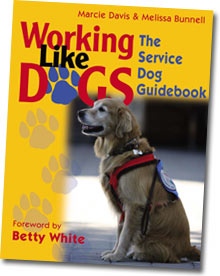 as a dime.  In addition, he is continually updating his skills and learning more.

“I don’t need another person with me when I want to get in or out of my wheelchair,” says Davis. “I have Whistle to help me.”

Whistle has been trained to a command called “brace.”  When he is told “brace,” Whistle becomes totally rigid so that Davis can hold on to him and shift her position.

In addition to getting her into bed (one of the times when the brace command is used), Whistle is also trained to help her roll over, and one of his final acts for her each night is to cover her up with the bed sheet and blanket.

Davis says she is often asked by other people whether they should get a service dog. “I always tell them they need to really think about it.  It’s a tremendous help but it is a total commitment.

“Whistle must be aware of my needs at all times, but I need to be aware of his needs as well.  If I have been working all day, I need to be sure I have given him some play time and some down time or he can become stressed.”

To cement the loyalty bond, service dogs are trained to answer to only one master, so Davis must be the one who takes care of all of Whistle’s needs.  She is the only person permitted to feed him, and if her husband wants to give Whistle a treat, then Davis must give the command for “treat” to her husband in front of Whistle, and then Whistle can enjoy a treat from another hand.

Davis has documented what she has learned about building this relationship in a book, Working Like Dogs: The Service Dog Guidebook.

Whistle is now 8 and a half years old, and Davis says that within the year he will need to retire.  “There are days when he just looks at me and you can tell he is saying, ‘Do we really need to be there at 8 a.m.?’  It’s up to me to let him retire as there will be a time when he is not strong enough to  do all that I need him to do.”

Davis keeps her retired service dogs, but to read about the heartbreak of making the necessary transition from one dog to another, please visit her website, Working Like Dogs.  “Challenges with Service Dog Retirement.”

As for Whistle, he is still by Davis’ side, all day every day, and when he’s not assisting Davis or working on the radio show, his bio states that he enjoys traveling, gourmet dining, and running and digging in his backyard.

This week there will be more stories of service dogs but you may also read about several service dogs that have already been featured:  “The First Seeing Eye Dog is Used in America in 1929.”