Fatty Arbuckle’s dog, Luke, was one of the most talented stars of 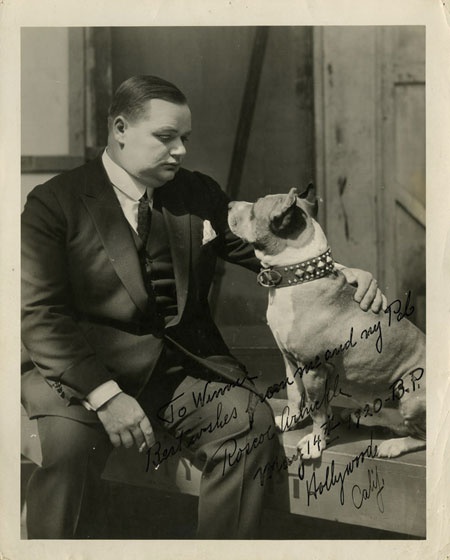 silent films.  In a day when camera tricks were technologically not possible, Luke is seen jumping from one wall on a building rooftop to another narrow wall across the way. He climbs from ground to roof via ladders, leaps into windows, and in one scene, Luke takes such tight hold of a villain’s pants with his teeth that the fellow is able to spin around quickly numerous times, never shaking Luke’s hold.

Luke is a delightful athlete and comedian in a time when film comedies were in their infancy.  Other genres of early films had their canine stars: Jean excelled in romances; Strongheart was fearless and always brought down the bad guy in adventure films, but when it came to comedy, there was no dog better than Luke, the English pitbull.

How Luke Came to Belong to Fatty Arbuckle 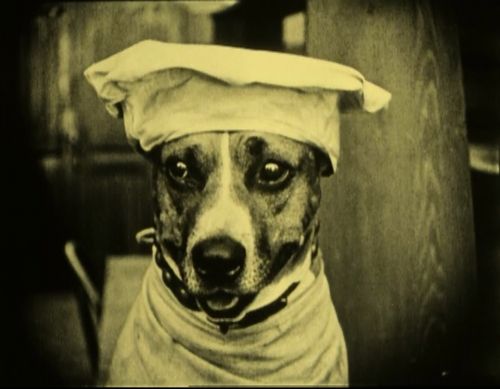 Luke came into Fatty Arbuckle’s life via marriage.  Arbuckle was married to Minta Durfree, another silent film star. Both were under contract to Mack Sennett.

In 1914 Minta was filming Lane, Speed, and Thrills, which was being directed by Wilfred Lucas.  They were shooting near Santa Monica, and there was an upcoming shot that involved the heroine hanging over a cliff’s edge, holding on only to a tree root.  Three hundred feet below was the pounding surf; she was doomed if she fell in. In convincing Minta to do the scene, Lucas promised her a “nice bonus” if she would hang  from a tree root secured by piano wire, and let the hero come in to rescue her.

Motivated by the thought of additional pay, Minta agreed to do the scene, and after the scene was reviewed, Lucas was thrilled with her work. At day’s end, he told her to stop by his house to pick up her bonus.

She and Arbuckle went to Lucas’ home to pick up her earnings, only 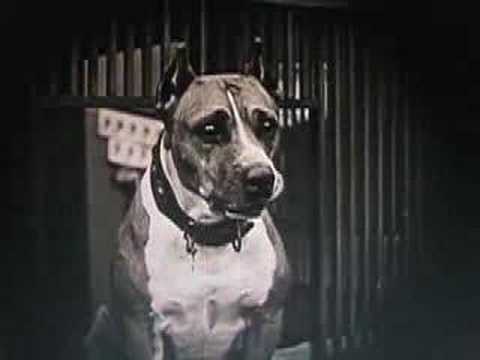 to have the director present her with one of the six-week old pups from his most recent and carefully bred littler of English pit bulldogs.

Minta and Fatty were taken aback at first, having anticipated a check. The puppy quickly won them over, and Minta named the dog Luke in honor of the director Wilfred Lucas.

So Minta’s puppy soon became Roscoe’s dog. (Durfree and Arbuckle divorced later on.) Roscoe loved working with and training the dog, and by 1915 Luke was ready for his film debut with Roscoe and Mabel Normand in “Mabel and Fatty’s Wash Day.” In this film, Luke is not yet the actor he would grow to be. He is primarily used as a prop, sitting patiently waiting for Mabel to hang her laundry on the clothes line. Now and then, Luke takes a glance off screen, clearly checking with Arbuckle as to what he should do.  Click here to see the short, one-reel comedy.

Luke Learned On the Job 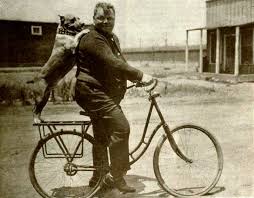 Luke went on to a rewarding career, eventually earning a contract that paid him $150 per week. He wowed audiences with daring feats and impressive acting, and he—and other animal stars of the day—were regularly featured in fan magazines.

The fellow behind a website, reeldogs.com, has done a masterful job of putting together a delightful highlights reel of Luke’s antics. Set to the song, “Best Friend,” there are many delightful scenes of Luke and his best friend, Fatty Arbuckle. (Arbuckle’s love for the dog is very clear.)  But there are some good action shots, too.  There’s Luke jumping great heights, scaling ladders, chasing villains, digging under a fence to rescue a woman in distress, and many other amazing actions. (The clip does reveal on camera “trick” that was possible early on; in a scene with Arbuckle on a bicycle and Luke running beside him, the action is clearly sped up.)  But take a look, too, at the scene where Roscoe is buffing the dog’s nails…. Luke’s whole body position is priceless, showing a clear ability for acting (runtime: 3 minutes):

Luke eventually needed other costars. In 1921 Roscoe Arbuckle was arrested and charged with the rape and murder of aspiring actress Virginia Rappe.  The incident was said to have happened at a hotel in San Francisco over the course of three-day party. Arbuckle was at the peak of his career as a director and as an actor, and this spelled nothing but bad news.  Though Arbuckle had an alibi and Rappe was known for doing what she could to profit from connections to film stars, the lawsuit dragged on through two mistrials.

A third trial resulted in an almost immediate decision by the jury for acquittal.  This announcement was followed by a written apology from the jury for all that Arbuckle had been through, but it was too late for Arbuckle. No film company would show his films or employ him because the film industry was working hard to sell the public on the fact that movies held to a high moral standard. Therefore, women and children were safe going to the movies.

Luke soon found work as Buster Keaton’s sidekick.  Keaton was one of Arbuckle’s protegés so he had already appeared in some films with Luke. Keaton and Luke soldiered on bringing more laughs and more pleasure to audiences. Eventually Keaton became powerful in his own right and was able to use Arbuckle in some bit parts and for some directing by billing him under a different name.

In 1933, the film industry decided they could afford to “forgive and forget,” and Arbuckle was given a contract with Warner Brothers.  He went out with a small group to celebrate the new contract, but that night—at age 46—he died of a heart attack.  Roscoe Arbuckle (his preferred name) was never to appear in another film again.

The movie industry, however, made their money on him. Once they decided it was safe to re-release the comedies in which he had appeared, they found themselves sitting on a treasure trove of film industry classics.

Luke had continued on with a very successful film career mainly working with Buster Keaton.  Arbuckle was often with him, as he came to work or spend time behind the scenes with his good friends in the film industry.  Luke died in 1926.

“The Coming of Luke,” by Robert Young, Jr. www.busterkeaton.com