Bummer and Lazarus were stray dogs who wandered the streets of

San Francisco in the 1860s, begging for handouts and patrolling the area for rats to kill. They were also good pals who were unified in all they did. Bummer was said to do the biting; Lazarus the barking.

The bond that grew between the two dogs attracted attention along Montgomery Street, the main street for restaurants and bars in San Francisco.  But Bummer and Lazarus had one other quality that strongly recommended them: they were excellent ratters at a time when rats were also a serious problem.

One day when a fruit stand was cleaning out an upper gallery, the men flushed out a huge number of rats. Bummer and Lazarus were right there to help with the clean-out, clearing the area of a reported 400 rats. Another time they were said to have killed 85 rats in 20 minutes.

While some felt sentimental about the pair, business owners came to seriously value having the two dogs around.

How Bummer and Lazarus Met 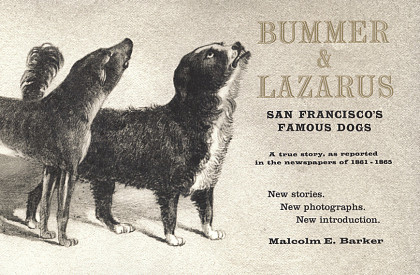 Bummer, a short-legged, black-and-white shaggy Newfoundland mix (“bull in his fighting quarters and Newfoundland in his vital parts”—Daily Evening Bulletin), was the first of the pair on the scene in San Francisco. According to research done by Malcolm E. Barker, author of Bummer and Lazarus: San Francisco’s Legendary Dogs, Bummer came to San Francisco with a reporter for the newspaper The Alta California (published for readers south of San Diego).  An article in that newspaper in 1861 said that Bummer would go along the street, looking for “an acquaintance or a lunch-eater,” and he persuasively bummed handouts, thereby earning his name.

Lazarus arrived under duress. He was described as a yellow-black cur, with long legs, smooth fur, and a weak chin. The dog was emaciated and being chased by a much larger street dog.  Bummer saw that the little dog was being threatened and stepped in to protect him. The big dog backed down, but by this time Lazarus had suffered a bad bite on the leg.  San Franciscans who stopped to observe the dogs didn’t think the smaller dog would make it.

After Bummer scared away the bigger dog, he let Lazarus limp to the 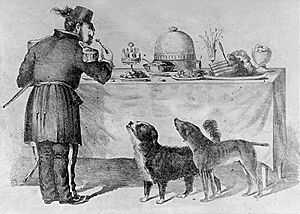 safety of a protected doorway.  For the first couple of days, Bummer brought back handouts for the dog. At night, Lazarus lay closest to the door and Bummer curled up around him to keep him warm. (This was also the beginning of their long-time sleeping position—the two dogs curled up in the doorway, Lazarus falling asleep with his head on Bummer’s flank.) As Lazarus improved, he would limp along behind Bummer as Bummer gathered food for both of them.

The cur gained the name “Lazarus” because those who had observed the fight couldn’t believe he lived—it was as if he had risen from the dead. (In the Gospel of John, Jesus restores Lazarus to life four days after he died.)

Martin’s, one of the bars along Montgomery Street, was a big hang out for newspapermen; the friendship of the two dogs and Lazarus’ recovery began to seem like good stories (particularly after a few drinks).  As a result, readers today have eyewitness reports as to the comings and goings of the dogs, though some of the stories are clearly “yarns.”

The dogs also caught the interest of French illustrator Edward Jump, whose cartoons were often published in the various papers.  For that reason, images of the dogs live on.

In the mid-nineteenth century, Bummer and Lazarus were not unique in western towns. As the population of communities grew, so did the presence of stray animals.  In Los Angeles in the 1840s, dogs actually outnumbered people by two to one.  San Francisco’s problem was less severe but there was still a high population of wandering dogs.

As the town became more overrun by dogs, the Board of Supervisors passed an ordinance in April of 1862 authorizing a dog catcher to pick up and destroy all dogs that were not claimed after a certain period of time.  This included Bummer and Lazarus.

Merchants stepped in to defend the pair.  Like barn cats that get rid of mice, Bummer and Lazarus were earning their keep on Montgomery Street. Restaurateurs and bar owners wanted to keep them around. A petition was started, and several hundred people signed; enough to get it introduced at a meeting of the Board of 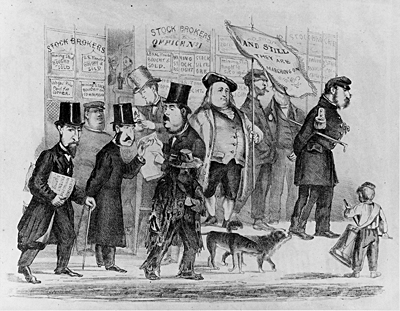 On June 17, 1862, the newspapers reported that the two dogs waited outside the supervisors’ meeting in order to hear their fate. If, indeed, Bummer and Lazarus were there, they were lured by a fine snack provided by a restaurant owner in order to bolster the case that was to be presented via the public petition. It is doubtful that the dogs stayed long after the snack was served.

And really, no need for them to stay. The meeting was well covered by the newspapers, and the Board of Supervisors agreed that the two dogs should be left untouched. Bummer and Lazarus were given the freedom to roam as they liked–winning hearts and killing rodents.

In 1863 Lazarus was poisoned with rat-bait laced meat.  The father of a young boy claimed that Lazarus had bitten his son, and therefore, the dog deserved to die.

After an uncomfortable night with Bummer at his side, Lazarus passed away. Bummer was said to spend the rest of the day looking for him in all the places the two would have gone.  Unbeknownst to Bummer, however, Frederick Martin (owner of Martin’s Bar) had taken the body to a to a local taxidermist to have him stuffed.

A couple of weeks later, proprietor Martin picked up the “new” Lazarus and brought it back to Montgomery Street. He was said to have shown it to a very puzzled Bummer before he put the dog on display at the bar.

In early 1864, The Daily Morning Call (7-31-1864) wrote that a young puppy was hanging around Bummer.  The reporter mentioned that it was too soon to know if this was a new “Lazarus.”  (It was later reported that Bummer’s lack of enthusiasm for the pup sent the pup off to seek his own fortune.)

Bummer lived two more years after Lazarus’ death, but reportedly he was not the same after losing his canine companion.  In 1865 he was kicked down a flight of stairs on Montgomery Street by a man who had too much to drink.  Bummer was clearly injured and died two months later.

The newspapers were competitive and were rushing to be first to report Bummer’s demise.  This resulted in several false reports of his death—and subsequent returns to life. The Daily Evening Bulletin (9-15-1865) wrote:

“This morning while a party of mourners were standing around his prostate body in Clay Street and lamenting his untimely end, Bummer suddenly jumped up and walked across the street with head and tail erect, looking fresh and hearty…”

These stories alternated between sweet tributes to the dog and jaded remarks like those of Mark Twain who wrote: “full of years, and honor, and disease and fleas;” Twain also felt Bummer would be forgotten in a few days’ time.

But there were also loving poems.  One reader submitted the following to The Alta California:

On March 28, 1992 a brass plaque was placed in Transamerica 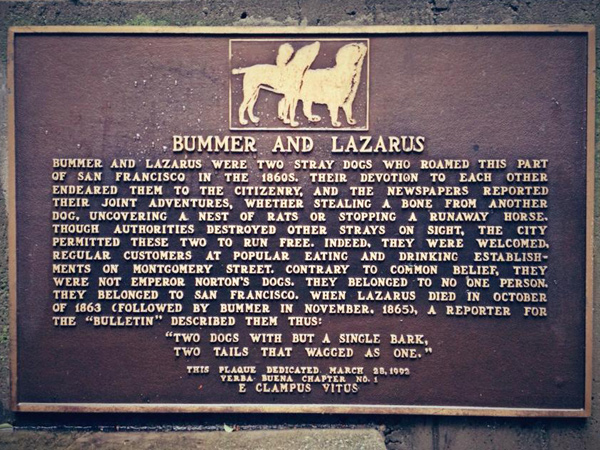 Redwood Park (at Montgomery and Columbus Ave.) to commemorate the two dogs from the 1860s:

Bummer and Lazarus were two stray dogs who roamed this part of San Francisco in the 1860s. Their devotion to each other endeared them to the citizenry, and the newspapers reported their joint adventures, whether stealing a bone from another dog, uncovering a nest of rats or stopping a runaway horse. Though authorities destroyed other strays on sight, the city permitted these two to run free. Indeed, they were welcome, regular customers at popular eating and drinking establishments on Montgomery Street. Contrary to common belief, they were not Emperor Norton’s dogs. [Norton was an eccentric fellow who roamed the streets of San Francisco for 21 years, claiming to be Emperor.] They belonged to no one person, they belonged to San Francisco. When Lazarus died in October of 1863 (followed by Bummer in November of 1865), a reporter for the “Bulletin” describe them thus:

“Two dogs with but a single bark, two tails that wagged as one.”

“Bummer and Lazarus: The Truth,” by Malcolm E. Barker, www.sanfranciscomemoirs.com