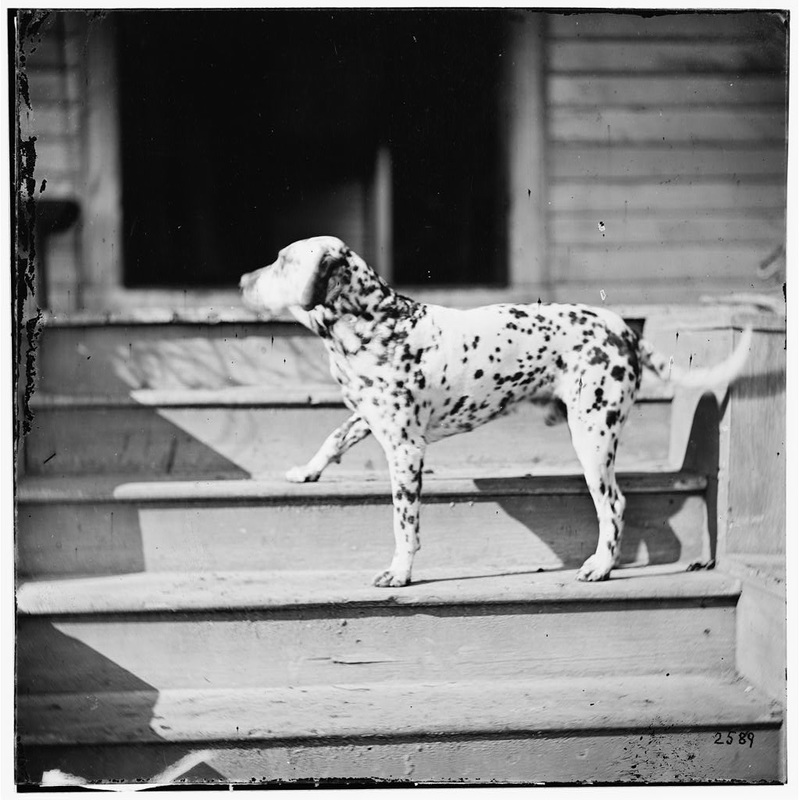 General Ingalls (1818-1893) returned from a short trip to Washington, D.C. accompanied by what was referred to at the time as a coach dog—the dog we now call a dalmatian.  The medium-sized spotted dog was clearly devoted to the general, and whether Ingalls traveled by saddle horse or buggy, the dog was by his side.

Ingalls was appointed Quartermaster General of the Federal Army by General U.S. Grant in 1864. By that summer, Grant saw that disrupting the supply chain from Petersburg, Virginia, to the Confederate capital of Richmond would be key. When the Union failed to take Petersburg in a first effort, Grant prepared for a long fight. He established his headquarters and a major Union supply depot nearby at City Point, Virginia.

It is reported that General Ingalls’s dog was the most photographed dog of the Civil War. While that’s difficult to document after all this time, it certainly makes sense.  The coach dog was not a breed that was often seen in the United States in the 1860s.

The origin of these dogs can be traced to Croatia in the 1600s, but they were not yet well-known in most other parts of the world. The one location where they became status symbols by the 19th century was among the wealthy of Britain.

British stable masters saw that the dogs were perfect for carriage work. The dogs were strong, smart, and fast, with good endurance. They were also excellent with horses. They could guide a team flawlessly and they had a calming effect on the horses if they became spooked.

Coach dogs could be seen running aside a carriage, but they were also adept at working from under the axles to keep the horses moving in the right way at the right speed.

These traits were how they came to be used at firehouses. The earliest fire companies had little money, so men pulled their own wagons and equipment. As fire companies became bigger, they added horse teams as well as dalmatians. Dalmatians could take the lead on the way to the fire. Then when the men unhooked the equipment from the horse teams in order to fight the fire, the dalmatian stayed with the horses, circling them, keeping them calm, and keeping them safe.

A Few Must Have Come to U.S.

As a result of their use by royalty and those of wealth in England, well-to-do Americans who visited England in the 19th century must have been familiar with these attractive spotted dogs.

Perhaps that’s how a coach dog found himself in Washington, D.C. and was available to go back to the Virginia headquarters with General Ingalls.

A Dalmatian at Headquarters

Ingalls was popular with both officers and enlisted men, and he was even more so as he walked through the camp with his dog. The men loved the sight of the handsome dog with the aristocratic bearing.

General Grant always remarked on the dog when he and Ingalls met or a ran into each other.  It’s clear the dog had quite a personality. 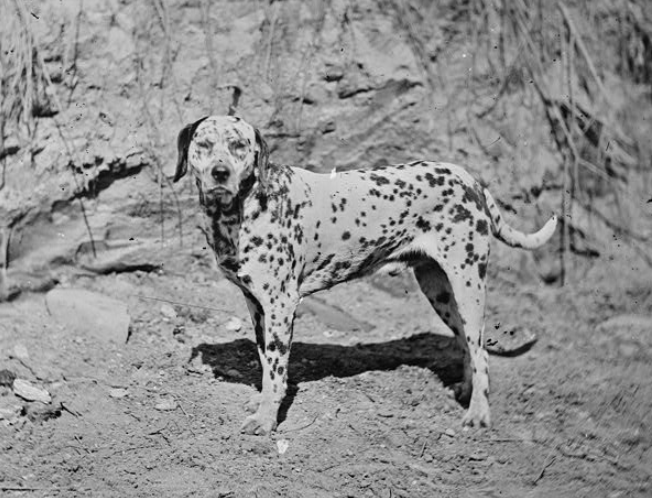 In Horace Porter’s book, Campaigning with Grant, we have a report of Grant-Ingalls interaction that includes the dog.

“One evening, as the general was sitting in front of his quarters, Ingalls came up to have a chat with him, and was followed by the dog, which sat down in the usual place at its master’s feet.

“The animal squatted upon its hind quarters, licked its chops, pricked up its ears, and looked first at one officer and then at the other, as if to say: ‘I am General Ingalls’s dog; whose pup are you?’

“In the course of his remarks General Grant took a look at the animal, and said: ‘Well, Ingalls, what are your real intentions in regard to that dog? Do you expect to take it into Richmond with you?’

“Ingalls, who was noted for his dry humor, replied with mock seriousness and an air of extreme patience: ‘I hope to; it is said to come from a long-lived breed.’

“This retort, coupled with the comical attitude of the dog at the time, turned the laugh upon the general, who joined heartily in the merriment, and seemed to enjoy the joke as much as any of the party.”

I am indebted to the contributors on the Civil War Talk forum for locating this wonderful description from Horace Porter’s book. It is one of the few times when we have more than a passing description of the dog.

The other mystery that plagues researchers is that the dog is not identified by name. I came upon one reference that noted that General Pickett (also a West Point classmate of Grant and Ingalls) referred to the dog as “Rufe.” Pickett fought for the Confederacy, so I was puzzled as to when Pickett would have encountered Ingalls and his dog.

After investigating, I saw that Pickett might have met the dog. After the war ended, Pickett left for Canada, but by 1866, Grant had arranged for Pickett to be able to return to Washington. Perhaps there he encountered Ingalls and the dalmatian.

For other stories of dalmatians, see “Trainer Willy Necker and his Dogs”  and “How Dalmatians Became Known as the Firehouse Dog.”