We are 150 years from the time of the Civil War, so during our first week of the Dog Days of Summer I wanted to be sure to include one of the dogs from that era. 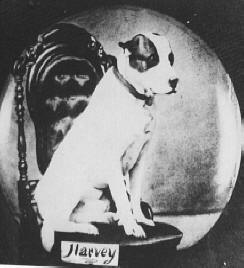 There are several key elements to keep in mind when we talk of dogs and the Civil War:

Harvey was a Bull Terrier that traveled with the 104th Ohio Volunteer Infantry–known as the Barking Dog Regiment because they had several dogs attached.  Harvey, mostly white with some black markings, became part of the unit in 1862 when his owner, Daniel M. Stearns of Wellsville, Ohio, joined the regiment.  Both Stearns and Harvey had had previous military experience with the Pennsylvania Reserve.

In November 1862 Stearns was promoted to 2nd Lieutenant, and he proudly fitted Harvey with a special collar with a nameplate that read, “I am Lieutenant D.M. Stearn’s dog, whose dog are you?”

Because many of the soldiers in the 104th wrote home about the antics of the dogs, there are some anecdotes that live on about Harvey.

One letter from Captain William Jordan written to his children on February 14, 1864 described actions of three of the dogs.  Two of them, Harvey and Colonel, were described as “having the run of the regiment.” They slept in whatever tent appealed to them on any given night, or sometimes the dogs could be encouraged to stand sentinel with the men on guard in the evenings.

The third dog, Teaser, makes an appearance in Jordan’s letter when the Captain tells of how Teaser made a run at one of squirrels that was considered a pet.  According to Captain Jordan, Harvey saved the day by picking the squirrel up in his mouth and depositing it out of harm’s way.

Private Adam Weaver wrote to his brother that Harvey attended campfire sing-alongs and was known for barking and swaying from side-to-side.  Weaver wrote that he thought this was because the singing hurt Harvey’s ears. 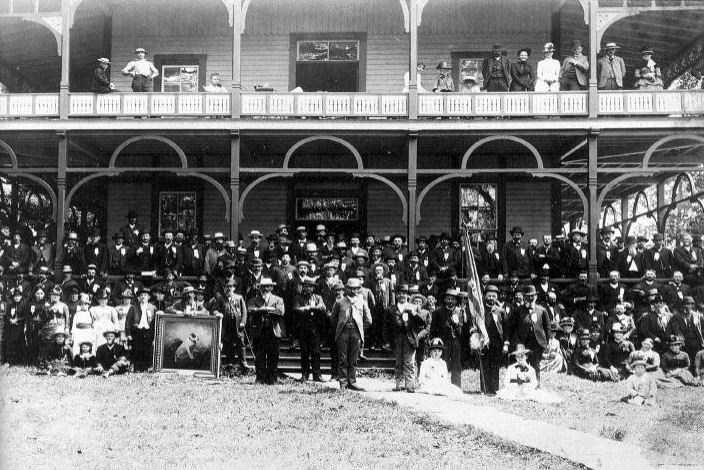 In 1864 the 104th was fighting in Georgia as part of the Atlanta Campaign.  Harvey was wounded and captured near Kennesaw Mountain, but he was returned the next day under a flag of truce.

Several months later, Harvey’s owner was seriously injured at the battle of Nashville but healed well enough to be with the regiment in North Carolina when  the Confederate Army surrendered and fighting stopped in the eastern theatre.  Stearns and Harvey finished their term of service there and in June 1865 they traveled to Camp Taylor near Cleveland where they received pay and were mustered out of the military.

Harvey presumably went home with Stearns afterward.  Though his final story is not known, he became a popular symbol for the regiment.  The reunion badges carried Harvey’s picture, and an oil painting that had been done of him was featured in the reunion photo that was taken in 1886, long after Harvey could have lived.

2 thoughts on “A Civil War Dog: Harvey and the Barking Dog Regiment of Ohio”