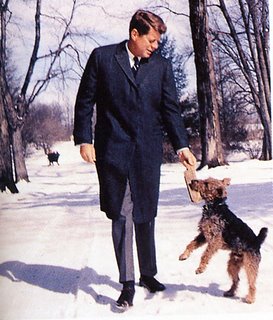 came into office with a young wife, Jacqueline, and two children, Caroline and John Jr. A third child, Patrick, died two days after his premature birth in August of 1963.

Like the Teddy Roosevelt family, the Kennedys were accustomed to having both children and animals in the household. When the family moved into the White House they brought along a gray cat named Tom Kitten, and the arrival of the next pet—a canary Caroline named Robin–made the AP wire shortly after they moved in (February 7, 1961).

The family dog, Charlie, a Welsh Terrier, stayed at the home of Mrs. Kennedy’s mother in Virginia until the family felt more settled, but Charlie was much loved by the family and a personal favorite of the President’s. Charlie loved paddling in the water when the President swam, and he considered himself pack leader when any other dogs were around.

The President also loved to have Charlie waiting for him on the lawn whenever he arrived in the presidential helicopter, according to a book by Traphes Bryant, a longtime White House staff member who took on the responsibilities of taking care of the Kennedy pets.

Spy Dog?
The most memorable dog story during those years was the gift sent to Caroline by Soviet Premier Nikita Khrushchev in 1961.  Khrushchev sat by Jackie Kennedy at a state dinner in Vienna, and they must have talked dogs. Soon the Soviet Premier sent Caroline a little white puppy named Pushinka (meaning “fluffy’ in Russian). Pushinka came with a passport that identified her as a “nonbreed” but specified that her mother was Strelka, the first dog sent into space by the Russians (August of 1960). 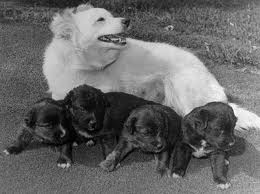 Pushinka was an instant hit with the family but because of the Cold War, Pushinka was taken to Walter Reed Army Medical Center to be examined before she was permitted to settle into her new home. Officials wanted to be certain the dog was not bugged with any hidden listening devices, microphones, bombs, or germs.

Soon after Pushinka was brought back to the White House, she also won the heart of Charlie, and eventually Pushinka and Charlie had a litter of puppies together, called “pupniks” by the President. When they were old enough to go to their own homes, the puppies all went their separate ways. One puppy was given to the President’s sister, Patricia Lawford; one was kept by the Kennedys, and two were given away to the winners of an essay contest of Mrs. Kennedy’s devising. She asked young people to write about the proper way to care for and raise a new dog. The White House received 5,000 entries, and in August of 1963, two winners were sent their puppies: One went to Mark Bruce, age 9, of Columbia, Missouri, and the other went to Karen House, age 10, of Westchester Illinois. (The New York Times, August 21, 1963.)

At Thanksgiving of 1962, Charlie and Pushinka were joined by Clipper, a German shepherd, given to Mrs. Kennedy by her father-in-law.

If the children were outside playing late in the afternoon, the President would sometimes step outside his office and clap his hands, which would bring children and dogs to greet him for an impromptu playtime.

Other Pets
Animals were a popular gift to the Kennedys while they were in the White House. John Kennedy was the first Roman Catholic president, and the Irish made clear their delight. The first gift from the Irish president was a pair of deer that soon had to be moved to the Washington Zoo. Later the Irish president sent along a more practical gift—an Irish cocker spaniel named Shannon. An Irish wolfhound named Wolf was sent to the Kennedys by an Irish priest, but Wolf did not get along with the other dogs so he was placed with another family.

The family also had parakeets (Bluebelle and Maybelle), a few hamsters, and for a time, a white rabbit sent by a magician. The rabbit drank beer was said to be able to play the first five bars of “The Star Spangled Banner” on a toy trumpet, but he soon was placed in another home as well. 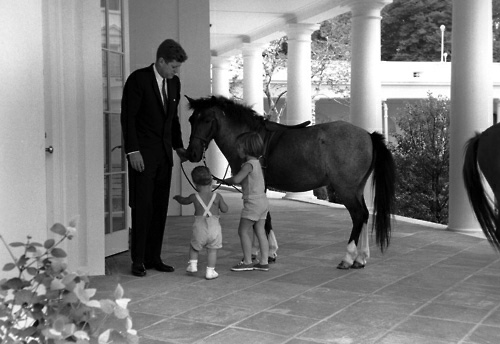 The Kennedys also had two ponies, Macaroni and Leprechaun. They were joined by a third pony, Tex, a gift from Vice President Lyndon B. Johnson. Jacqueline Kennedy was an avid and skilled horsewoman and wanted her children to be comfortable with riding and caring for horses.

While Macroni, Leprechaun, and Tex were primarily stabled at Glen Ora, an estate in Virginia the Kennedys were leasing, the ponies were often brought to the White House so the children could ride them. It was not unusual for passersby to be able to stop and watch the ponies grazing on the South Lawn.

In the winter there was also the occasional sleigh ride, courtesy of Mrs. Kennedy and Macaroni. On February 14, 1962 The New York Times featured a photo of Mrs. Kennedy taking Caroline and playmates for a sleigh ride with Macaroni in harness on the South Lawn of the White House.

“White House Pups Met New Owners,” The New York Times, August 21, 1963. (Pushkina’s puppies were given away via an application process.)

3 thoughts on “The Pets of President John F. Kennedy’s Family”