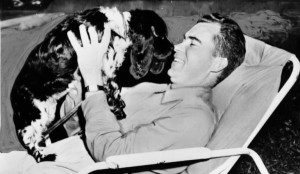 Richard Nixon’s “Checkers speech,” is referred to often enough that most people have heard of it. But few recall the details of what led up to the 30-minute, prime-time television special.  Here’s what happened:

In July of 1952, Richard Nixon (1913-1994) was nominated as the vice presidential candidate by the delegates attending the Republican National Convention. General Dwight D. Eisenhower was the presidential nominee. Nixon, 39, was a senator representing California at the time, and he accepted.

It was well known that the Nixons were not wealthy, and  even in the 1950s, campaigning was costly. Within a couple of months of the nomination, a news story broke about “Nixon’s Secret Fund.” The report focused on the belief that campaign donors were buying influence with Nixon by having set up a secret fund to cover his personal expenses.

The accusations were denied by those representing the Republican ticket. Campaign representatives said they had ordered an independent review and the claims about the fund were false. The fund existed but the money was used exclusively for campaign expenses.

The negative stories, however, did not die down. Eisenhower was being pressured to dump Nixon from the ticket.

Nixon Turned to the Public via TV 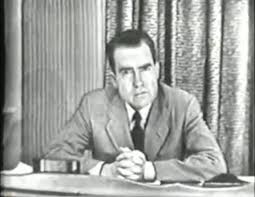 In a last-ditch attempt to save himself, Nixon opted to appear on national television. He addressed the public in a 30-minute speech. He spoke from behind a desk with Pat sitting a bit behind him and to the side.

Nixon began by revealing his personal financial situation and talked about the fact that the independent review found him blameless. He talked of many things, including Pat’s cloth coat (as opposed to a mink coat that a well-to-do woman the day might wear). At that reference, the camera pulled back to reveal Pat listening solicitously.

Nixon and Checkers the Dog

He then continued, talking about a recent gift that had been given to the family:

“One other thing I probably should tell you because if we don’t they’ll probably be saying this about me, too, we did get something –a gift—after the [Senate] election. A man down in Texas heard Pat on the radio mention the fact that our two youngsters would like to have a dog. And, believe it or not, the day before we left on this campaign trip we got a message from Union Station in Baltimore saying they had a package for us. We went down to get it.

“You know what it was? It was a little Cocker spaniel dog in a crate that he’d sent all the way from Texas. Black-and-white spotted. And our little girl—Tricia, the 6-year-old—named it Checkers. And you know the kids, like all kids, love the dog and I just want to say this right now, that regardless of what they say about it, we’re going to keep it.”

The speech, now known as the “Checkers speech,” was heard by a very sizable audience—approximately 60 million Americans.

The week Nixon gave the speech, he also released his tax returns as further proof of what he was telling the public. This was the first time that a candidate’s tax return had been made public—a practice we have now come to expect of candidates. 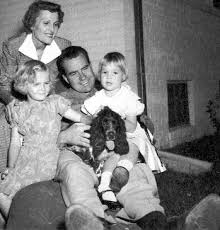 The speech concluded with Nixon requesting that the audience write to the Republican National Committee as to their opinion on whether he should stay on the ticket or be dropped.

The overwhelming number of phone calls and telegrams were in support of Nixon. And of course, Richard Nixon remained on the ticket.

Eisenhower and Nixon won the election over Adlai Stevenson by 7 million votes.

As for Checkers, he went on to live a long and happy life with the family, dying in the fall of 1964. To read about other dogs in the Nixon White House,  click here.

And here is the Checkers speech in full.

1 thought on “Richard Nixon and the Checkers Speech, 1952”