The very thought of going to the airport today brings up a feeling of dread in most of us—the stress of preparing for a trip, the inconvenience of going through security, the uncertainty of when your plane will actually leave if there are delays.

In addition, there is the emotional stress of good-byes.  Many travelers—including many of our military personnel—are leaving behind loved ones, making a departure a very tearful time.

Dogs to the Rescue!

Therapy dogs are being used in many different environments, and now a few airports are beginning to experiment with using them in the air terminals. San Jose began  program right after 9-11, Miami added a program about two years ago.

Now the newest program, one at LAX (Los Angeles World Airport), is also the biggest. “Pets Unstressing Passengers” began on April 15, 2013, and they already have thirty teams of volunteers and dogs who are assigned to make visits to various terminals.  Greeting arriving military who come into the Bob Hope USO headquarters at the airport is also an important aspect of their job.

Heidi Huebner, Director of Volunteers at LAX, is the person responsible for pulling together the program.  “Our executive director at LAX had seen the dog therapy program being used in San Jose and suggested we explore bringing it here,” she says.

Huebner also oversees the 350 volunteers who participate in the airport Volunteer Information Professionals Program, and her background as a former director of volunteers at the Los Angeles Animal Services office made her the perfect person to figure out how to bring this program to LAX.

“We needed to find the right organization with which to partner so that we knew that all the teams met certain standards,” says Huebner.  “Then we had to outline the guidelines under which the teams would operate.”

Therapy Dog, Inc. is the organization selected to work with LAX.  The animals are tested and observed in a working environment to be certain that all qualifications of a therapy team are met by both dog and volunteer.  In addition, LAX requires that all teams have been working as a team for at least one year before working at the airport.

The human volunteers also must have background checks since they are working within the circle of airport security. (They still go through screening just as airline personnel do each time they arrive to volunteer.)

All types of dogs are part of the program. To name a few: an Irish wolfhound, a Doberman, a poodle, a pit bull mix as well as some other mixed mutts, a Rottweiler and a long-haired Dalmatian.

Marwick Kane is an owner who sometimes brings his Doberman, Jackie, who is also trained as a therapy dog. “I like bringing her here so that people can see the breed and know that they can be as sweet as any other dog.”

Part of Huebner’s operation involves a training program about the airport.

“I want the volunteers to be knowledgeable,” she says. “When they stop to talk to people, they may be asked about the location of rest rooms, a coffee shop, an ATM machine, or a ticket counter.  I want them to have the answers.

“In addition, we’ve set guidelines for managing the therapy dogs if they encounter other dogs.  They learn that if a police dog is coming in with an officer, the therapy dog is to go a different direction in order not to distract or get in the way.

“The same is true with passengers’ dogs.  We totally trust all our therapy dogs, but we can’t guarantee the behavior of the passengers’ dogs so avoidance is the easiest solution. 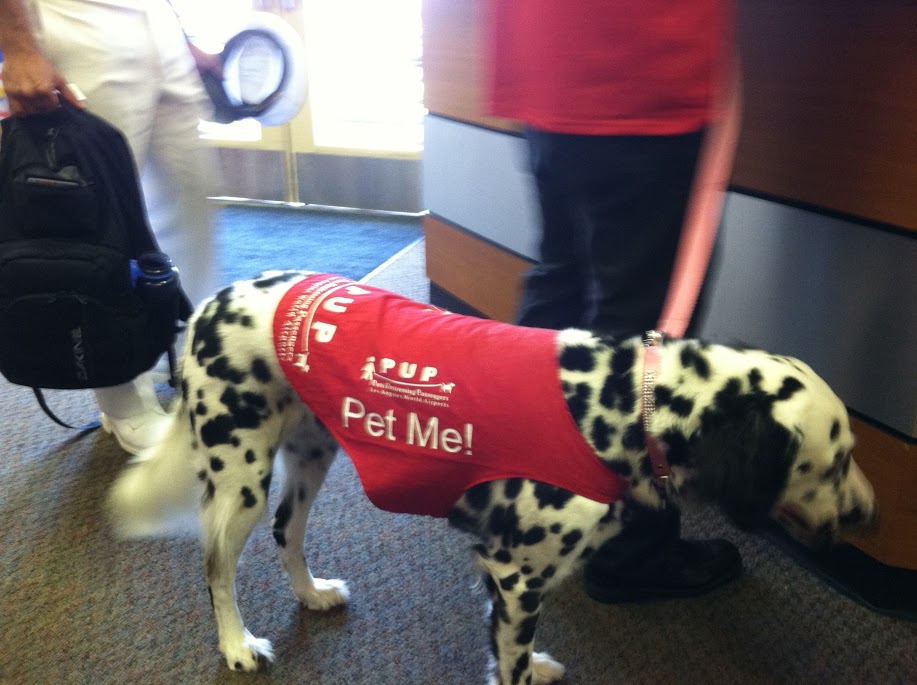 The dogs wear red vests that say “Pet me;” the volunteers wear red vests with the PUP logo.  Because the program is new, people sometimes think the dogs might be bomb-sniffing dogs, but the “Pet me” vests distinguish that these pets are there to interact with passengers.

“Depending on how busy it is, it can be stressful for the animals so while they are assigned to 2-hour shifts, the volunteers know that they are free to leave or take a break whenever they think the dog has had enough.

The human volunteers are well-versed at “reading” their dogs.  “The dogs always come first,” says Lou Friedman.  “If Hazel needs a break, I give it to her. If she seems thirsty, we stop and I give her water.”

On the day I visited LAX I had the pleasure of accompanying Hazel, a pointer mix, and her owners Barbara and Lou Friedman, as well as Kai, a long-haired Dalmatian, with owner Marwick Kane. Our destination was to the Delta Terminal.

As we entered, we were warmly greeted by some of the TSA personnel who ushered us to a security line where the dogs and volunteers were all checked through security.

Even here, the volunteers have an impact.

“The security people don’t have easy jobs so if the dogs brighten their day, we are off to a great start,” says Huebner.  “And when passengers see the security people warm to a dog, it humanizes them.  They realize that the person who has to make them take off their shoes and pull out their liquids is just like them…just having to do a difficult job to keep the airport safe.”

After security, the teams paused to meet and greet and be photographed by many of the families clearing security.  Both dogs were soon circled by people, and only over time did we move slowly toward a few of the waiting areas. “Some days we barely get out of security,” says Lou Friedman with Hazel.

“We have to be aware of people who are afraid or people with allergies and steer clear of them,” says Barbara Friedman as we walked into an area where people were waiting for a flight.

The body language that day involved open smiles and picture-taking; there were also some hidden half-smiles on adults who then welcomed a little encouragement to come to pet the dogs.  One older fellow, on holiday from Australia and on his way to Napa Valley, was very shy in the beginning but then hugged and petted Hazel, telling us about his own dog who was no longer living.

Other people brought out iPhones to show us the picture of the dog they left at home.  Many of the people were just departing, and the pain of having to leave the pet for a week or ten days was very much on their minds.

As we walked through the terminal, we were part circus attraction and part welcome wagon. People were getting off their flights and moving toward exits for ground transportation, and they were thrilled to be greeted by friendly volunteers with happy four-legged greeters in tow.

“You can just feel the atmosphere change when a dog with a “Pet me” vest walks through an area,” says Huebner. 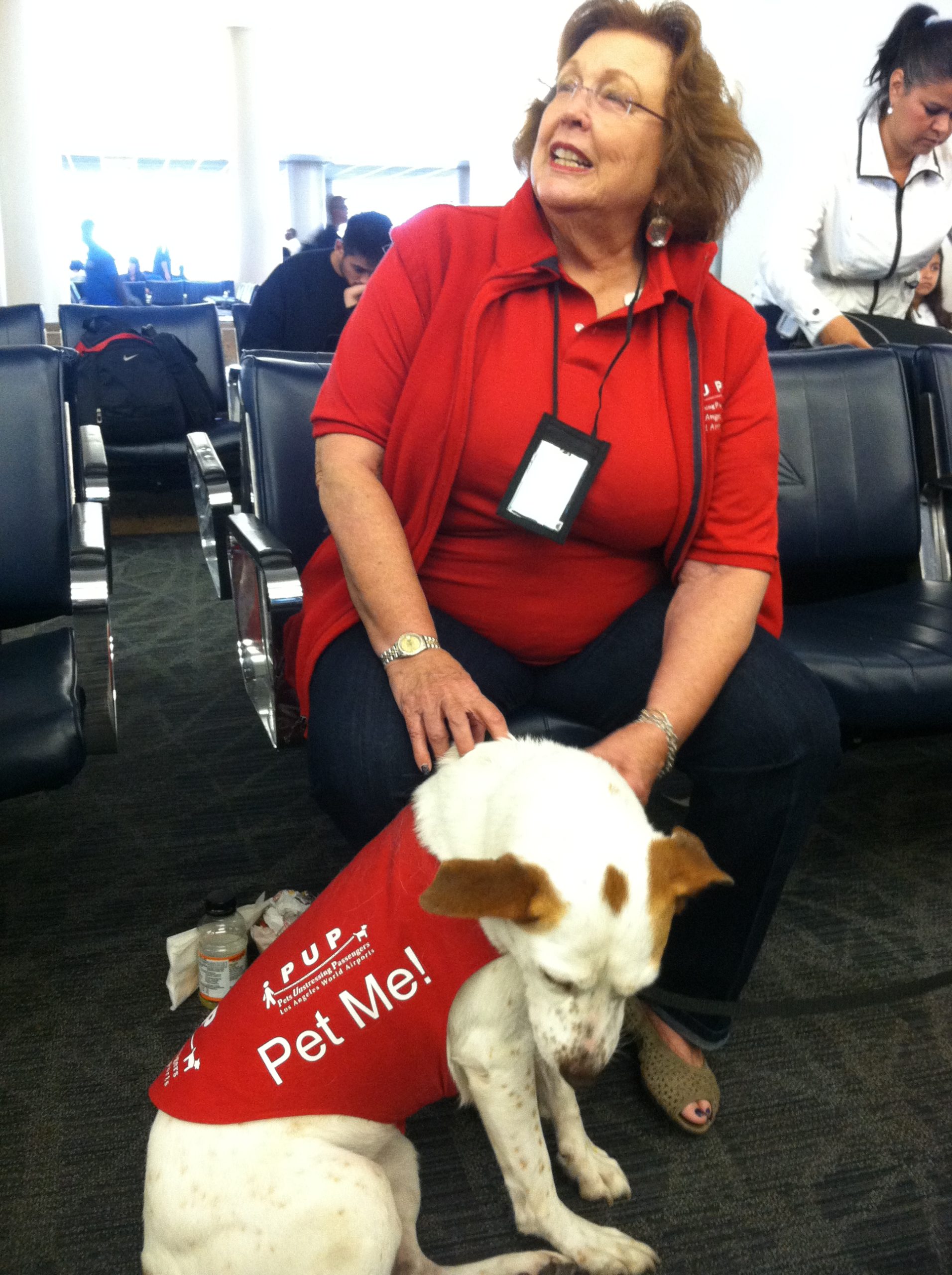 Thinking of the Future

Huebner is intent on two goals.  The first is growing the LAX program.  Though she is already running the biggest program in the country, she wants more teams to cover more days and more hours.

She also wants to help spread the word about the program.  To that end, she is giving a speech in October to an organization involved with airline terminal management explaining how the LAX program was established and how it runs.  She stresses that she is always available to answer questions from other airports who might like to take the same steps taken by LAX.

As for the volunteers, they love coming. One of them said to me: “How often do you have a chance to bring happiness somewhere just by showing up? It feels wonderful.”

4 thoughts on “The Latest in Therapy Dogs: Calming Passengers at Airports”