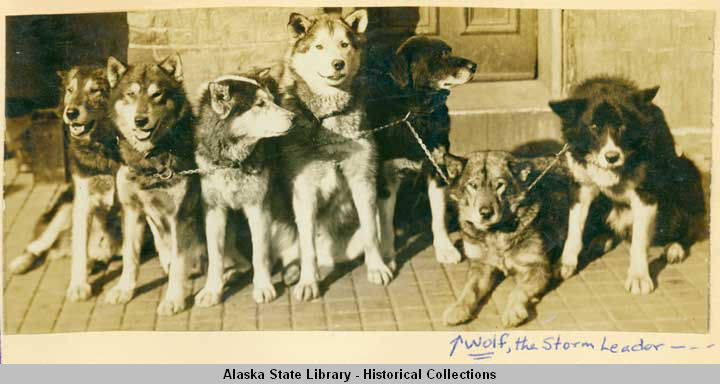 A sled dog team making its way from Nome, Alaska, to Washington, D.C. in 1907 grabbed headlines across the nation.

The trip was 8000 miles through snow drifts and grasslands and was a wager undertaken by Eli Smith, musher and postal employee. Smith left Nome in November of 1905 with an eight-dog team led by a wolf that Smith rescued when a pup.

In August of 1896, gold was discovered in the Klondike region of the Yukon. An estimated 100,000 prospectors made their way north to Canada in search of gold. Photographs show lines of men with backpacks traveling to the gold fields, but those who knew Northwest Canada had dog sleds to carry their equipment and speed travel. 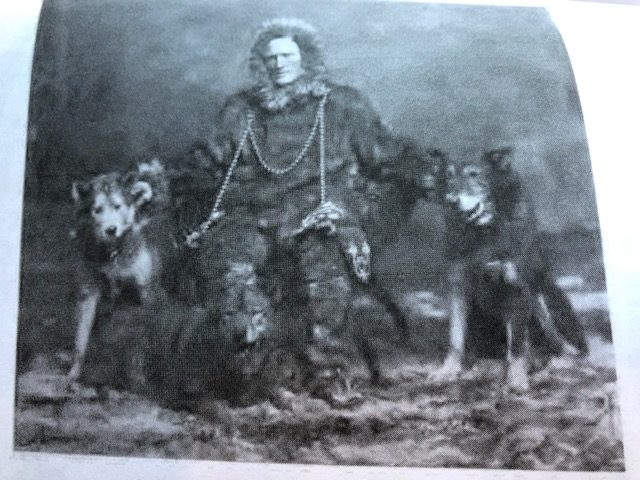 Eli Smith (1856-1948) was one of many men in the region looking for gold. Like others, Smith had some good luck—and then a lot less good luck.

As he prospected, He traveled with a strong dog team. According to the book, Wolf, the Storm Leader, Smith used huskies (“malamoots”), “Siwash” dogs (native dogs that weren’t huskies), and a few “outside dogs” (regular dogs that were good as part of a team).

One day Smith ran into a man who was dragging with him an injured wolf pup. Smith disliked mistreatment of any animal and offered the man some gold dust for the wolf. The fellow happily agreed to the trade.

The pup was in need of medical attention, so for the first few days, Smith kept him inside his cabin in Dawson City in the Yukon. When Wolf was better, he lived outside chained to a stake as the other dogs were. Sometimes Smith would take him with him to town but always leashed.

As winter arrived, Smith harnessed the dogs for the work at hand. Sometimes they brought back wood for the fire; other times, he used the team so that he could visit his sluice boxes to take care of any repairs necessary. 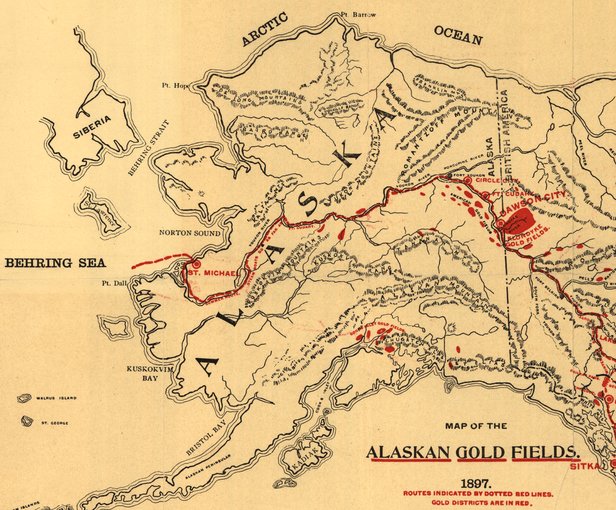 Slowly, Smith began to experiment with adding Wolf to the dog team. Wolf was happy to work, and over time, he proved to be an exceptional team leader. Because wolves have a superior sense of smell, Wolf could pick up scents that eluded most dogs. Many times that helped them find their way home.

News traveled slowly in gold country. Miners in Dawson City had infrequent deliveries of the U.S. mail, or they awaited travelers who might bring news.

In late 1898, the miners were particularly thrilled to hear that gold was discovered in Nome. Hope was dimming for more gold in the Klondike, so even a 60-day journey from Dawson to Nome seemed worthwhile.

By the fall of 1899, most of the Klondike miners were breaking camp and setting out for Nome, and Smith, too, was ready for the new adventure. It would be a long trip through wicked conditions, so Smith packed food and supplies carefully. Wolf had been with Eli for three years by this time, and he was very much a part of the pack.

As Smith and his team traveled, they frequently saw men and dogs whom they knew from Dawson City.

The Trip to Nome 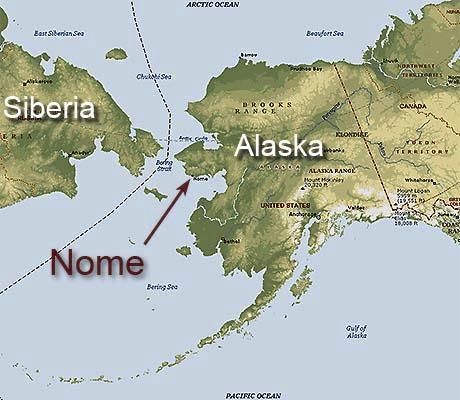 Among the men, Smith was among the most careful with his animals. The sled dogs  that were not part huskies or part wolf needed leather “booties” to protect the pads of their feet for the long journey over ice. Smith was one of the few who took the time to create leather footwear for his dogs.

When they reached the stretch of trail near the Bering Sea, they encountered a storm that gave Eli pause. It came up suddenly and the winds were extraordinarily fierce. The temperature dropped quickly to the range of 60 below. This was one of the first times when Eli realized Wolf’s worth. Because Wolf could pick up scents from beneath the snow cover, he always knew which way to go.

No Luck for Eli in Nome

Eli Smith did not have early luck in Nome, so he needed other work. When he heard the U.S. government was paying well for mushers who took a mail route, he signed up. The work was hard. The mail was heavy and the distances were long, but he had a good team and knew he could do it.

Smith was assigned one of the most difficult routes, a 350-mile run from Nome to Unalakleet through some of the most storm-prone territories. He acquired a partner, so that they could rest between runs. Between the two men they also added more dogs and built their own lightweight sleds. Because of the weight of the mail, the dogs were harnessed in pairs and were fed three times each day instead of just twice.

Life as a mail carrier soon proved challenging but manageable, and Smith was happy with the work.

Though Alaska did not become a territory until 1912, the District of Alaska gained a representative in Congress in 1905. Locals wanted to make Congress aware that Alaska needed investment in roads and railroads.

With that in mind, a wager was offered by a fellow named Lucky Johnson (sources do not agree on who offers the wager; Johnson is mentioned in Frank Caldwell’s book). For any musher who traveled from Nome to Washington, D.C. Johnson offered  a $10.000 reward. (Some accounts say only $5,00 was offered.)

-The musher must leave Nome with 10 dogs and arrive in Washington, D.C. with at least six dogs from the original team.

-He must arrive in Washington before February 22, 1907, to be there before Congress adjourned for the 1907 term.

-He must visit President Teddy Roosevelt to discuss Alaska’s needs and receive from the president a signed note that established date of arrival.

Smith knew what a great team he had and accepted the challenge. He found someone to take his mail route during his absence. The trip was 8000 miles, and it would be a hard go. He wasted no time and left Nome on November 14, 1905.

With Wolf as leader they made the difficult passage past Unalakleet, across the portage and on to Nulato, From there they followed the Valdez Trail to Fairbanks where they boarded a ship for Seattle. The dogs did not like the ocean passage and were glad when the team stepped out on land again.  As the weather warmed in the northwest, the sled became difficult to pull. One of the farmers with whom Smith and the team stayed offered to add wheels to the sled to make the going easier.

Press Coverage as They Traveled 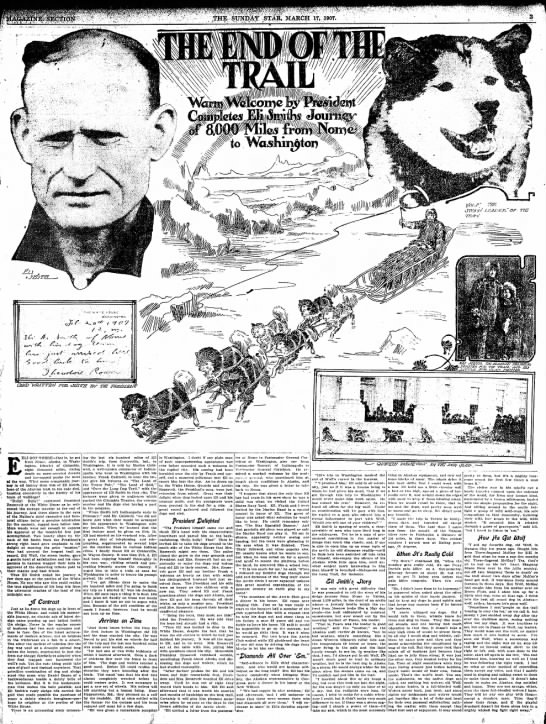 As Eli Smith’s sled dog team traveled through states in the Lower 48, he attracted attention and press. One of the questions he frequently received concerned how he remained motivated and kept the team going.

Smith noted that the dogs all knew their names, so mornings began with Smith calling each dog by name. He would receive a tail wag and the appropriate canine stepped forward for his harness.  As the day wore on, he kept up a patter with them.

“I never whip my dogs, but I talk to them, whistle tunes for them, and sing to them. They like musical sounds, but aren’t picky. It doesn’t take a very high class of music to please them.”

Smith also said that at night, the dogs made their own music. Huskies (and wolves) don’t bark but they do howl. In the evenings, Smith fell asleep listening to Wolf and the huskies calling around to other wildlife in the area.

Along the way, there were some surprises. A report in The Star Press in Muncie, Indiana, reported that the dogs sometimes encountered farm animals. Along one rural road, a flock of chickens startled and flew up from behind a stone fence.  Even in harness, the dogs made quick work of creating their own chicken dinner.  As usual when these things happened, Smith found the farmer and made good on the fellow’s loss.  And chickens were cheaper than the calf they took down. “My dogs will kill anything but not a human being,” explained Smith. 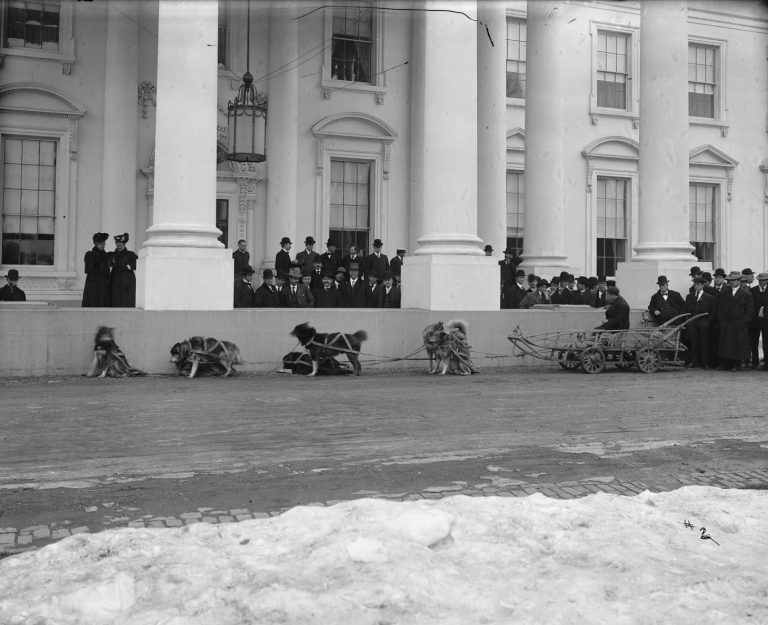 On February 2, 1907, Eli Smith and the team could be found traveling up Connecticut Avenue to the White House, attracting a lot of public attention. He drove the only sled dog team amidst  horse-drawn wagons, buggies, and early automobiles. It was one year, three months, and six days since the day he left Nome.

When he pulled into the muddy drive that led to the Executive Mansion, the President was alerted. Within moments, Teddy Roosevelt came out to greet Eli Smith and to say hello to all the dogs. “Bully, Bully! Fine,” were the words the press could hear the president saying.

To their great good fortune, Roosevelt’s sons, Archie and Quentin, arrived home from school while Smith and his team were still outside the White House. The dogs were snoozing in the winter sun, and the boys were delighted to join in the conversation. The press caught a photo of Quentin sitting in the sled after he was introduced to each of the dogs. 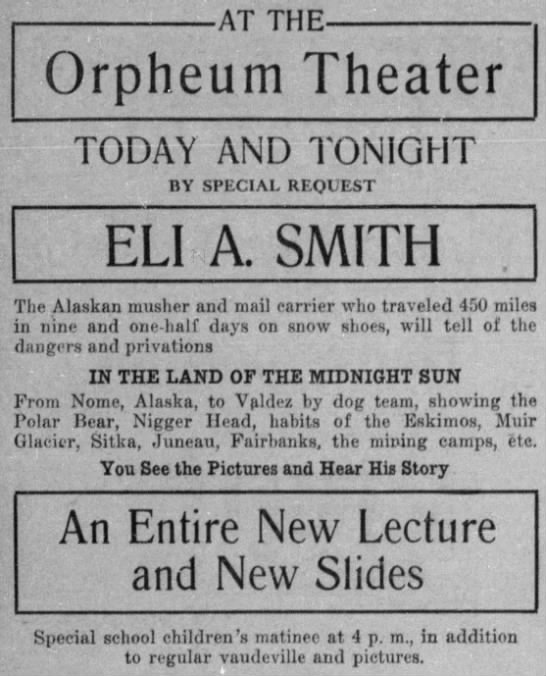 Then Roosevelt suggested that Eli bring the dog around to the back of the house so Mrs. Roosevelt could admire them, too. Smith put the dogs through their paces to demonstrate the work of a good dog team, and Eli was invited to return to the Executive Mansion for dinner later that evening.

After the successful completion of their journey, Smith and team were to return to Nome, but they had been joined by Frank Caldwell (1867-1938). He was a a lecture agent who was sent to Alaska to help spread the word about religion to the men in the gold fields.

Frank Caldwell met Eli Smith in Alaska, and he saw great potential in Smith’s story. Caldwell provided photographs for a magic lantern presentation for Smith to use, and he set up lecture dates along the route home. Smith continued to tell people about the wonders of Alaska, introduced the dogs wherever he was, and made some money on the way home.

One of the most frequently asked questions concerned Wolf. Would he consider selling him? Smith’s answer was always the same: “Would you sell one of your children?” 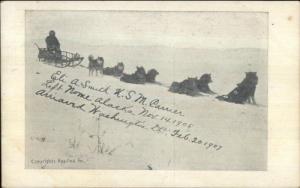 As for Wolf, he did all that he was supposed to do to make the trip possible. Eli Smith rewarded him by removing his harness. From that day forward, Wolf either ran free alongside the team, or if he tired as old dogs can do, he hopped into the sled and rode for a time.

When Smith returned to Alaska, they settled down in Nome, but soon a new strike occurred further north. Like the other prospectors, Smith and his team went along for the next adventure.

True to his promise, Eli Smith kept Wolf—the best storm leader in all of Alaska—with him for the rest of Wolf’s life.

For another story about the dogs of Alaska, read The Iditarod: Also about Exploration of Alaska.

Photographs from Alaska State Library and one photo from Frank Caldwell’s book.