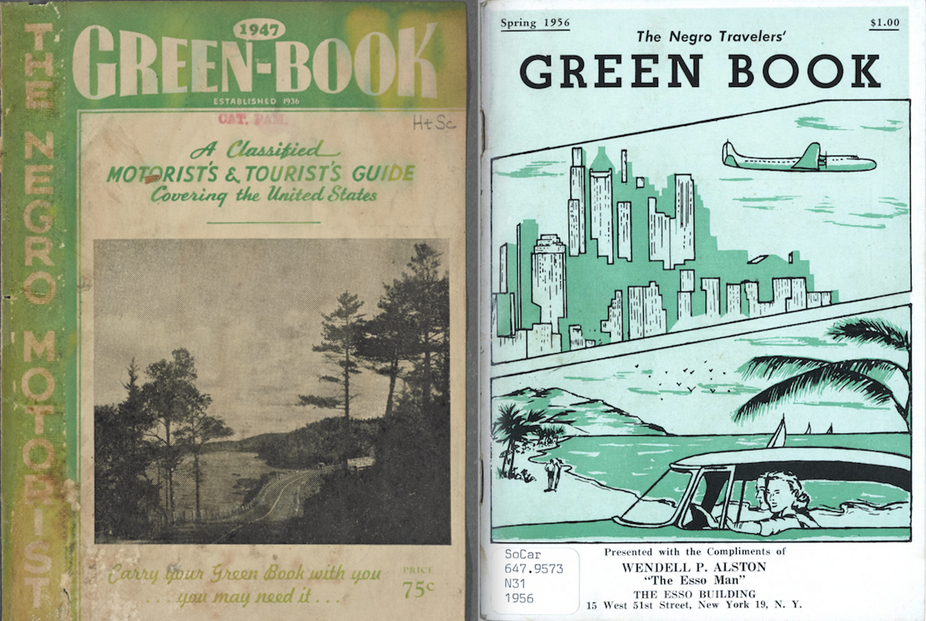 • Victor Green’s book (The Negro Motorist Green Book), was a travel guide for African Americans. It was needed because of Jim Crow laws.

During the 1940s and ‘50s, Americans began taking to the road. Increasingly, more business conventions were being held in various parts of the country, Salesmen, athletes, and entertainers were also traveling for business. People were also beginning to take car trips for pleasure. But Jim Crow laws made it difficult for African American businessmen or for families to travel.

Bus or train travel by African Americans subjected them to poor treatment, and they were always relegated to the worst part of the train car or the bus.

But car travel for African Americans was also fraught with difficulties. Finding a place to buy gas, food, use the bathroom, or sleep overnight were among the challenges black people faced.  They generally packed food to carry with them, brought along extra gasoline, and if they were worried about bathroom facilities they brought along something to use as a portable toilet. Those who traveled for business generally arranged to stay with relatives or friends. They knew locating a motel or a friendly restaurant would not be easy.

If families were to take to the road to visit relatives, parents wanted to spare their children from the humiliation of being refused service or admittance. 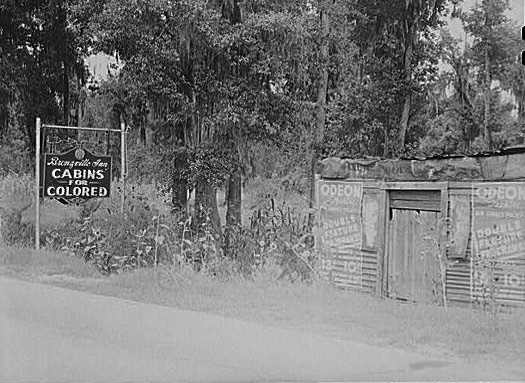 The problems involved were not simply a matter of inconvenience. A road trip in many parts of the country could entail uncertainty and risk. Many police forces thought nothing of stopping drivers based on their color. Some travelers simply “disappeared.”

There were at least 10,000 “sundown towns” in the United States as late as the 1960s. In a “sundown town” nonwhites had to leave the city limits by dusk, or they could be picked up by the police. These towns were not limited to the South—they ranged from Levittown, New York to Glendale, California, and included the majority of municipalities in Illinois.

African American drivers learned to travel in a chauffeur cap (or at least have one beside them).  If stopped, they could announce that they were delivering a car for a white person.

Victor H. Green (1892-1960) started his adult work life delivering mail in Hackensack, New Jersey. (While he and his family eventually settled in Harlem, he always maintained his job with the New Jersey Postal Service.) While in Harlem he undertook managing his brother-in-law’s  bookings as a musician. Perhaps through this experience, Green began hearing the terrible tales of what befell African Americans who traveled.

Travel guides existed for Jewish people, because they, too, encountered discrimination on the road. Green began planning his own guide. He used his connections within the National Association of Letter Carriers to gather information on various regions.

In 1936, he published the first edition of his book, The Negro Motorist Green Book.  It provided information on the New York area as to where it was safe for blacks to stop, buy gas, eat, and spend the night. In some places, there were no hotels or motels that would accept African American guests, so Green listed “tourist homes,” where families would rent a room to a traveler.

Word spread about the guide book, and Green sold it by mail order and through black-owned businesses. Esso was one of the few gas stations that offered franchises to African Americans,

so Green also found they would sell his Green Book.

The book attracted the attention of Charles A.R. McDowell who was the collaborator on Negro Affairs for the United States Travel Bureau. McDowell worked with Green to secure more broad-based information.

When Julian Bond was president of the NAACP (National Association for the Advancement of Colored People) he said, “It was a guidebook that told you not where the best places were to eat, but where there was any place.”

From 1942-46, publication of the book was suspended because of the war, but Green began publication again in 1947. That year he also started a Reservation Service. The offices were on West 135th Street in Harlem. The Service operated as a travel agency that could book travel plans according to where an African American traveler wanted to go.

By the 1950s, the book had been renamed The Negro Travelers’ Green Book. Green eventually expanded it to make recommendations throughout the U.S. and in Bermuda and parts of Mexico and Canada. He also began to list other services, including barber and beauty shops, drugstores, and night clubs where African Americans were welcomed.

As the popularity of the book grew, Green also saw a need for adding informational articles. Shortly after he passage the GI Bill in 1944, Green published articles on schools for black veterans, and how to obtain additional money for those who hoped to attend college.

Green Foresaw a Day When Book Might Not be Needed

In the introduction to his first guide in 1936 Green wrote: “There will be a day sometime in the near future when this guide will not have to be published. That is when we as a race will have equal rights and privileges in the United States.”

This eventually proved more or less true with the Civil Rights Act of 1964, and the beginning of laws that prevented racial discrimination. Green passed away in 1960, so he did not live to see this day. His family kept the book going until 1966 when the last edition was published.

Some say Victor Green’s Green Book might have been all but forgotten had not author Calvin A. Ramsey been planning to travel to a friend’s funeral in Atlanta in 2004. The deceased’s grandfather lived in New York and had not been in the South in recent years.  He asked Ramsey where he could get a “Green Book.” This set Ramsey on a path to uncover the story and write a play and a children’s book about the travel challenges confronted by African-Americans.

The Henry Ford Collection at the University of Michigan has a 1949 edition of the Green Book, which has been posted online as a PDF. This permits today’s readers to check out what was happening in their communities in the late 1940s.

I grew up in Pueblo, Colorado, so I immediately turned to the section on Colorado and saw that there was one hotel and one tourist home listed in Pueblo. There was no service station, no drug store, and no restaurant listed.

Once a visitor arrived at one of the places mentioned, it was probably possible to get a few local recommendations for other services, but the paucity of listings certainly paints a clear picture of the traveler’s dilemma. In Colorado during that time, African American travelers would need to be in  Denver to be assured of finding food, gas, and lodging.

An interesting article from the Arkansas Democrat Gazette (1-27-2019) tells of the former Green Book places in Arkansas. Latimore Tourist Home in Russellville was landmarked in 2011. Unfortunately there have not been funds to keep it in good condition but it still stands. The article was sent to me by a reader–thank you!

For a story of Jackie Robinson’s experience trying to fly from Los Angeles to Florida for spring training click here.

This link takes you to the New York Public Library where multiple copies of the Green Book can be found.