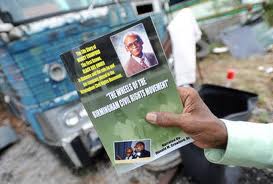 In 2006, several years before his father’s death, Donald M. Crawford, Sr. had the foresight to sit down with his father and record his life experiences as a black business owner in Birmingham, Alabama. His stories begin in an era when Jim Crow laws were in effect, and continue through the civil rights era and beyond. The resulting book, The Wheels of the Birmingham Civil Rights Movement, tells an important story of everyday life for African- Americans in the South from the 1940s through the end of the century.

“My father’s first memories were of his own father, a sharecropper, worrying about how he was going to feed his family since the land owner took the bulk of the produce. From that day forward, my father resolved that he was going to have his own business, but for many years he also held a full-time job and ran the business on the side,” said Donald Crawford, Sr., a jazz musician and band instructor in Birmingham, in an interview with me on April 12, 2011.

Starting Out
Donald Crawford’s father, Worcy, attended school while always holding part-time jobs. He eventually left home for the big city (Birmingham) where he got a job with a mining company, beginning what would be 38 years of service for the Woodward Coal and Mine Company. (All his entrepreneurial efforts were in addition to holding a full-time job with the mining company.)

In the meantime, Crawford met and married his wife, Christine, and they started a family. Crawford was always looking for ways to increase his income, and he invested in a club and a café. Crawford turns down the offer of a “fast buck” by a fellow who offers to set fire to the club so Crawford can collect insurance money. In this and other instances, Crawford chooses to do the “right thing.”

Negro League Baseball Team
Crawford owned a 1936 Chevrolet truck he sometimes used to haul coal. In the summer of 1949 the manager of the Ensley All-Stars, a neighborhood baseball team that had started playing in the Negro Leagues, approaches Crawford about using his truck to provide transportation to the games so the players didn’t have to drive themselves—the game schedule was daunting and the players welcomed a break from having to drive from game to game. Since Crawford was always looking for a legitimate way to earn extra cash, he agreed.

The team travel brought Crawford and the team into the realities of dealing with a white world with Jim Crow laws. The team’s popularity took them through Alabama, Georgia, Mississippi, and the Carolinas. Crawford’s job at the mine meant that others often drove, but Crawford was with them often enough to experience that when they stopped for gas, there were generally no restrooms for blacks. The team carried their own food as there were few places where they could buy anything to eat. If they had to stay overnight they needed a friend or relative to put them up– there were no motels that would accept African- Americans.

During the early 1950s, the Ensley All-Stars played a game against an all-white baseball team in Laura, Mississippi. The score was close, until they were approached by a resident of Laura

who told them, “You Niggers better lose this game if you want to leave Laura alive.” As the book states: “That convinced the guys that winning the game wasn’t worth losing a life.”

The Business Beyond Baseball
Though the Ensley All-Stars folded in 1953, Crawford had replaced the coal truck with a school bus as the old truck had seen better days. He soon found that other places, including church groups, wanted to hire him to drive their groups from destination to destination; in the South no Greyhound charter was available for African-Americans.

When Crawford went to the county clerk to get the required license for operating a bus company, the people in the county clerk’s office laughed at his request, responding with: “Ain’t no such things as a Nigger bus company.” The fellow in the office proceeded to explain that the only kind of black-owned bus that would be eligible for a license would have to be a church vehicle.

When faced with this obstacle, ingenuity came to his rescue. Crawford contacted an attorney and worked out a deal with the Trinity A.M.E. Church. He went back and applied for a bus license for the Trinity Church. It cost $1.50 instead of the $22 a commercial license would have cost. In addition, insurance rates were lower for church vehicles, and churches were exempt from income tax. In this one case, Crawford writes, “…thank you, racism!”

In the online guest book posted following the death of Worcy Crawford in 2010, Rachael Doughty from the Greater Birmingham NOW office notes, “I have fond memories of riding with the Crawford Bus Lines to several marches in Washington D.C. … anti-war marches … the women’s rights marches…the Crawford [& Sons] Bus Lines were truly the ‘Wheels of the Movement’ … and touched many lives.”

So, too, has his only surviving son, who is making sure his father’s legacy lives on. By telling the story of one of many African-Americans who ran the grocery stores and doctors’ offices and other essential businesses during the days of Jim Crow, Donald Crawford, Sr. adds a significant story to our country’s past.

In our interview, Donald Crawford, Sr., said that while the world is far from perfect when it comes to race relations, “Life in the South is better. I live in a mixed neighborhood — something my father could never do — and there are no more signs over water fountains or bus waiting rooms.

“There is still room for improvement, but we’ve come a long way, and I think my father is an important part of the story.”

To read about Jackie Robinson and what he faced in traveling to spring training with the Brooklyn Dodgers, see “Jackie Robinson Barred from Flying to First Spring Training.“