Most people would likely agree that if they were walking on a sidewalk and a Doberman and owner were approaching from the other direction, the wise thing to do would to give dog and owner wide berth.

That’s a stereotypical reaction to the Doberman, a dog known as a formidable guard dog.  But my own instinct was that the breed is probably misunderstood.

One of the benefits of running a website is you get feedback from people, and one of the readers with whom I became acquainted last year was Eve Nelson- Barry, who shares her home with three Dobermans and several cats.  When I asked her what she loved about the Doberman, she wrote: “Their intelligence, their sensitivity, and their sense of humor! And because of their reputation, their sleek, muscular looks are enough to keep the bad guys away.”

My visit to the Hollywood Dog Training School (more about that in my next post) led me to one—and maybe many more.

But let’s back up a bit to better understand Dobermans.

The Background of the Doberman

The Doberman was bred for protection.  Starting in about 1860 Karl Friedrich Louis Dobermann, the tax collector in the town of Apolda in the German state of Thuringia, was looking for a dog to protect him on his travels collecting taxes. Herr Dobermann, who also oversaw the town’s dog pound, began pairing dogs he had available to him to try to develop an animal with keen hearing and eyesight who could be a travel  companion and guard dog.

There are many theories as to the type of dogs Dobermann had available to breed at the pound; the two that were documented were a greyhound and a Manchester terrier, but experts also feel that the German shepherd gene pool from the late 1800s is strongly represented.

Karl Dobermann died in 1894 but two other men, Otto Goeller and Philip Gruening, continued his work, and the first true Doberman litter is usually dated to 1896. (In tribute to Karl, Goeller and Gruening gave the breed the name of Doberman Pinscher—usually simplified to Doberman today.)

Writing about that all-important 1896 litter, Frank Grover, who spent many years judging dog shows and with Peggy Adamson founded the American Doberman Pinscher Education Foundation (1994), writes: “They were not beautiful; in fact they were not even attractive physically. What they had is what we think of as distinctive traits: a keen judgmental mind, strong nervous system, fearlessness and bravery. These eight became famous all over Europe…”

Additional breeding began.  The result was a dog that was very loyal, aggressive when necessary, an exceedingly smart, providing what Karl Dobermann had dreamed of — a perfect guard dog and a perfect companion.

The first Doberman was brought to the United States by Mr. Theo. F. Jager of Rochester, New York, but the world was changing.  As American cities modernized, there was less work for 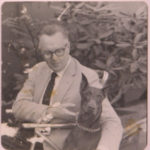 working dogs, and dogs increasingly were expected to live in a city environment or to be kept within fenced yards.

This was difficult for a dog breed like a Doberman that was capable of so much.  Dobermans are intelligent dogs that are very trainable but the owner needed to be in charge. This was a concept that had not yet filtered into American families of the early 1900s.

And the first person to expand the horizon for Dobermans was a pharmacy owner in Detroit, Michigan named Glenn Staines, who received his first Doberman in 1920 after his beloved bull terrier died.  One of the first trainers he hired to work at his kennel (Pontchatrain Kennels) was a young fellow named Willy Necker.

After working with Staines’ dogs, Necker created a dog act using Dobermans, and he toured with them performing at dog shows and fairs. In demonstration of the dogs’ trainability, he used children from the audience (some as young as age four) to demonstrate the obedience of the dogs.

According to an article by CynDee Byer on the American Doberman Pinscher Education Foundation site, the popularity of the Doberman inspired the idea of “group obedience classes,” which, of course, now exist in every town in America.

Willy Necker also took on the obedience guidelines established for training for competition.  The AKC wrote that dogs would be disqualified for anticipation. Necker pointed out that anticipation on the part of the dog shows problem-solving and the anticipation itself was not a sign of disobedience.

Much More than a Guard Dog

Clearly, Dobermans are much more than guard dogs but I wanted to sum up what owners themselves have valued about them over the years.  In an article that appeared in a magazine called Country Life in America (1916), the author James Watson, quotes Theodore Jager about the breed: “…they insist on doing your work, on reading your wishes from your eyes, and if they cannot find such wishes they are apt to turn to something else and make trouble.”

Jager continues:  “Dobermans are too good for [police work].   They do far better as companions and pals. They are excellent watch dogs and are untiring in their efforts to be of service to their master… the Doberman has more brains and relies on his master’s wink and wish more closely than any other dog.”

Frank Grover, one of the two founders of the ADPEF organization backed this finding, writing that one of the truly unique aspects of the Doberman is its insight.   Writes Grover:

“The real magic likes not in the way we communicate to them, but in the way they convey ideas to us.”

And the American Doberman Pinscher Education Foundation, created to provide accurate information on Dobermans, has spent almost thirty years amassing material about the Doberman.  Perhaps this is just the beginning of Doberman stories.  (There is a wonderful story about Dobermans as guide dogs on their website.)

For a list of ten qualities that will make you love Dobermans, visit Boggling Facts and see their list, as well as some gorgeous photographs!

“An Exploration of ‘A Dog with a Human Mind,’” by CinDee Byer,” www.adpref.org, American Doberman Pinscher Education Foundation, 2009.

8 thoughts on “Dobermans: Beyond the Stereotype”