Stickeen wasn’t even naturalist John Muir’s dog, yet he was Muir’s faithful companion as the explorer made a treacherous journey across a glacier in the southeastern section of Alaska.

Who Was John Muir?

John Muir (1838-1914) was to become a an influential conservationist who led many battles for conservation and wrote persuasively about the importance of preserving our natural world.

He was born in Dunbar, Scotland. His family emigrated from there, finding their way to Madison, Wisconsin, when Muir was 11.  Though he always loved being outside, one of his early jobs as an adult was in Indianapolis working on machinery. A bad accident, however, caused him to re-think his life.

When he recovered from his injury, he resolved that he would look for a way to be outside full-time. Leaving Indianapolis, Muir hiked to the Gulf of Mexico and sailed to Cuba. From Panama, he caught a ship going up the West Coast to San Francisco. Eventually he also traveled up the coast into Canada and Alaska.

He particularly loved California. He and his family settled on a ranch in Martinez, California, where he could still easily travel to his beloved Sierra Nevada mountains. In the Sierras, he was intrigued by the land formation and the glaciers. He came to believe that the valleys were created through “glaciation.” His theory was new and controversial, but scientists and explorers were intrigued and came to visit and see what he observed.

In 1880, Muir planned what would be a second trip to Alaska. The southeast part of the state (north of Juneau) had not been well documented. Muir was to explore by canoe with two men–his friend, the Reverend S.H. Young, and an Indian guide. When he and the guide paddled to Fort Wrangell to pick up Reverend Young, a short-legged black dog with silky hair jumped into the canoe behind Young.

Muir immediately requested the dog be left on shore: “This trip is not likely to be good for dogs.”

Young protested that Stickeen—named after a native Indian tribe—was a good-luck totem. Everyone found him to be “filled with wisdom.” (There is also a Stickine River that runs through Canada and into southeastern Alaska.)

Out of respect for Young, Muir dropped the matter. Stickeen was now part of the crew. (We have Stickeen’s story because Muir so enjoyed regaling people of what happened with the dog, that his daughters encouraged him to write it down to share with future generations.) 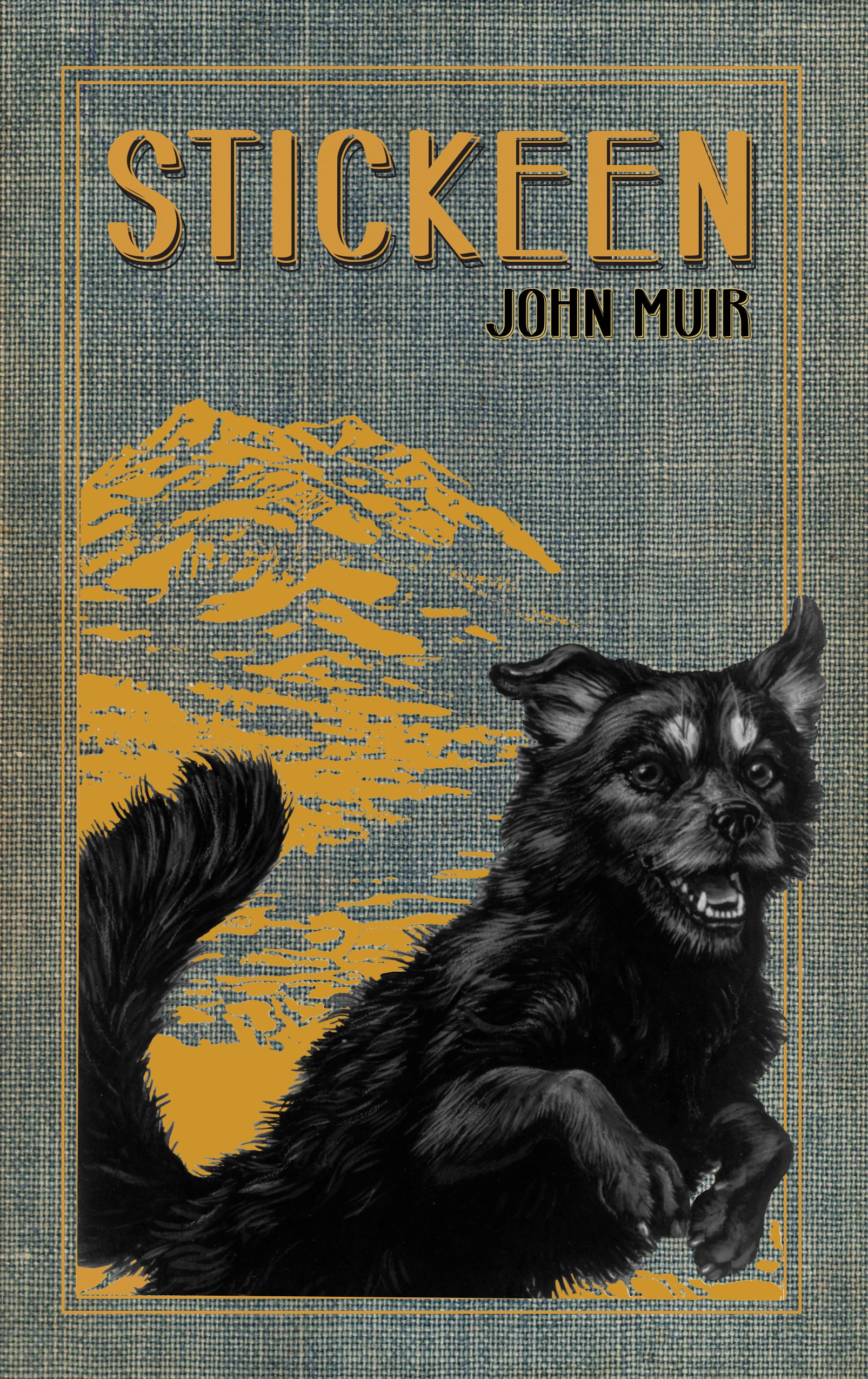 At first, Stickeen kept to himself, writes Muir. “[But] when he heard us talking about making a landing, he immediately roused himself to see what sort of a place we were coming to and made ready to jump overboard and swim ashore as soon as the canoe neared the beach…

“Though capable of great idleness, he never failed to be ready for all sorts of adventures.”

Stickeen was always the first out of the canoe and the last to get into it. When the men were ready to depart, Stickeen could never be found and refused to come to their call.  “We soon found out, however, that though we could not see him at such times, he saw us. From the cover of the briers and huckleberry bushes in the fringe of the woods was watching the canoe with wary eye.

“As soon as we were off, he came trotting down the beach, plunged into the surf, and swam after us, knowing well that we would cease rowing and take him in,” writes Muir.

The goal of the trip was to further explore Glacier Bay. When they reached an inlet known as Taylor Bay at about 5 p.m., they guided the canoe to the shore and made camp.

The next morning Muir awoke before the others. The day was cold and windy, and he sensed a coming storm but this only heightened the thrill he felt for the area. He hoped to go off on his own, leaving the men and Stickeen behind. But Stickeen rose, too, and would not be dissuaded from coming.

The wind was strong. Muir and Stickeen pushed forward across the lower part of the glacier. When it began to rain, they took cover in a grove on the east side of the glacier. Muir pulled out his notebook and noted in words and in sketches the topography.

When the weather improved, they continued up the glacier. Muir described it as a “prairie of ice.”

The rain continued, but Muir did not grow concerned until he smelled the coming of snow. He picked up his pace, wanting to return to camp before dark.

As he and Stickeen traversed the glacier, they encountered numerous crevasses. Muir looked for the narrowest point of each opening, and then he made a big jump to get across, followed by Stickeen. When it was particularly dangerous, Muir cut hollows for his feet to avoid the risk of slipping as he jumped. This helped Stickeen as well.

As the temperature dropped and snow began to fall, Muir’s concern deepened. He knew they could weather one night on the glacier, but they had skipped breakfast. He wanted to return if possible.

As they continued, Muir encountered an extremely wide crevasse with steep sides. As he always did, Muir went in search of a better spot to cross. He hiked about a mile north and found nothing.

Muir—like all experienced mountaineers–preferred to re-trace his steps rather than forge into the unknown at times of bad weather or nightfall. But Muir made an educated judgment. They were midway across the glacier, and it was too late to go back.

As he evaluated the crevasse before them, Muir estimated that it was 50 feet wide. Further complicating the situation was the fact that on both sides of the crevasse there was a sheer drop.  But as Muir looked, he saw that about ten feet down there seemed to be a thin bridge connecting the two sides.

“The ice bridge dipped in the middle like a jump rope held between two giants,” is the apt description from author Donnell Rubay, who wrote a picture book about Muir and Stickeen.

If Muir and Stickeen could find a way down the ten-foot drop, then they could probably make it across the rope-like ice. It seemed their best hope.

First, Muir chopped footholds down the face of the crevasse and climbed down to the bridge. Once there, he straddled the “rope”—one leg on each side—and began scooting across. He knew this method of travel would be impossible for Stickeen, so he chopped to make a flat surface along the top as he went. This might provide Stickeen with a tight-rope style path on which to walk. 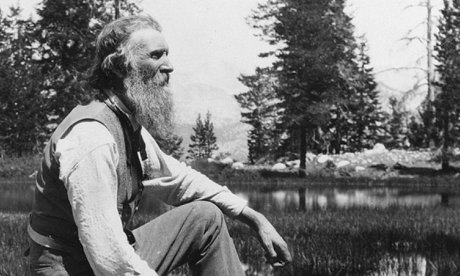 Once Muir was across, he chopped footholds up to the other side. Then he turned to encourage Stickeen to begin his crossing.

Stickeen had been absolutely fearless up until this time, but was he now beside himself, crying: “After taking another piercing look at the tremendous gulf, [he] ran away [moaning and wailing] in desperate excitement, seeking some other crossing.”

Could this be the silent, philosophic Stickeen?

Muir encouraged and called. He was perplexed as to what to do, and he resolved that he might have to leave Stickeen and come back and fetch him the next day.  Muir told Stickeen as much and then the man then started off as if to abandon him. Stickeen still moaned and looked  down.

Finally, Muir gave it one more try. Speaking severely, he shouted to the dog that he would be left if he did not come.

Stickeen understood the tone. “With the courage of despair, hushed and breathless, he crouched on the brink of the crevasse in the hollow Muir had made for his knees. He then pressed his body against the ice as if trying to get the advantage of the friction of every hair, gazing [straight down] at the first step. He put his two front feet together and slid them down to the first notch, followed by the back feet, perching with all four feet in each notch before sliding down to the next step.

When Stickeen made it down to the level where the bridge began, he seemed to do a one-two-three against the wind, and then he walked carefully across the rope-like span. Muir barely breathed during Stickeen’s passage. When Stickeen reached the other side, Muir murmured, “well done, well done little boy,” and reached down to pull the dog up.

But Stickeen did not wait. As Muir reached for him, the dog launched himself out of one of the footholds and seemingly flew right over the explorer’s head. Muir writes about the scene that followed:

“Never before or since have I seen anything like so passionate a revulsion from the depths of despair to exultant, triumphant, uncontrollable joy,” writes Muir. “He flashed and darted higher and higher as if fairly demented, screaming and shouting, swirling round and round like a leaf in a whirlwind.”

With that, Muir pointed them both toward where he expected the camp site to be. Stickeen “flew across everything in his way,” and did not settle down until darkness fell.

About ten o’clock, they walked into camp, very hungry and tired. Young and the guide maintained the fire and had a big supper waiting for them.

For the rest of the trip, Stickeen was constantly at Muir’s side. “Whenever he caught my eye, he seemed to be trying to say, ‘wasn’t that an awful time we had together on the glacier?’”

After the trip, Muir dropped Reverend Young and Stickeen off at Fort Wrangell. Muir returned to California, but he frequently asked after Stickeen.

Then in the summer of 1883, Young wrote sad news:  A tourist reportedly picked up Stickeen and took him with him.

John Muir went on to attract the attention of President Teddy Roosevelt regarding the importance of conservation and to create the Sierra Club. But he never forgot Stickeen:

“Doubtless Stickeen has left this world—crossed the last crevasse—and gone to another. But he will not be forgotten. To me, Stickeen is immortal.”