The baseball catcher’s mask is a fundamental piece of equipment in the game. The catcher is  positioned behind home plate and is needed there, but it is a dangerous position to play.

From the catcher’s vantage point, he can see the whole field. This lets him observe and respond to the ongoing game in a way that no other player can. But it also puts him in the direct line of fire during batting. He may be hit by an errant pitch or a flying bat or pieces of a splintered one. Injuries from any of these causes can be serious. Catchers have been known to be knocked unconscious during play. Protective gear is essential.

How the Baseball Mask Came About

According to information from the Baseball Hall of Fame, the early catchers wore only a rubber mouth guard—there was no mask, no chest guard, no shin guards, and most surprisingly, no glove.

Because they wore no protection, they stood a few feet back from the plate and caught pitches on the bounce.  With this type of play, there was also no need for catchers to crouch.

The development of the curveball in the late 1860s or 1870s brought about the need for the catcher’s mask. Catchers needed to come in closer to the plate in order to be there for the catch. This put the player in a position where he could be hit by either a ball or the bat.

Fred Thayer Comes Up with Concept

A Harvard student named Fred Thayer is credited with having invented the first catcher’s mask. Thayer was team captain of the Harvard Nine. He also played third base.

The pitcher for Harvard’s team was working on perfecting the curveball. It wasn’t an easy pitch to master, and there was controversy over the use of it. Slowly, teams, including Harvard and other college teams, were adding it.

Thayer’s concern centered on a new catcher who joined the team. James Tyng had just qualified for the team and would play catcher. Thayer wanted to keep Tyng and other players safe.  What would protect Tyng from being injured with the new style of play?

As he walked across the campus to classes and to team practices, he noticed the face masks being carried by members of the fencing team. He wondered if that model could be used for a catcher’s mask.

Catchers need to see everything on the field, so the density of the webbing on the fencer’s mask would need to be modified.  A mask strong enough to protect against a ball and yet open enough to permit good vision were the elements Thayer had in mind when he visited a tinsmith in Cambridge. 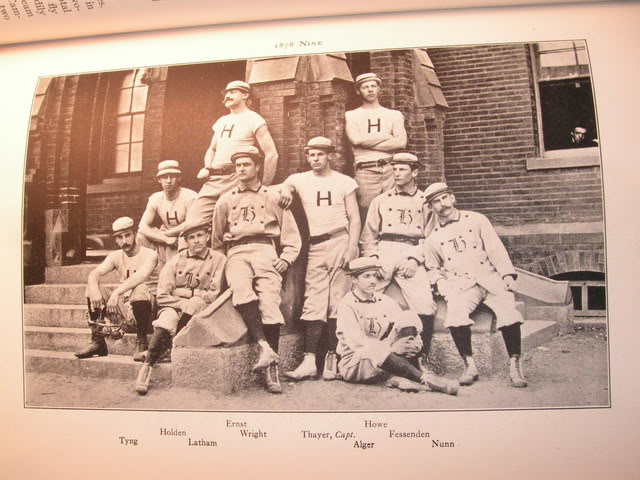 The two were able to work together and modify the creation to Thayer’s satisfaction.

Thayer’s mask was first worn by James Tyng in a game in Lynn, Massachusetts (1877). There was some grousing from the opposing team that the mask gave the Harvard Nine an unfair advantage, but overall, the use of the mask gained approval.

The H Book of Harvard Athletics quotes an editorial from the Harvard newspaper, The Crimson:

“The new mask was proved a complete success, since it entirely protects the face and head and adds greatly to the confidence of the catcher, who need not feel he is in every moment in danger of a lifelong injury. To the ingenious inventor of this mask we are largely indebted for the excellent playing of our new catcher, who promises to excel the fine playing of those who have previously held this position…”

The Patent on the Catcher’s Mask

Fred Thayer applied for a patent for his “Face-Guard or Safety-Mask for Base-Ball Players” on January 15, 1878. The patent was approved less than a month later. 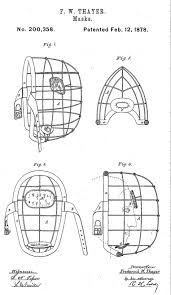 His application describes the mask this way:

“It consists of a forehead and a chin rest or bottom bearing, and a wire cage to receive them and extend about the face, the whole being substantially as represented [in the illustrations provided with the patent application], and provided with straps or means of securing the cage to the head of a player.”

The application also specified that the cage was “arched both horizontally and vertically, in order to deflect a ball when struck by it.”

The value of the mask for professional teams was understood relatively quickly despite a cultural environment that honored “manliness:”  If a player suffered an injury (including a serious one), the honorable thing to do was to get up and resume your position. In the press, there are mentions of catchers who blacked out briefly from a hit, but the reporters wrote of the player’s heroic action in getting up and continuing to play.

Initially, catcher’s were taunted by the crowds when htey wore masks for the first time.  But because of the very real risks of the position, catchers soon started wearing the new gear.

By the late 1880s, there are enough modifications on record in the patent office that the masks must have come into wide use by that time.

Improvements to the Masks

One of the early patents on file that amends the invention was one by George Barnard (1888) who realized that the catcher’s neck was still exposed. (A powerful ball to the neck can be painful and sometimes fatal.) He added another bar beneath the main part of the mask in order to provide more neck protection.

His mask is also described as the “open view” mask as he saw that one of the horizontal bars across the eyes could be removed to provide greater visibility.

James Tyng, and those who followed, were able to move closer to the plate. Soon catchers began to crouch, enabling them to form a target with their hands in the strike zone.

Over time, it became clear that other protective measures needed to be implemented. Today the catcher wears shin guards, a chest protector, and a glove. The all-important catcher’s mask is sometimes an all-in-one piece combining the mask with a shell-type helmet. This provides the catcher with the protective head gear needed.

You might also enjoy reading about Baseball’s Ceremonial Pitch.

4 thoughts on “Baseball Catcher’s Mask: How It Was Invented”