Cracker Jack holds the spot as “most famous of baseball snacks.” Remarkably, it has held that honor for over 100 years.

The snack itself began as a simple, inexpensive confection sold by street vendors in Chicago.  The story of the product, however, starts a little before that.

The Inventor of Cracker Jack

The creator of the treat, Frederick William Rueckheim (1846-1934), emigrated from Germany in 1869. He was 23 when he arrived in the U.S., and he moved to the Midwest to work on an uncle’s farm. For a couple of years, Rueckheim worked there and saved money, but farm life was not for him.  The farm was near Chicago, so when much of the city was wiped out by fire in 1871, volunteers were sought to help with the clean up. Rueckheim saw this as his opportunity.

As he worked with the men who were re-building the city, he met a fellow who soon became his partner in a candy business. In that day, few vendors had shops. They simply sold from a cart on a street corner.

Rueckheim and his partner named their company Reliable Confections, and their first product was a sweetened popcorn.  Rueckheim staked out a corner on Fourth Avenue and did well. His partner lost interest, however. Frederick bought his share of the business and wrote to his brother Louis (1849-1927) to come to America to join him. Within a few years, the brothers had a three-story plant on South Clinton Street and were adding to their product line.

While some sources say “Cracker Jack” was introduced at the Columbian Exposition, this is only partially true. The Rueckheimers obtained a booth from which to sell, but their product did not do well.

The mixture they settled on was then called “Candied Popcorn and Peanuts” (popcorn and peanuts mixed with molasses). It tasted good but was a sticky mess to eat.

Sales at the Exposition were disappointing, but they learned from the experience. Louis went back to the factory kitchen and experimented. By 1896, he came up with a way to make the molasses less sticky. (This process is still a trademarked secret.)  With that, the brothers began offering it to people to taste.

According to The Chicago Daily Tribune, a foreman at the company was the one who came up with the name. Upon being offered the treat to taste, he responded with: “Why that’s cracker jack!”  (Cracker jack was a slang term from the day that meant “first rate.”)

The Rueckheims loved the name and trademarked it.

By the first decade of the 20th century, their company made 750 different confectionery products ranging from Angelus Marshmallows to the Hunky Dory bar, but Cracker Jack was the mainstay. Popcorn was relatively inexpensive to purchase, and the fact that Cracker Jack didn’t melt made it popular with vendors and customers alike.

Like other types of popcorn that was sold in that day, the street vendors carried paper tubs scooped the sweet mixture into a tub when a customer paid for it. This was fine for street sales, but it limited growth. The product could not be shipped in tubs, and if left open for long, the popcorn became stale.

Henry Gottlieb Eckstein, one of the men they worked with, had an idea. In 1899 he presented to the Rueckheims a waxed sealed box for use with Cracker Jack. The box could easily be packed for shipping. The waxed box meant that the snack stayed fresh longer. The Rueckheims acknowledged the step forward this gave their product, and in 1902, the company was reorganized as Rueckheim Bros. & Eckstein.

At about this time, they acquired the tagline that is still used: “The More You Eat, The More You Want.”

As they developed the look of the box, cartoon bears became the products mascots. The bears were always having fun —fishing, playing baseball, or even climbing the Statue of Liberty. It was all to convey that Cracker Jacks and fun went together. 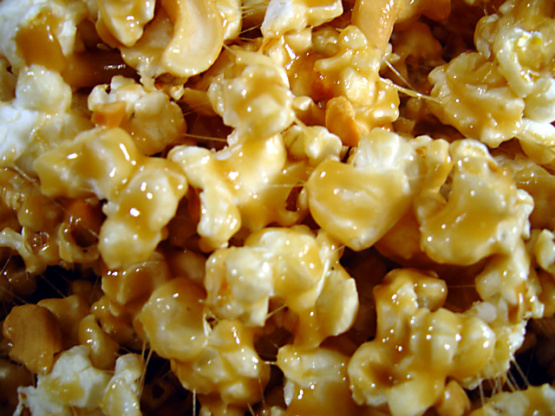 Some of the best marketing ideas are ones that can’t be planned, and this was certainly the case with Cracker Jack. In 1908, an entertainer named Jack Norworth was riding on the New York subway when some fun lyrics came to him, and he scribbled them down. He later sang the words for his friend, Albert von Tilzer who wrote the music. Their song was perfect  for the time:

So it’s root, root, root, for the home team
If they don’t win, it’s a shame
It’s one, two, three strikes you’re out
At the old ballgame

The Ruekheim brothers and Eckstein could not have had a better stroke of luck. The song became popular then, and it is still sung at baseball games today.  In recent years, one stadium actually tried to save money by switching to a cheaper vendor selling a knock-off of Cracker Jack. But the song has so deeply embedded the snack into the game that the fans protested. After only a game or two, the familiar Cracker Jack box returned to its rightful place at baseball concession stands.

Cracker Jack: A Prize in Every Box

In 1910 the company began experimenting with putting coupons in each box of the product. The coupons could be redeemed for prizes such as watches, silverware, sewing machines, and other expensive consumer goods.  But only a couple of years later, the Rueckheims made a change. This was a snack loved by kids, so the attraction inside should be for young people. In 1912, the company began inserting small trinkets into the boxes.

This “prize in every box” marketing strategy proved successful. The early prizes ranged from miniature books and dolls to decoder rings, magnifying glasses and tiny trains. Many are valuable collectibles today.

In 1914 and 1915, the company took a lead from other companies and put baseball cards in boxes instead of the toys. They produced two separate issues of cards featuring classic baseball players. While these are highly collectible today, the company returned to their signature trinkets in 1916.

Today’s prizes are different–temporary tattoos or a printed insert with jokes or riddles. (Regulations on toy sizes acceptable for children are certainly part of the reason for the change.)

But as the national mood changed so did the business culture.  As a group, German immigrants in the U.S. were viewed as innovative, intelligent and loyal to America. But as the situation between Europe and Germany escalated, Americans began to take a closer look at German families who arrived in the U.S. 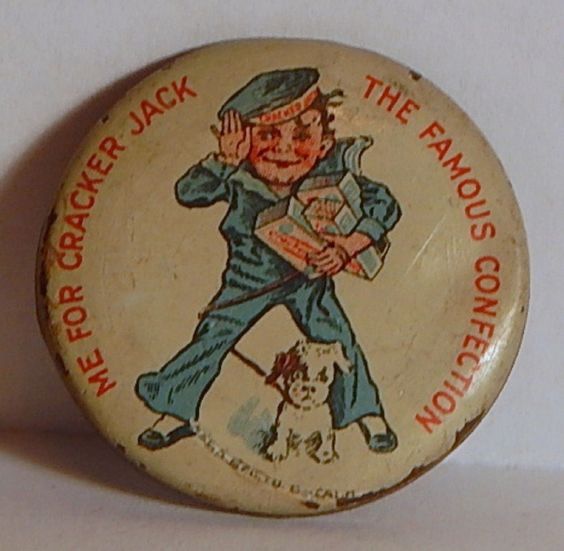 The Rueckheims, at first, were unconcerned. Frederick became a naturalized U.S. citizen in 1881. Now, 35 years later, he felt very much an American. Before emigrating, he served in the Prussian Army, and he still visited his home country every few years, but in his mind, he was an American.

In 1915, a German submarine sank the Lusitania, a passenger ship with many Americans on board. By 1917, the U.S. was entering the war. The Secret Service was on watch for any anti-American activities at home, and they began visiting businesses that were owned by German immigrants.

When they visited Frederick Rueckheim’s office, the Secret Service was alarmed about two things. They had been informed that Frederick had turned down the American Red Cross when they approached him for a donation. This coupled with the fact that Frederick kept a photo of Paul von Hindenburg, a German Field Marshal, on his desk caused concern.

The local paper got wind of the story, and a reporter called Rueckheim to see what he had to say. Rueckheim explained the Red Cross turn-down by explaining that his company had a policy against opening the workplace to solicitors; he turned down the Red Cross only for that reason. 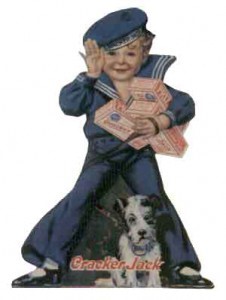 The photograph was quickly put away. (Both Frederick and Von Paul Von Hindenburg served in the Prussian Army in the 1860s. Perhaps they served together, though that was never fully explained.)

And on May 8, 1917, Rueckheim released a statement avowing his loyalty to the United States. He made a donation to the American Red Cross, and arranged times when military recruiting officers could come in to talk to employees.

As the country continued to respond negatively to anything German (changing street and town names, etc.), Rueckheim decided that Cracker Jack packaging could offer an opportunity to more closely align with his adopted country.

Discussions with his art department resulted in a removal of the fun-loving cartoon bears, soon to be replaced by a patriotic sailor. Sailor Jack is depicted as a young boy, and his face was modeled after Frederick’s grandson, Robert, who was a cute 4-year-old at the time.  To keep him from being alone on the box, he was given a dog, Bingo, who was a mutt copied after one belonging to Henry Eckstein. 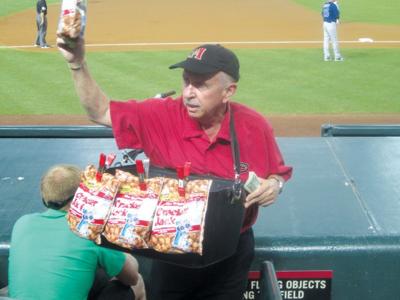 The first packaging featuring “Sailor Jack and Bingo” appeared in 1918. The following year it became part of the registered trademark.  To continue to support American war effort, Rueckheim arranged for the printing of a pocket edition of a songbook that included Uncle Sam’s Famous National Songs. Sailor Jack was on the cover. (In 1920, grandson Robert died of meningitis. His tombstone bears a carving of Sailor Jack.) 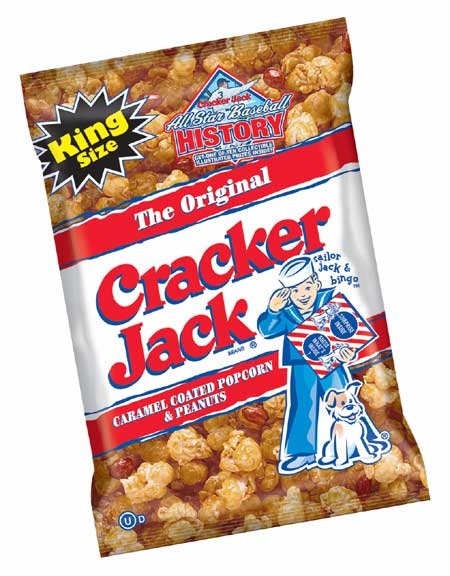 In 1922 the company name was changed to the Cracker Jack Company.

Cracker Jack continued as a family-owned and managed business until 1964 when they received a good offer from Borden Foods, Inc., in 1964.

Then in 1997, the Frito Lay division of Pepsico purchased the company.

To read about another 19th century candy that we still enjoy today, read about Jelly Beans.