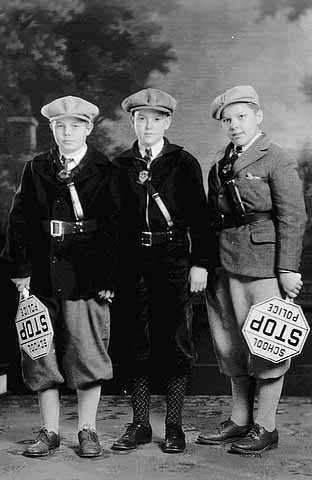 The school safety patrol system using older elementary school children to help younger children navigate the streets was created much earlier than one would expect. The program dates to 1920, a time when there were relatively few cars on the roads.

The children were taught to role model safety on the streets and share safe practices with younger children. From the beginning, safety patrols learned to direct children as to when it was safe to cross the streets; they were never to try to direct traffic.

Today some communities still have a Junior Safety Patrol program, but school districts have generally turned to hiring adult guards who can have authority over the children as well as the traffic.

There were relatively few cars on the road during the third decade of the twentieth century, but because there were no systematic rules for traffic it created chaos on the streets.

People learned to drive through trial-and-error, and states did not yet require driver’s licenses. (By 1935, only 39 states required drivers to have licenses, and most did not require testing to qualify for a license.)

There were also few ways to control traffic. Some communities erected “stop” signs, but the first traffic signal was not even invented until 1915. Most communities did not see the need for the electronic devices initially, so the signals appeared slowly, mainly in major population centers.

Pedestrians were also part of the problem. People on foot were accustomed to crossing wherever it was convenient. Children were particularly prone to this, darting into traffic without thinking of the consequences.

More than one location claims to have been first with a safety patrol program, but St. Paul, Minnesota’s program gains credibility because there is full documentation of the process they went through to create the program. 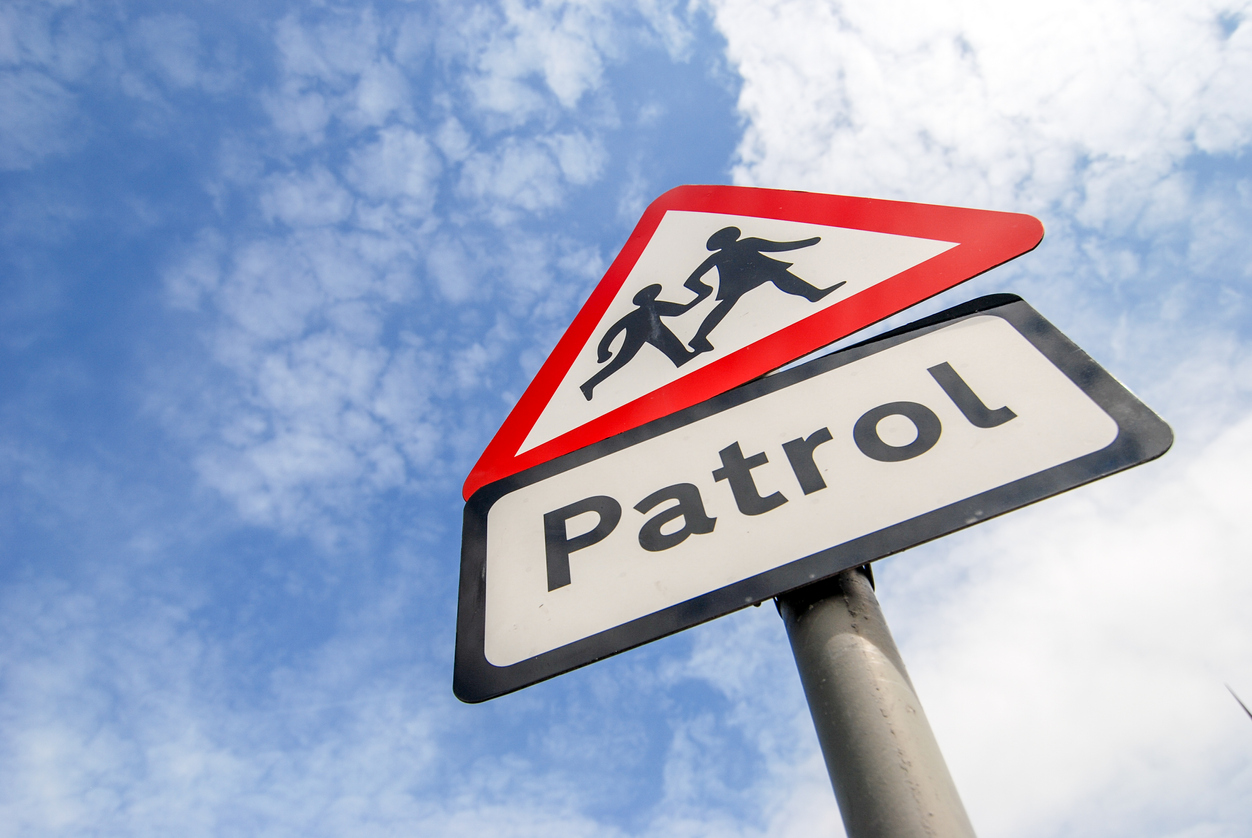 To begin, the city council assigned a full-time staff person to oversee it. Frank Hetznecker was appointed to serve as head of the St. Paul School Police. He spent several months working with school principals to create what the program should be. He also worked with students in refining the way they could be trained to safely help others while also protecting themselves.

Street crossings were to occur at specific street corners where patrols were stationed. The patrol then checked for cars and waited for them to pass before starting the younger children across the street.

While both public schools and parochial schools use school safety patrols, one of Hetznecker’s biggest advocates was Sister Carmela Hanggi, principal of the Cathedral School in St. Paul. She was an early proponent of the program and was very helpful in providing suggestions and input.  As a result, Hetznecker set up the first monitored crossing (February of 1921) at the biggest intersection near the Cathedral School.

That first year, the St. Paul school police signed up 750 students to participate. The program was deemed a success and was adopted city wide.

St. Paul made a big commitment to the program, assigning Hetznecker to it full time. He invested a lot in his work and arranged for picnics and parades for the patrol boys (and eventually girls) who served. 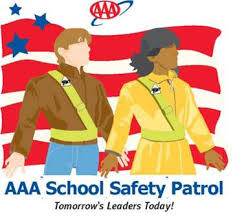 By the 1930s, the American Automobile Association took over sponsorship of the program and created a unified program that could be used throughout the country. They also sponsored rallies and parades to build enthusiasm for the program. For many years, an annual parade was held in the nation’s capital.

As the program standardized, a pledge was added:

“I pledge to report for duty on time, perform my duties faithfully, strive to prevent accidents, always setting a good example myself, obey my teachers and officers of the patrol, report dangerous student practices, strive to earn the respect of followers.”

Initially, only boys could become safety patrols, but this changed over time. Starting in the late 1940s, girls seem to have been added on a community-by-community basis. In Davenport, Iowa, a school principal is quoted in the local paper The Daily Times (May 20, 1952): “We have found that the girls seem to take more interest in their duties,” said Sister Edigna, principal of the St. Joseph School. “They remain at their post and they don’t play while on duty.”

The Sister said that the girls have only one complaint: “When meetings are held for the school patrols, the boys dominate the sessions.” 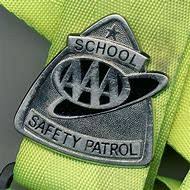 If you ever served as safety patrol, then you well remember the patrol belt. Initially they were off-white, and the straps were made of webbing. The belt section went around the waist, and there was a shoulder strap that went over the right shoulder. A silver Junior Safety Patrol badge was worn on the shoulder strap.

The belts were named for British General Sir Samuel Browne (1824-1901) who lost his left arm in battle. This disability made it difficult for him to draw his sword, because in the late 19th century, a soldier would use one hand (usually the left) to steady the scabbard while the right hand withdrew the sword.

With only one arm, Browne couldn’t do this, but he wanted to remain in the military.  After testing different systems, he added a belt that crossed over his shoulder to anchor the scabbard so it was steady enough that he could remove the sword with only one hand. This gave him an additional idea. He had D-rings added for a holster for his pistol and a small leather case for binoculars. They were attached in such a way that he could remove either using only his right hand.

Soldiers saw the merit of Browne’s system, and they began copying it. 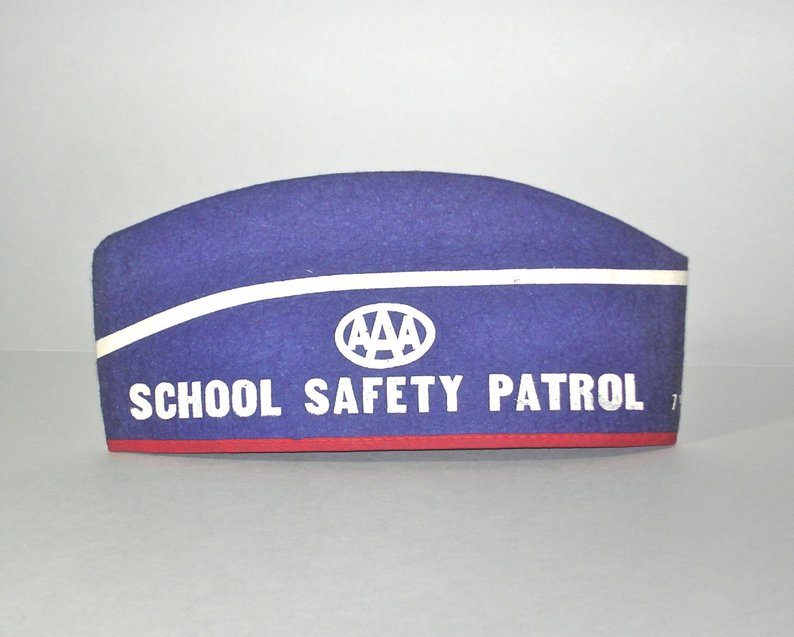 From early on, the Junior Safety Patrol program issued the belts to students for the duration of their assignment. Student patrols took great pride in having the belts. Part of their duty was keeping the belt clean and the badge polished. Some patrol groups also used garrison caps for the patrols. These, however, were difficult to keep on one’s head, and students were required to wear them folded over their belt when not being worn. 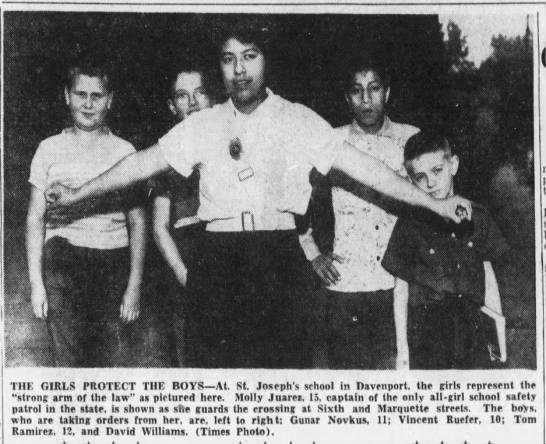 At the end of the assignment, all patrol items were turned in and passed on to the new group of volunteers.

Today the belts are in the same design but they differ in color. Most are made of lime green straps that are reflective. (Some districts still use a reflective orange.) Districts that issue hats now hand out baseball caps. Some cities where the weather is often inclement make certain that the students are issued reflective waterproof ponchos.

Despite these changes, one aspect of the program remains the same: Students do not direct traffic, they help other students understand when it is safe to enter roadways.

Today there are 654,000 children serving as safety patrols in 34,500 schools throughout the United States, according to a AAA spokesperson.

To read about how car seat belts eventually came about, read The Crusaders who Campaigned for Car Safety.

For more stories about schools in the past, read Remember Duck & Cover?

Or Dick and Jane: The Story of These Early Readers.