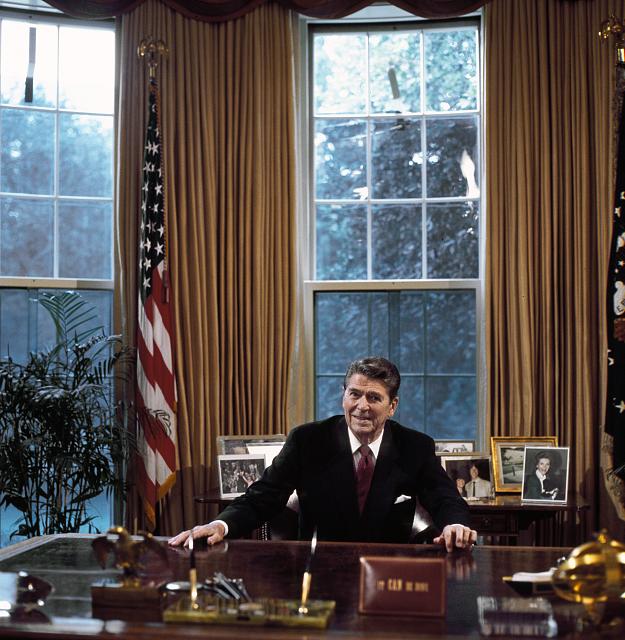 Ronald Reagan may have had a sweet tooth, but the true reason he began eating jelly beans was because he quit smoking.  Reagan, a former actor, was well-known for Chesterfield cigarette ads from the 1940s and ‘50s, but it was pipe-smoking that had him hooked.

When he began his campaign for governor of California in 1966, Reagan knew he needed to give up his pipe. Candy of some type was a logical substitute, and he liked jelly beans. He wisely chose to buy from a California company, the Herman Goelitz Candy Company.

In 1965, the Oakland-based company came out with a new mini-jelly bean. The beans were novel for their small size, but they tasted special, too. Goelitz created a way to infuse the entire bean with flavor. (Regular jelly beans contain a sweet jelly-like center; only the shell is flavored.)

Both Reagan and the Goelitz company celebrated when Reagan won the governorship. He took office in 1967, and his staff placed a standing order for monthly deliveries of jelly beans to government offices in Sacramento. 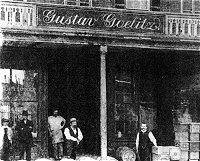 A little over a decade later, the Herman Goelitz Candy Company introduced a new product: “Gourmet jelly beans,” also in the mini-size. In 1976, they picked up on an idea from one of the candy delivery men who suggested they produce their mini-jelly beans in attention-getting flavors. The first gourmet beans introduced were Very Cherry, Root Beer, Cream Soda, Tangerine, Green Apple, Lemon, Licorice, and Grape.

Because Reagan was a long-time customer who was also well-known, the company slipped complimentary packages of the new jelly beans—called Jelly Bellys–into the governor’s regular shipments.

Reagan became a fan. He soon switched his order to consist totally of Jelly Bellys. Licorice was his favorite flavor.

After serving as governor of California from 1967-1975, Reagan entertained the idea of running for president. By 1978, he began campaigning in earnest. Because he continued to eat jelly beans, the candy company’s fortunes improved as Reagan made political progress.

In 1980, a photographer from TIME magazine was covering Reagan’s campaign. He happened to take a photograph that clearly revealed the brand of jelly bean Reagan was eating.

“The type most esteemed by the President is brand-named Jelly Belly, which—addicts vow—is to the ordinary jelly bean what foie gras is to liverwurst. About one-fourth the size of the Easter-basket staple and three times as expensive (up to $4 per lb.), Bellys come in an array of 36 flavors. Their manufacturer, Herman Goelitz Co. of Oakland, maintains that the flavors are so delicate that the beans should be eaten one at a time, not by the vulgar handful. How else to appreciate the richness of the coffee mocha, the tang of the piña colada, the bouquet of the strawberry daiquiri?”

Between the photo and the eventual article mention, telephone calls to the candy company heated up. Many were press calls, but even more calls were orders. The company, which was still relatively small, fell several weeks behind in orders.

At the time, Chairman Herman Rowland said that Reagan’s love for the candy “made us a worldwide company overnight.” The business went from sales of $8 million per year to double that number the following year. 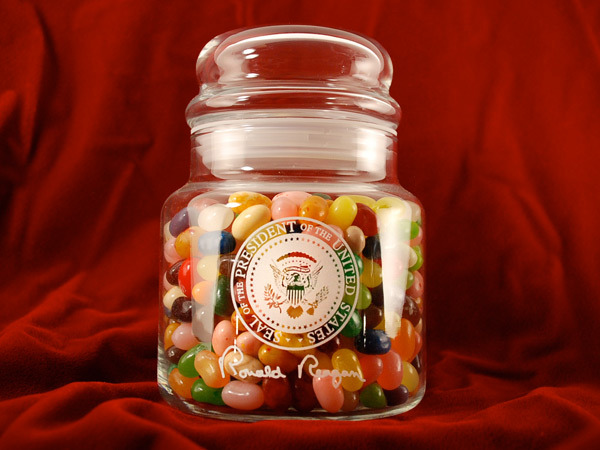 As the national press began to cover all aspects of Nancy and Ronald Reagan’s lives, many stories focused on the president-elect’s love of jelly beans. Of course, the inauguration committee saw that red, white, and blue jelly beans would be needed for the January celebration.

The Herman Goelitz Candy Company was more than happy to accommodate the committee, but they had work to do. They had red beans (Very Cherry) and white (Coconut), but as of 1980, they had not yet manufactured a blue bean. After a little mixing and tinkering, they were able to introduce “Blueberry.” Even now it is one of the company’s most popular flavors.

In January 1981—just in time for the inaugural festivities–Goelitz Company shipped three and a half tons of red, white, and blue jelly beans to Washington, D.C.

After the inauguration, the Reagan White House placed a standing order for 720 bags of beans per month. Jelly beans became a staple offering anywhere the president was–in the Oval Office, at cabinet meetings, and on Air Force One. Some were also distributed throughout government buildings. 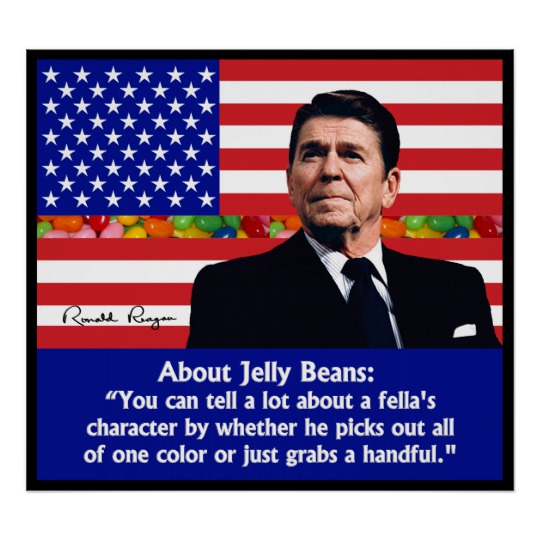 The Goelitz Company obtained permission to create an official candy jar with the presidential seal. They also came up with a candy container made specially for Air Force One. It was designed so that the jelly beans would not pop out or spill if there was turbulence.

A jar of the beans also became the perfect gift for visiting dignitaries.

Reagan enjoyed these candies so much that he later sent a letter to the CEO: “We can hardly start a meeting or make a decision without passing around the jar of jelly beans.” 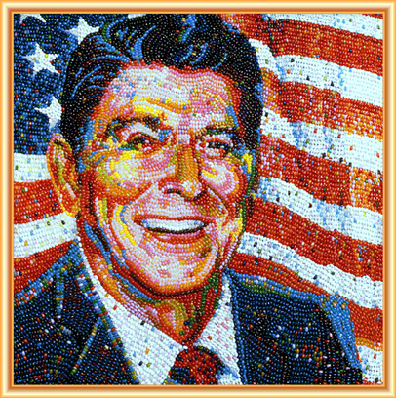 The popularity of the president and the association with Jelly Bellys led many members of the public to craft portraits of Reagan or of both the President and First Lady/ The artwork was often sent to the candy company. (The White House almost certainly received art, too.) Many of the portraits were displayed at Jelly Belly headquarters and in their factories.

Mourning the Loss of President Reagan 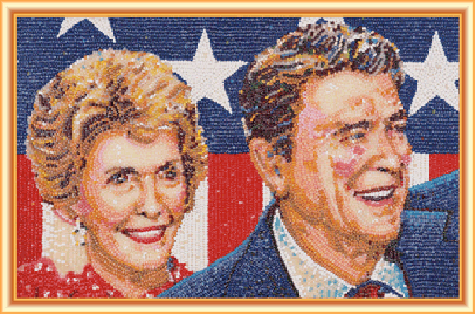 When Ronald Reagan died on June 5, 2004, the Jelly Belly Company marked the occasion by placing black ribbons over the many Reagan jelly bean portraits.

Individuals, too, found a fitting way to mark the death of Jelly Bellys’ greatest fan. Many who visited the Reagan library or his gravesite left small offerings of Jelly Bellys behind.

To read more about the story behind jelly beans, click here.

And to read about the pets of the Reagan White House, click on Dogs of Ronald Reagan.