The Triple Nickles, as the 555th Parachute Infantry Battalion was 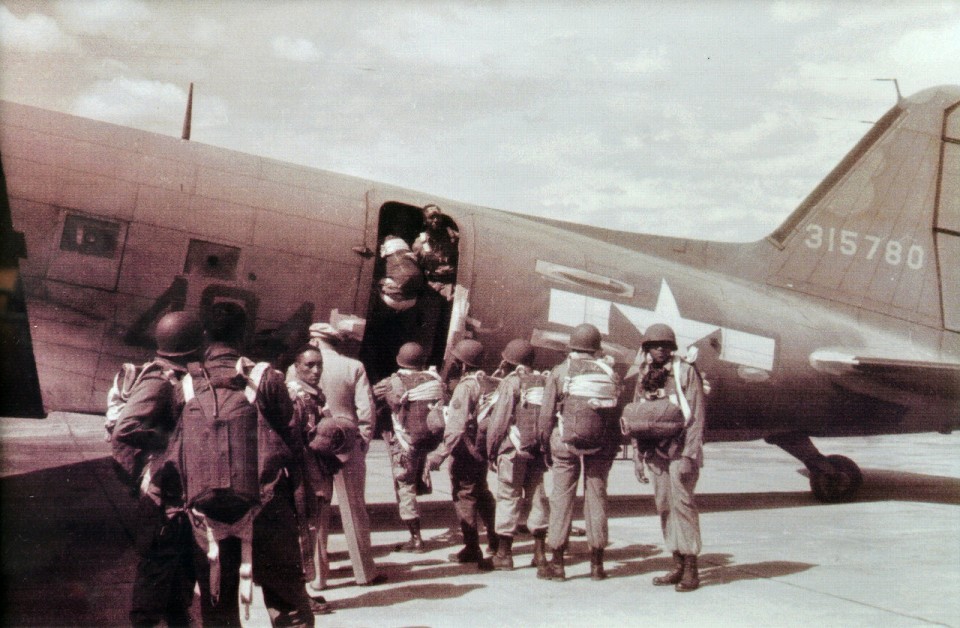 known, were a remarkable, highly-disciplined company of African American paratroopers who paved the way for integration in the military. They also overcame military skepticism by proving that African Americans could excel at jobs that required intricate training.

How The Triple Nickles Got Started 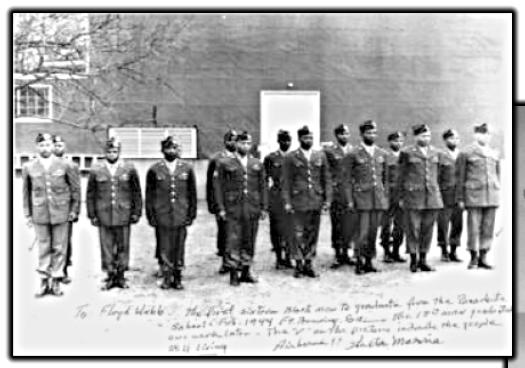 At the beginning of World War II, African Americans were taken into the military at a rapid rate, but they were not given combat positions. They were the support personnel. They could cook, clean, manage the laundry, or become carpenters, road builders, guards, or clerks. If a black man became an officer, he could only be in charge of other African Americans in the military.

Housing, meals, and recreation were also separate. If they were allowed to attend movies on base, there was a separate entrance and seating area for them.

This was not the Army they had hoped for.

Some of the men worked as support staff at Fort Benning, Georgia, where the Army’s new parachute school was based.  Watching the white men train to be paratroopers was exciting but disheartening. Why couldn’t the black troops qualify for jobs like that?

Walter Morris was a first sergeant at Fort Benning. His official job was as a clerk. As he performed his job, he noted that his fellow soldiers were depressed. For many, their old jobs at home were better than what they were doing at Fort Benning.

Walter Morris began to consider the possibilities. If the white soldiers finished their training at 4 p.m. and the support staff got all their work done, what would keep him from gathering a group of men to go through the type of training the white soldiers were enduring?

To be a paratrooper requires important qualifications and skills as 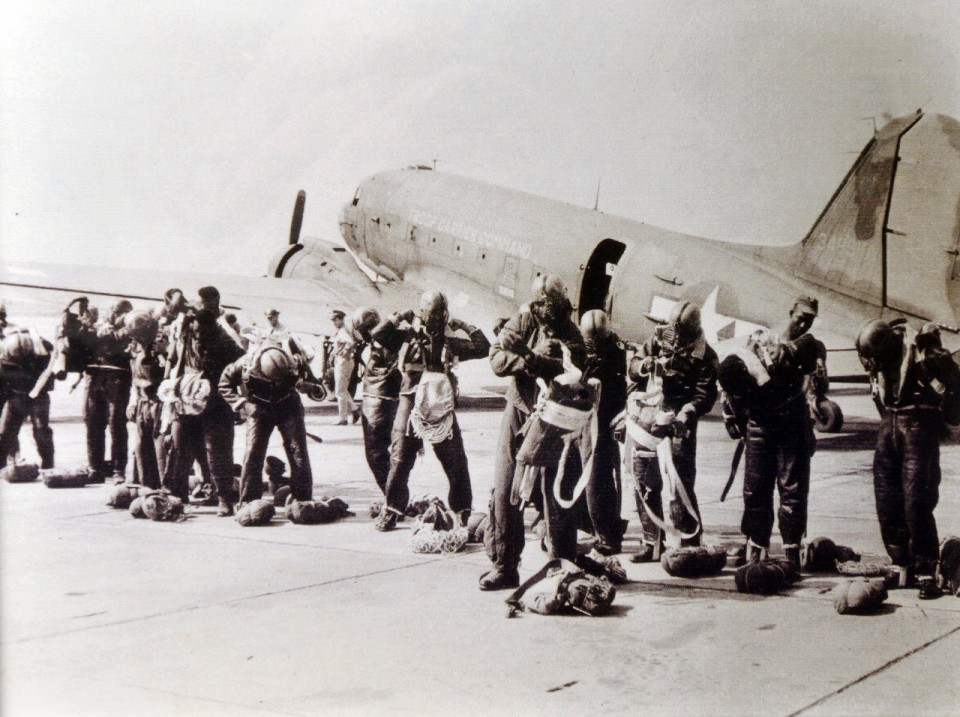 Tanya Lee Stone points out in her book about the Triple Nickles, Courage Has No Color. The men needed specialized training along with a very high level of physical fitness. To jump out of airplanes into the unknown, they also needed  a lot of courage.

Morris gathered the men and began guiding them through the same rigorous calisthenics he had observed being performed by the white soldiers. Some of the equipment was not accessible without specialized trainers, but for jumping preparation, there was a 5-foot tower the men could use.  This exercise provided the feeling of jumping off something high, and it also let them practice learning to land with their weight well-distributed. Evenly distributed weight is key to reducing injuries. 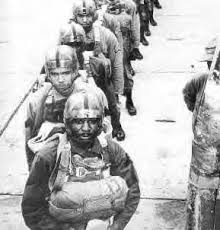 As Morris continued his after-hours program, the men became more fit. With that came added pride for what they were accomplishing.

One evening the base’s commanding general drove by and saw the men training. The next day Morris was summoned to headquarters. Morris was afraid he was in trouble, but the general congratulated him and shared with him the fact that plans were in the works to create a test platoon of African American paratroopers. Walter Morris was asked to be their first sergeant.

On February 18, 1944, sixteen soldiers became America’s first black paratroopers. They became known as the “Triple Nickles” as a shorthand for their official title, the 555th Parachute Infantry Company. The spelling of “nickle” derives from the old English, but it may also have been a spelling error that stuck.

Despite qualifying as paratroopers, they still lived, ate, and 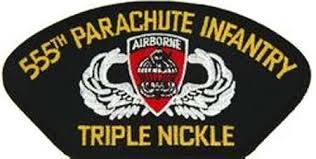 participated in recreation separately. Only their work life changed.

The 555th hoped that they would soon be sent to Europe to fight. Their hopes rose in December 1944 when they heard that the Allies were in need of reinforcements.

But the Army hesitated. The Allied paratroopers were all white. How could they send in African Americans as reinforcements? In the meantime, fate made a decision unnecessary. Germany was clearly in a slow collapse. The fighting probably wouldn’t go on that much longer.

Soon the Triple Nickles were told they were going to be sent West on a secret mission. The assumption was that they would soon help with the war in the Pacific. To their surprise, the group was split—some were sent to Chico, California. The remainder went to Pendleton, Oregon (northeast section of the state). The orders were called “Operation Firefly.”

In these two locations, the Triple Nickles learned of a top-secret threat to the United States that the government wanted to keep under wraps.

After much experimentation, the Japanese had discovered a way to mount an assault on the western portion of the United States using the jet air stream that flows from west to east. The Japanese found that the jet stream could successfully carry oversized helium balloons loaded with incendiary devices. The plan was to get the balloons to the West Coast and let the fire-starting devices drop. If enough fires could be ignited along the West Coast, Americans might be diverted from attacking overseas.

The calculation for these balloons was complex. The scientists saw that the balloons would take from 80-120 hours to reach the United States. The balloons were designed so that if they sank below 30,000 feet, a sandbag would drop, thereby letting the balloon regain altitude.  Their calculations allowed for dropping enough sandbags by the time the balloons reached the West Coast that the next devices dropped would be the incendiary devices. The final device that released was a small fragmentation bomb that was to destroy the evidence.

Nine thousand fire balloons are thought to have been sent, and it is believed that 1000 actually reached the United States.

The plan for the Triple Nickles was to join in with the U.S. Forest

Service to fight this threat. The Forest Service’s smoke jumping program was only six years old, so the Triple Nickles were among the early practitioners.

The Triple Nickles needed to be trained in forest firefighting techniques as well as bomb detonation methods, but they also needed to learn a new method of jumping. While paratroopers always jump into the clear, smokejumpers aim for the trees and then rappel down in order to land near a blaze. (The only fatality among the Triple Nickles involved an unfortunate fall from a tree.)

First Sighting of a Balloon

The first sighting of a balloon may have been in late 1944 by a crew of miners in Thermopolis, Wyoming. The fire that resulted was a distance from the mine, but the reports from the miners were taken seriously by local sheriffs, who explored what had dropped and called in the FBI, the Army, and the Navy.

A short time later, military planes began patrolling the West Coast to shoot down the balloons before they reached land. A few citizen watch groups were formed to help watch for sightings.

The military asked the press not to write about the threat. They didn’t want to alarm citizens, and they also didn’t want Japan to know that the balloons were reaching U.S. shores.

Triple Nickles Up and Jumping

Before long, 555th were working alongside other smokejumpers fighting blazes.

Though they didn’t know this at the time, none of the Japanese balloons actually set the fires the men fought, but the risk was very real. Over time, parts of the balloons have been found from northern Mexico to Alaska and from Hawaii and as far east as Michigan.

And there were fatalities from these devices.  In May of 1945 a pastor and his wife were taking a group of schoolchildren on a picnic when they came upon a device from a balloon. One of the children spotted it, not knowing what it was. The child picked up the device to show the others. The woman and five of the children were killed in the explosion.

Another near miss was when a balloon became entangled in electrical wires near the Hanford Engineering Works in Washington. The plant was making uranium slugs for the atomic bombs that were later dropped on Japan. Had there been anything longer than the few minutes of electrical interruption, the result could have been a meltdown like what happened in the Chernobyl disaster in 1986.

The Triple Nickles were an important part of this firefighting team, and the service had advantages. While some regretted not going overseas, those who were in Pendleton reported that there was more comradery and less segregation, and they got to do some sightseeing.

In October 1945, their mission was deemed concluded. The 555th spent the next two years at Fort Bragg. In December of 1947, their assignment changed. All men in the Triple Nickles were transferred into the 505th Parachute Infantry Regiment and became the 3rd Battalion of the 82nd Airborne—this was first military unit to achieve full integration.

The Triple Nickles had already achieved this by taking the initiative.

Walter Morris summed it up nicely in an interview with the Associated Press many years later: “We didn’t win any wars, but we did contribute. What we proved was that the color of a man has nothing to do with his ability.”

In so doing, they have inspired many men to become paratroopers and smokejumpers as well.

The Triple Nickles maintain a robust website so that others  can learn of what they accomplished. There is also a monument honoring them at the Airborne & Special Operations Museum in Fayetteville, North Carolina.

This is a clip from an event held at the Pentagon to honor them:

To read about another story about a World War II hero, read Dorie Miller’s story.

Another heroic story is that of 6888th Central Postal Battalion, the African American women who arrived in Europe to untangle the mail for the soldiers. By getting these letters and packages delivered, the 6888th single-handedly helped morale for World War II.