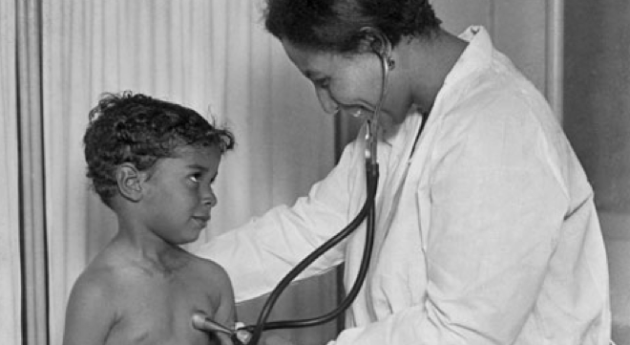 May Edward Chinn made significant contributions to medicine in both cancer diagnosis and as the only woman doctor in Harlem in the 1920s. 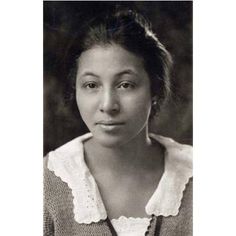 May Chinn (1896-1980) was born in Great Barrington, Massachusetts. Her father, William Lafayette Chinn, was a light-skinned slave who escaped from the Virginia Chinn Plantation when he was only 11. (The Chinn family of Virginia was from Scotland; this was the Americanized version of their name which was either deCheyne or Chein). He made his way to Massachusetts where he found work as a stable hand.

May’s mother, Lula Ann Evans, was born on the Chickahominy Indian Reservation near Norfolk, Virginia. She was of Native American and African American descent. She, too, moved to Massachusetts and met and married William.

William had trouble staying employed, partly because he drank. He decided work would be easier to find if he, Lula Ann, and their young daughter moved to New York City. Lula Ann quickly found a job as a housekeeper and cook.

Lula Ann was determined to provide May with a good education. She saved enough money to send her young daughter to Bordentown Manual Training and Industrial School, a boarding school for black children in New Jersey. However, May developed osteomyelitis (a bone infection) and had to return to New York to be treated. She then joined her mother for her recovery. Lula Ann was then employed at the Charles Tiffany Estate in Irvington, New York.

Life with the Tiffanys

The Tiffany family welcomed May as a member of their family. They included May in the Tiffany children’s schooling. She took music lessons just as they did, and she attended concerts and cultural events with the family.

When patriarch Charles Tiffany died, the estate was sold. Lula Ann and May moved back to the city and rented an apartment where William joined them.

Lula Ann continued to keep a watchful eye on May’s opportunities to learn. She knew white schools received better resources, so she often uprooted the family to move to a school district where May was likely to get the best education. May also continued studying piano.

In 11th grade, May dropped out of school and took a job tying ribbons on calendars in a factory. Her mother must have been devastated that she left school.

When applications were due at Columbia University Teacher’s College, a friend encouraged May to apply. Even without a high school diploma, May was accepted and entered the university in 1917 as a music major.

Paul Robeson, an aspiring opera singer at the time, was among those who admired May’s gifted piano playing. One day his accompanist did not arrive on time, and he asked May to accompany him. After that, she often played for him at his concerts in New York City.

One of the music professors at Columbia took issue with May’s race, which lessened her pleasure in some of the music classes.  In her unpublished autobiography, she wrote: “Because I was of African descent, [he said] that unless I could afford to go to Europe for final ‘polishing’ in my music, I would probably end up singing in a cabaret in America.” This was not the career May had in mind.

Fortunately, May had a well-rounded schedule of classes. In a science class, she wrote a paper about sewage disposal that caught the eye of the professor. The woman encouraged May to change her major.  May heeded the professor’s advice and decided science—eventually medicine—might offer her a brighter future.

In 1921, she graduated from college and was accepted at Bellevue Medical School. She was the first African American, male or female, ever admitted. In 1926, she was hired as an intern at Harlem Hospital. This, too, was notable, because at the time Harlem Hospital primarily served white people. They had no black doctors.

Because black doctors were not given visiting privileges at any New York area hospital, a few doctors grouped together to establish the Edgecombe Sanitarium in Harlem where they sometimes saw patients. Dr. May Chinn became their junior member. This provided her with an apartment where she and her parents lived, but it gave her the responsibility of all night calls. It was an exhausting time.

While the Sanitarium answered some needs, the doctors also found it necessary to make house calls. Sometimes they needed to perform surgery in a patient’s home. May learned to carry a small lamp from her office with her. Performing surgery on a dining table or a bed was difficult; if the lighting was poor it was all but impossible. 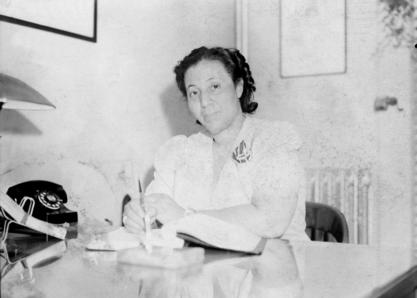 Because medical care was not readily accessible to the black population, Dr. Chinn saw many patients with advanced stages of cancer. She determined to try to change their prognosis.

Since African American doctors were denied hospital visiting privileges, this not only harmed their ability to serve their patients, but it cut off their access to more education. Hospitals often sponsored seminars for doctors, and the atmosphere around a hospital also permitted informal consultations with colleagues. Without a hospital connection, May Chinn and other non-white doctors lacked these opportunities.

Chinn was determined to learn, so when one of her patients needed to be seen by a specialist, Chinn went to medical appointments with them as the family doctor. On one of these visits to a hospital clinic, she ran into a professor who remembered her. He offered to teach her how to do biopsies. This broadened her opportunity to help her patients, and she soon began performing biopsies for other black doctors, so their patients, too, could benefit.

In 1940, Dr. Chinn was finally granted admitting privileges at Harlem Hospital after Mayor Fiorello La Guardia ordered hospitals to integrate. The Harlem Riots in 1935 spurred political pressure for the city to do so.

She became convinced that there must be ways to diagnose cancer earlier and possibly slow or cure it. In 1933, she entered Columbia University’s School of Public Health where she earned a Master of Science degree. Her studies there connected her to medical researcher and doctor George Papanicolaou. Papanicolau was developing cytological methods for the study of cancer, and May Chinn was among the doctors who contributed to his studies. (Papanicolaou established the parameters for the “Pap smear,” a diagnostic tool that has improved the cancer prognosis for millions of women of all backgrounds.)

In her work, Dr. Chinn pursued two paths to improve the health of her patients. Based on her exposure to Dr. Papanicolaou, she studied what could be learned from exfoliative cytology (cells that are shed from the body).

Dr. Chinn also valued personal health profiles and documented the backgrounds of her patients to better understand factors that might indicate a tendency for cancer. She also pioneered ways to conduct physical exams differently. Even if patients were asymptomatic for cancer, Dr. Chinn always promoted cancer screening methods as part of regular medical care.

Dr. Chinn’s work caught the attention of the science board at Rockefeller University. However, after she was offered a fellowship by the University, it was quickly withdrawn when the administrators learned she was African American and not Chinese, as they had supposed.

Dr. Chinn at the Strang Clinic

Dr. Elise Strang L’Esperance, founder of the Strang Cancer Clinic at Memorial Hospital, was more open-minded. In 1944, Dr. Chinn was assigned a Tuesday afternoon slot at the cancer clinic. Within a year she joined the staff. She remained connected to Strang until her retirement in 1974.

In 1954, she was admitted as a member of the New York Academy of Sciences. In 1957, she received a citation from the American Cancer Society for her work.

From 1960-1977, May Chinn also served as a medical advisor to the New York State day care center in New York.

Dr. Chinn became a legend in Harlem, and did not close her private practice until she was 81. Even then she still volunteered at health clinics in Harlem.

Toward the end of her career, she received special awards from 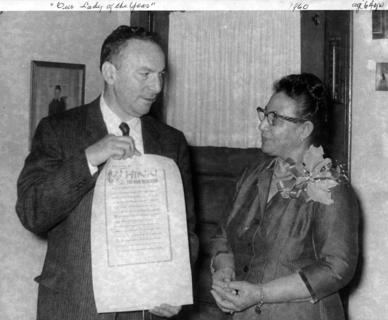 several schools. She accepted an Honorary Doctor of Science degree at Columbia University for her contributions to medicine. She was also recognized as a distinguished alumnus by Columbia Teachers College. The citation on her award from Columbia reads: “a brave warrior in the fight against sickness, poverty and injustice.” And New York University granted her a Doctor of Science degree for “long life service” for her pioneering work in early cancer detection and her dedicated service to her patients in Harlem.

Other Causes and Pursuits

To Dr. Chinn, civil rights causes and greater justice in the medical world were important. Before 1920, she campaigned for women’s suffrage; later, she worked for civil rights. She was one of the founders of Susan Smith McKinney Steward Medical Society, which aided black women in medical school. In 1977, she expanded her influence by joining the Phelps-Stokes Fund, an educational foundation for medical students from Africa to come to the U.S. for medical school.

She was also an active member of Delta Sigma Theta, a sorority founded in 1913 to support educational excellence among African American women.

She died in 1980, but she left an unpublished autobiography, offering this advice: “Become involved with the problems of your Nation, your State, your City, and especially your immediate neighborhood. Help those with problems—help them to take the next step UPWARDS.”

The photos of Dr. May Chinn were saved by George B. Davis who was at work on a biography of her. He published an article about her in The New York Times on 4/22/1979. There is no record of the biography.