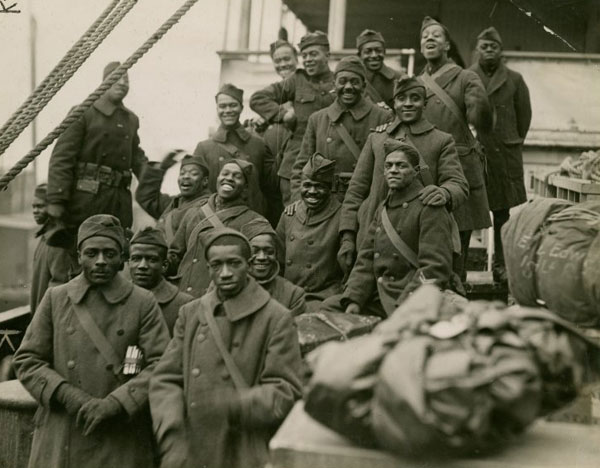 The “Harlem Hellfighters” was a name acquired by an all-black military unit from Harlem that fought during World War I.  Officially, they were the 369th Infantry. They became known for their fierceness and stamina, so their nickname was well-earned.

Their accomplishments were measurable. They served in continuous combat for longer than any other American unit; they fought the longest on the front during the Champagne-Marne offensive; and they were the first unit to cross the Rhine River during the Allied offensive.

However, the story of the 369th is two-pronged. The members of the unit set an example of character and heroism overseas, but the story is a disappointment because when they got home, America hadn’t changed—the men still faced the discrimination they knew too well.

How the Hellfighters Began

When the United States declared war on Germany on April 6, 1917, only four regiments in the regular Army were open to African Americans. The segregated units were restricted as to their duties. They could provide manual labor necessary for the war effort but they were not considered fit for combat. 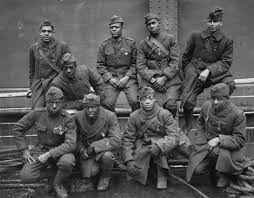 Many African Americans signed up or were drafted into military service so some of the National Guard units that accepted blacks had more men than they needed. For that reason, they were conscripted to be on loan to the U.S. Army. The Harlem Hellfighters initially were part of  the 15th New York National Guard before they were absorbed into the Army as the 369th Infantry.

All military units had to go through special training prior to going overseas, and the 369th was sent to Spartanburg, South Carolina.

African American men wearing the American military uniform inflamed the Southerners, who were very ready to attack these men despite the fact that they were now part of the U.S. Army. If members of the 369th were on leave and in town, locals pushed them off the sidewalks.

Yet many of the African Americans who enlisted remained hopeful. They felt that war service was an opportunity to prove themselves. If they showed they were good Americans, wouldn’t that help reduce discrimination at home?

The 369th Infantry Regiment arrived in France on January 1, 1918. They were under the command William Haywood, a prominent white New York attorney who had enlisted. He felt strongly that his men should be permitted to fight alongside white soldiers, but most military officers disagreed.

For the first three months, Haywood tried to get the men assigned to a fighting unit. The men themselves were kept busy doing manual labor, primarily unloading ships and digging latrines. Finally, a compromise was reached. The French Army had suffered devastating losses and were in desperate need of replacement units. The French were also comfortable working alongside people from different backgrounds, as this was not a problem in France.

Haywood agreed that the 369th Infantry Regiment could be assigned to fight for the Allies but under French command.  This caused some confusion as they would continue to wear American uniforms, but their helmets would be replaced by the “Adrian”-style helmets worn by the French. They were issued brown leather belts and pouches that were used by the French.

They were also expected to use French weaponry, something they had to pick up quickly. By using the same weapons as the French, they would have correct ammunition and spare parts if needed.

In their hierarchy of order-taking, they were totally under French control. 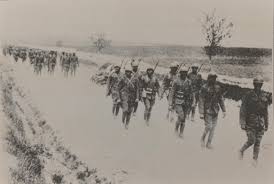 But strong prejudice existed, and General John J. Pershing, commander of the American Expeditionary Forces in the Western Front, warned the French military what they were taking on.  (Fortunately, the 369th unit was unaware of Pershing’s actions until much later.)

Pershing sent out a pamphlet entitled: “Secret Information Concerning the Black American Troops.”  The directive warns the French that if they work too closely or too well with the members of the 369th, then Americans would hold it against them:

“The increasing number of Negroes in the United States (about 15,000,000) would create for the white race in the Republic a menace of degeneracy were it not that an impassable gulf has been made between them…”

Later the booklet states: “Although a citizen of the United States, the black man is regarded by the white American as an inferior being …”  (The pamphlet can be read in its entirety at the Gilder Lehrman Center for the Study of Slavery, Resistance, and Abolition.)

While the Pershing booklet was being read (and more or less ignored by the French who were accustomed to fighting alongside colonists from other countries), the men of the 369th were dedicating themselves to doing their part to win the war.

The Hellfighters became known not only for their fearsome fighting (see the profile of Henry Johnson that describes how they earned their reputation), but they also proved their endurance: They fought from the trenches for 191 days—longer than any other American unit.

None of their soldiers were ever captured though they did eventually lose about half the regiment (1500 losses) toward the end of the war. Ultimately, their war record showed a unit that consistently went above and beyond to fight for the Allies.

After the war, the French Army acknowledged their fine work. The regiment was awarded the Croix de Guerre, the highest honor given by the French. There were also 171 individual medals awarded to members of the 369th.

Known for Their Music

The unit also had another claim to fame: they were known for their music. The 369th Regiment Marching Band was commanded by James Reese Europe, one of the best-known jazz band leaders in the U.S. He and the military band are said to have introduced jazz to the Allies.

The 369th was the first full regiment to return to the United States so they were first to be honored by a parade. The festivities began early on the morning of  February 17, 1919.  The Harlem Hellfighters paraded up Fifth Avenue from 23rd Street to 145th Street and Lenox Avenue.  The schools in Harlem were dismissed for the day so students could be on hand to welcome the soldiers home.

At the parade’s conclusion, the men, followed by family and friends, loaded up subway car after subway car to travel to the 34th Street Armory where the celebration continued.

But this parade was to be the only one in which they were included. When a Victory Parade was held in later months for the entire military, the Harlem Hellfighters were not permitted to participate.

Known for Other Accomplishments

Several of the members of the 369th went on to distinguish themselves in other ways. This website has stories about these three soldiers:

Henry Johnson–Johnson was deemed a hero and received numerous awards. The military used him as a spokesperson to recruit more African Americans.

James Reese Europe was famous during World War I as the military brass loved the music he and his band created. Europe went on to continue playing jazz and ragtime when he returned to the United States.

To read about another unit that was important in World War I, read WWI: U.S. Recruits Women Operators.

11 thoughts on “Harlem Hellfighters: Black Soldiers in World War I”