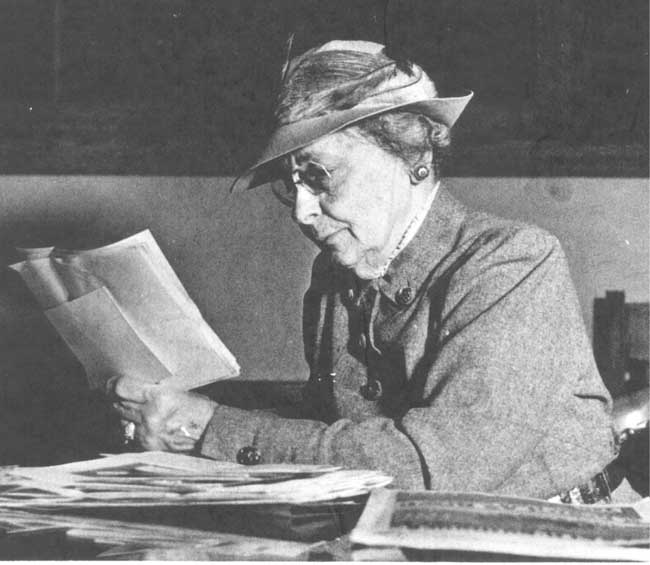 from the start of the business in 1891, and she became president and CEO in 1908 when her husband Charles died unexpectedly. When Rose Knox took over, she re-oriented the company marketing to more directly address women. The company grew and expanded as a result. Eventually her son, James, joined the business but Rose Knox remained active until 1947. Until her death she held the title of chairman.

Rose Markward (Knox) was born and raised in Mansfield, Ohio where her father was a druggist. In the late 1870s, the family moved to Gloversville, New York.  Rose moved with them and found a job working in a glove factory.  She also met one of the company’s salesmen, Charles Knox. They married in 1883.

Soon Charles Knox took a job as a knitwear salesman, which took them to New York City, then Newark, New Jersey, and eventually, Johnstown, New York. 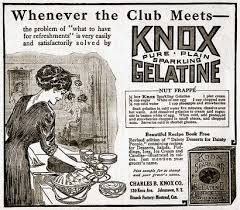 Rose and Charles Knox had a marriage that was a partnership. He took a portion of the money he made each week and gave it to her to manage the household. Charles was one of the top knitwear salesmen in the country, and as his income increased so did her weekly allotment.

During this time, they became parents of three children.

How Gelatin was Made

The process of making gelatin involves extracting collagen from animal bones. To do this in a home kitchen, the bones are boiled for most of the day, and then the mixture is strained to separate the bones so as to discard them. The liquid is then left out for about a day to settle. After skimming the fat off the top, flavoring is added. The result can be a flavorful, protein-rich gelatin dessert.

As Charles Knox observed Rose making gelatin in their kitchen, he wondered about a way to simplify the process. While there were some other powdered gelatins newly on the market, the Knoxes did not find them to be satisfactory, so Charles experimented. Eventually he developed a way to create pre-granulated gelatin that pleased them both.

Rose had always been frugal with the money allotted to the household, and she had managed to set aside $5000.  When Charles and Rose heard that a gelatin business was for sale in Johnstown, they decided to buy it.  Johnstown was also a city with many tanneries so animal parts were easily available.

Using the method Charles created, the factory began to produce sheets of pre-granulated gelatin. Charles hired some salesmen who took to the road to begin introducing and selling the product. 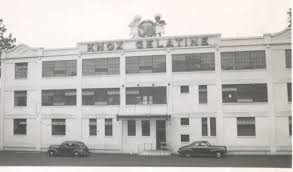 To expand the market, Rose created recipes that showed all the ways the product could be used.  She soon completed a recipe book (click here to read a copy), Dainty Desserts for Dainty People. Printed as a pamphlet, the books were given away in grocery stores. The use of gelatin grew in popularity.

Charles Knox was very much a marketer. He looked for ways to create publicity opportunities that would publicize Knox. He was probably the first advertiser to use motorized balloons with advertising on them. These were sent to air shows around the country. Knox also owned race horses, publicized as the Gelatine String (gelatine was the preferred spelling at that time). His best horse, one that raced in all the major races, he renamed Gelatine King.

As the business grew, Knox acquired more businesses, including a hardware store and a factory that manufactured soap, ointment, and tonic.

In 1908 he took his two sons to Canada on a fishing trip. On the return home, Charles did not feel well. In Montreal, he booked the boys on a through-train home, and he went to the hospital. He was diagnosed with a heart ailment and did not survive. Rose was devastated.

Rose Knox Takes Over the Business 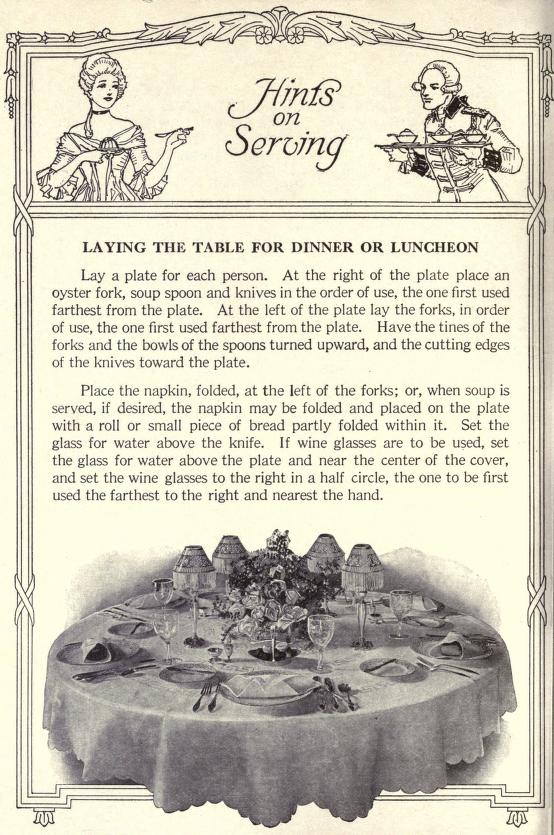 Friends urged her to sell the business, women just didn’t run major businesses in that day.  But Rose Knox knew she was totally well-suited to take over. She soon announced that her position was temporary, “until her sons could run the company.”

Only one employee resigned, saying he was incapable of working for a woman.

She took two steps immediately. She sold off the tangential businesses, and she redirected the marketing to women, the customers who made the family food choices.

Rose Knox also took an interest in her employees. Most of the workers in that day entered their workplaces through back entrances. Rose closed off the back door at Knox, saying: “We are all ladies and gentlemen working together here, and we’ll all come through the front door.”

Rose Knox’s new marketing plan for the Knox Gelatin Company emphasized the high nutritional value (almost 100 percent protein), and the product’s low cost.  She inspected her factory and improved the production plant to assure sanitary conditions—something she knew women would care about.  She also undertook new cookbooks. By 1917 she had issues a book called Food Economy, and many of the company ads featured her recipes under the heading: “Mrs. Knox says…”

By 1915 the value of the company had tripled, and the Knox company built a bigger plant. Rose Knox also negotiated to buy a half interest in Kind and Landesmann, one of their major suppliers.

Rose Knox built a specialized kitchen for investigating new uses for gelatin. She believed in the product and felt it had many uses.  In the 1920s Knox Gealtin produced the first pharmaceutical gelatin, primarily used to encapsulate medicines, what we now know as gel caps.  Later her scientists developed a “plasma extender” which could be used as blood plasma substitute during World War II when there were shortages. The company also increased the use of gelatin in photography.

In 1913 Knox instituted a five-day work week along with two weeks’ paid vacation per year and paid sick leave. During the Depression, she was determined not to have to fire employees. She cut business costs where she could and still managed to grow the business 5 percent per year.

In November of 1937, Rose Knox’s staff policies made news. Time magazine, 11/29/1937, noted that 85 percent of their employees had been with the company for 25 years or more.  The writer mentioned that there was a sign in the Johnstown company lobby that deemed it  “Happiness Headquarters.”

Rose Knox also believed in giving back to the town where she had achieved so much.  She donated money to everything from the Y to a fund to build an athletic field, and she purchased a church so the town could convert it to a home for aged women. She also served on

She remained president of the company until 1947 when her only still-living son, James, took the helm. Even then, Mrs. Knox continued to remain active as Chairman of the Board.

She died in Johnstown at the age of 92.

In 1929, Rose Knox was the first woman to be elected director of the American Grocery Manufacturers Association, and in 1949 Collier’s magazine referred to her as “America’s foremost woman industrialist.”

The Knox family maintained control of the company for many more years. The grandson of Charles and Rose took over when his father died, and John Knox added new products including Knox Drink for Nails and Knox Eat and Reduce Plan.

In the early 1970s, the T.J. Lipton unit of Unilever bought the company. Then in 1994 Nabisco acquired the American rights to Knox gelatin to add to its Royal Desserts Line (Nabisco is now part of Kraft).  Kind & Knox became a wholly owned subsidiary of a German-based gelatin producer, DGF Stoess AG, which now operates largest gelatin company in the world, providing gelatin for industrial applications, pharmaceuticals, and photography.

1 thought on “Rose Knox: Foremost Woman Industrialist of Her Day”