James Pierson Beckwourth was born in Virginia in 1798. His father was Sir Jennings Beckwith, a Revolutionary War military officer of Irish and English descent. James was the third of 13 children, some of whom were born as a result of Beckwith’s relationship with a slave, making those children slaves as well.

In the early 1800s, Beckwith moved away from Virginia with his entire family and their slaves.  At this time, St. Louis was a popular portal to the west, so there were great opportunities. Beckwith chose to put down roots there.

Despite his status as a slave, James was raised as a member of the family. He attended school for four years, and he often hunted with his father. As he grew older, Jennings Beckwith arranged for James to apprentice with a blacksmith, and he gave James his freedom at that time. (At some point, the spelling of his last name became “Beckwourth.”)

Pelt Sales and The Call of the West

During the early 19th century, white men relied on the Native American people to bring pelts to trading posts. In return, the white men provided them with trinkets and lots of alcohol. But drunken Native Americans often caused chaos in communities. In 1822, a law was passed that prevented distributing alcohol to those who brought in pelts. 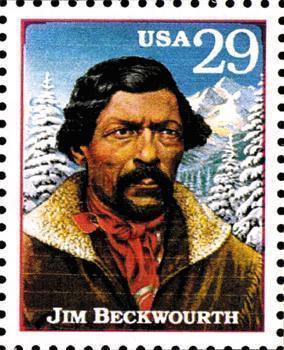 A fellow named William Henry Ashley and his partner, Major Andrew Henry, saw this as an opportunity to create a fur-trapping business. The 1822 law resulted in a decrease in Native Americans coming in to trading posts, so Ashley and Henry realized they should send men out to trap and trade. They created the Rocky Mountain Fur Company and needed to hire men who were willing to travel through Colorado, Utah, Wyoming, and Montana. Ashley’s ad read: “One Hundred Enterprising Young Men…to ascend the river Missouri to its source, there to be employed for one, two, or three years.”

The results from the ad were great. Many of the mountain men who went on to make names for themselves started with this group. It included Jim Beckwourth, Jim Bridger, and Jedediah Smith as well as William Sublette and Hugh Glass. (Glass is the person on whom the movie The Revenant is based.)

Since Native Americans were no longer traveling to trading posts with their pelts, Ashley and Henry knew they needed to come up with a new way to collect the furs. If the mountain men were trapping in the back woods, bringing them back to civilization was a waste of their time. They needed to create a way for company representatives to meet with the mountain men, pay them, and take away the pelts each year.

This was how the rendezvous was created. The first was held in 1825. A year after sending men out on their journeys, the Rocky Mountain Fur Company told Ashley’s Hundred to be at Henry’s Fork in the Green River Valley of Wyoming, the following July.

Company representatives collected the pelts, paid the men, and provided enough food and alcohol for the men to swap stories and party for several days.  For the mountain men, these were great occasions for coming together to socialize. Beckwourth was admired for his knowledge of the west and well-loved for his story-telling ability.

Each year, a new spot was set for following year’s rendezvous.

Beckwourth is described as a notable presence. He was about 6 feet tall, very strong and well-built. His dark skin would have set him apart from the white mountain men. This may have aided in his ability to connect well with the various tribes he encountered while hunting and trapping. 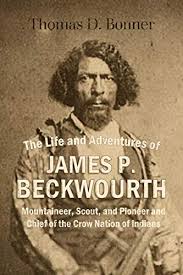 Violence between the trappers and mountain men sometimes occurred, but most of the meetings were peaceful, particularly with the Crows. The Crows themselves considered themselves “sparrowhawks” or “Absaroke,,” for some reason white men called this Plains tribe the Crows.)

At one of the peaceful meet-ups, one trapper explained to a group of Crow that Beckwourth was actually a member of their tribe—that was why he was so dark. Jim was kidnapped as a young boy and raised among whites, but he belonged with the Crows.

Within a few months, Beckwourth was welcomed by the tribe. This connection may have started as a business deal. Beckwourth arranged for the pelts from the Crow tribe to be sold to the Rocky Mountain Fur Company. He also learned a great deal about hunting and trapping from the Native Americans.

Life with the Crows

But clearly, Beckwourth came to enjoy the life. He remained with the tribe for 12 years. He took several wives and proved adept at all the qualities the Native Americans prized, eventually becoming a Chief within his tribe.

According to Beckwourth’s book, The Life and Adventures of James P. Beckwourth, Native Americans counted their wealth in horses—not money. Guarding one’s horses or raiding another tribe for their horses was an important part of everyday life for the tribes. In reading Beckwourth’s story, readers learn a great deal about horse raids.

The fellow doing the raiding was described as having the advantage as he and his companions could continually ride fresh horses. As the herd traveled, the riders could jump from horse to horse as one tired. Keep in mind that the horses would have all been unbroken, and the men would be riding bareback—impressive.

After 12 years of living among the Crows, Beckwourth opted to return to civilization. In his book, he seems weary of the constant raids that Native American life entailed. He wanted to look for something new.

The Fate of the Fur Company

By this time, the Rocky Mountain Fur Company had changed. In the early 1830s, Ashley and his partner sold the company to a group of the mountain men who continued the business. Ashley went into politics, and Major Henry started another business of a different type.

For the trapper/owners, interest was fading. The beaver population dwindled from over-trapping, and silk hats began to be favored over fur hats. The Rocky Mountain Fur Company went out of business. Any gap in the market was filled by Astor’s American Fur Company and Hudson’s Bay Fur Company.

Beckwourth returned to St. Louis but saw that city life was not what he wanted. In 1837, he accepted a job offer to move to Florida to participate in the Second Seminole War. Records show that he was a mule driver, but his book tells stories of carrying messages, which he probably did. After so many years of living with the Native Americans, he was very skilled at moving through unknown territory without being detected.

When he returned to the West in the late 1830s, he sought work along the Old Spanish Trail. In 1842, he moved north to the Arkansas River, which was then the dividing line between the U.S. and Mexico. Recognizing that a trading post was needed, he and some partners established El Pueblo. The fort was built where Fountain Creek joined the Arkansas River on its way to the Mississippi. The site is now the location of Pueblo Colorado.

El Pueblo became a welcoming home for native people and immigrants from all over, particularly during the winter. The French, Canadian, Iroquois, and Mexican trappers and traders were delighted to find a spot where they had shelter and could trade without having to travel all the way to Taos or St. Louis.

The lure of gold took many, including Beckwourth, further west. Beckwourth became known for his knowledge of the mountains and his ability to steer clear of Native Americans. He was frequently hired as a guide for those who wanted to prospect in California.

If a group made it through the Rockies, the next challenge was the Sierra Nevada Mountains.  The Donner Pass was extremely difficult, and the wagon train that was stranded there in 1846-47, made travelers eager for new routes. Beckwourth knew about a pass about 75 miles north of there that was at a lower altitude and therefore a little easier to cross.

In 1850, he began leading individuals and wagon trains through that pass (now known as Beckwourth Pass) and on to a trail that wound through Ploumas County. When the weather permitted, he worked to improve the trail from there Pass to Marysville. It is now known as Beckwourth Trail. This route was very important until 1855 when the railroad began taking people west.

The story goes that one of the wagon trains that hired Beckwourth to get them safely to Marysville, then refused to pay him when they arrived. They claimed it was not necessary to pay a black man, and because of his color, he had no legal standing and could not sue.

While in the gold fields of California in 1854-55, Beckwourth and a Justice of the Peace named Thomas D. Bonner became friends. Bonner convinced Beckwourth to tell his story so that Bonner could write it down.

The book, The Life and Adventures of James P. Beckwourth, Mountaineer, Scout, and Pioneer, and Chief of the Crow Nation of Indians, was published by Harper and Brothers in 1856. It is the first recorded version of life in the West by a mountain man during this era.

Historians initially dismissed the book as nothing but folk lore, but over time, many have given it a second look. Mountain men and Native Americans relied on oral story-telling, so there is little doubt that Beckwourth remembered a lot and could tell a good story. He may have embroidered the truth to inflate his role in some of the adventures, but the book is still a valuable document of life as a trapper, explorer, and guide of the west. There are very few documents that give such a clear view of life among the Native Americans.

Later in the 1850s, Beckwourth returned to Colorado Territory, this time going to Denver.  He often picked up work as a scout but by 1859 Beckwourth settled in Denver as a storekeeper.

At some point, he was hired to lead the military to find the Arapaho and Cheyenne camps in southern Colorado, and the unfortunate result was the Sand Creek Massacre. During this raid by the military an estimated 150-500 Native Americans—many of them women and children—were killed. The tribes in the area could not forgive Beckwourth’s betrayal, and by 1866 Beckwourth was moving on again, working as a scout at Fort Laramie and Fort Phil Kearny.

It was during this time that the 69-year-old Beckwourth fell ill and died.  He was guiding a military unit in Montana but didn’t feel well, so he returned to the Crow village from which the group had departed. He died there amongst the Crow Indians.

The Crow Indians honored Beckwourth by treating him as a Crow warrior. As was Crow custom, he was “buried” on a platform in a tree near the village to which he had returned.

To read about another fellow who was in the West at this time, click on Sculptor of Rushmore Gutzon Borglum.

The Life and Adventures of James P. Beckwourth: Mountaineer, Scout, and Pioneer and Chief of the Crow Nation of Indians, as dictated to Thomas D. Bonner, published 1856.