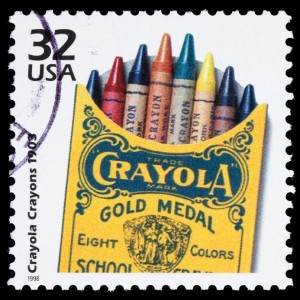 Binney & Smith, now Crayola LLC, was an outgrowth of a chemical company that made pigments. The company started in 1864 in Peekskill, New York, and Joseph W. Binney was the owner. His son and a nephew took over when he retired, and they re-named the business Binney & Smith.

Peekskill Chemical Works sold their pigment product, “lampblack,” to foundries and to the cast-iron stove manufacturers that were located nearby. As the business grew and pigment was shipped elsewhere, the company used wax marking crayons to label the boxes. Later on, these wax crayons would be a main part of their business in the form of Crayola crayons.

Binney & Smith was not the first in the wax crayon market, but they gained a reputation for producing an excellent product that was entirely safe (chemical-free) for children to use. 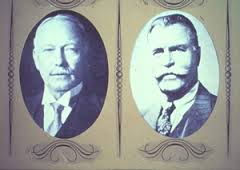 In 1885, Joseph Binney retired. Edwin and Harold were happy to take on the business and started using its new name, Binney & Smith.

Edwin Binney enjoyed working with the chemists on the behind-the-scenes side of the business. Smith had lived abroad at various times in his life so he was the logical person to travel to Europe and Asia looking for new pigments to sell. His most notable early addition was one he found in Newcastle in the United Kingdom. He bought American rights to what became known as “barn red,” a protective coat of paint that sold well to farmers.

In the meantime, Edwin Binney was investigating new ways to expand their line at home. Some businesses were marketing a new pigment known as “carbon black,” which was a byproduct of the drilling for natural gas that was being done in western Pennsylvania.

Edwin Binney was very taken with the possibilities, and in 1892 he received a patent for an apparatus that permitted the mass manufacture of carbon black. Soon Binney & Smith became one of the major producers of the pigment.  (In 2011, Edwin Binney was honored posthumously by the National Inventors Hall of Fame in recognition for his invention.)

As a result of this business expansion, part of the company relocated to western Pennsylvania, near Easton. This location opened even more business opportunities. As the company processed the carbon black, Binney assigned his staff to work on ways to use the waste from the slate removal process. The result was an excellent, inexpensive slate pencil.

At the turn of the 20th century, school children each had their own slates (like small two-sided blackboards) since paper was expensive and not easy to come by. The students used slate pencils to write on these tablets, and the softer the pencil the better. (The marks from a slate pencil are very much like markings of chalk and can be easily wiped away using a cotton cloth–or even a sleeve.) 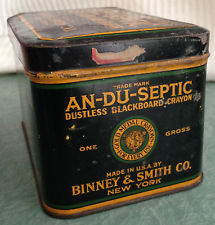 As Binney & Smith became familiar with the school market, Smith began listening for what else teachers needed. Two requests came up again and again: chalk that didn’t produce a dusty mess, and inexpensive wax crayons children could use for artwork.

Binney’s staff in Pennsylvania continued experimenting. They found that if they added cement and talc (which came from a mine near Easton) to the slate waste, they had a dustless chalk. Eventually they developed what Binney named An-Du-Septic chalk, a dustless chalk.

The Binney & Smith chalk won a gold medal at the 1904 St. Louis World’s Fair. Teachers loved it and were delighted to do away with the chalk that left a residue on their fingers and clothes, not to mention dust in the air in the classroom.

In the meantime, Binney & Smith expanded. The men decided to divide the company into two parts. The Pigment Division focused on paints and pigments for industrial use; the Crayola Division sold school products,

The pigment side of the business flourished first. In 1911, Binney & Smith received an order from B.F. Goodrich for an annual supply of one million pounds of carbon black. Tire companies saw that black tires looked better, but more important, the carbon black pigment greatly extended the life and durability of the tire.

The first wax crayons in the U.S. were imported from Europe, but by the 1880s, a few American companies were making them, too. Franklin Manufacturing in Rochester, New York, began with lumber and marking wax crayons, and by the 1880s, they expanded into the colored crayon market. Other companies, including Louis Prang (maker of early Christmas cards) and the Milton Bradley game company made wax crayons as well. 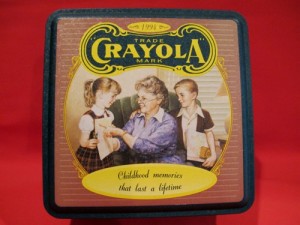 In addition, a good number of companies—including pencil companies that wanted to benefit from more sales—entered the wax crayon market before Binney & Smith. But because there were few national publications through which to advertise to the school market, each company found its own niche.

Edwin Binney assigned his chemists to work on ways to create a chemical-free crayon. Their current crayon, called “Stayonal (stay-on-all),” contained components that should not be handled regularly by school children.

By 1903 they were satisfied with their new product. Binney & Smith produced their first box of eight colorful crayons that year. Alice Binney, who was a former teacher, is credited with coming up with the Crayola name under which the crayons were released. (“Craie” means chalk in French and “ola” was a shortened form of the French word, “oléagineux,” which means oily.) 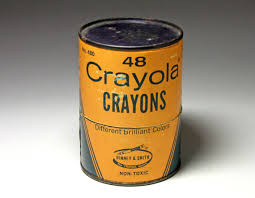 At first, the boxes were sold door-to-door for a nickel. Each box contained crayons in these colors: red, orange, yellow, green, blue, violet, brown, and black.  Each crayon was wrapped in paper and labeled as to color.

During the Depression, Binney & Smith hired farm families to hand-letter the papers and wrap the crayons. This provided work in an economic downturn, and over time, certain farms became known for their color specialty.

The Crayola division continued to add products. Over time, they added colored pencils and markers, and today there are many craft supplies made by the company.

The big seller, however, has always been crayons. And from the beginning (1903), they recognized the growing interest in art education. For that more refined market, they created the Rubens-Crayola crayon. 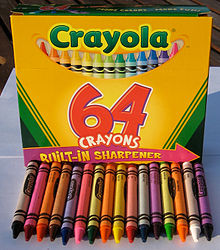 In 1949, the box was expanded to hold 48 colors placed in a box with “stadium seating,” and in 1958 the classic 64-color box was introduced with a built-in sharpener.  In 1993, ninety-six colors were packaged into what they called the Big Box.

Over the years, the company added colors and has also responded to public pressure on certain names.  In 1962, they renamed the “flesh” crayon “peach” in recognition that there are many colors of flesh. The public also objected to “Indian red” though the company explained it was a reference a red dye in India. No matter, the public wanted a new name. Indian red was changed to chestnut (1999). Teachers also pointed out that “Prussian blue” was meaningless to children. The company of Prussia ceased to exist in 1947, so they renamed the blue midnight blue.

Crayola has long recognized the importance of public opinion, and that is part of their success. In 1993, they ran a “Name the New Colors Contest.” Almost two million people entered. The oldest winner was an 89-year-old woman who submitted “purple mountain’s majesty” for a new shade of purple, and the youngest was 5, who submitted “razzmatazz” for the raspberry red crayon. To read all the new color names and their winners, click here. 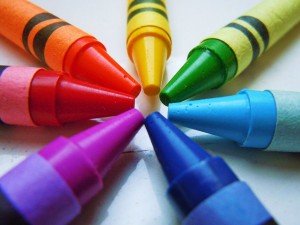 Eight years later, the company wanted to know the most popular color. In 2001, they conducted the Crayola Color Census and the undisputed winner was the color blue; runners-up were various shades of blue.

The name Crayola is recognized by 99 percent of American households, and while crayons are still their primary product, they now sell many forms of craft products.  They also own manufacturing rights for Magic Markers and purchased Silly Putty in 1977.

In 1961 the company became publicly held, and in 1984, Binney & Smith became a wholly-owned subsidiary of Hallmark. In 2007, they changed their name to Crayola, LLC. As a well-known consumer company, Crayola has capitalized on their popularity. There are two museums, the Crayola Experience, dedicated to children and creativity. One is in downtown Easton, near the factory, the other is in Orlando, Florida.

How Are Crayola Crayons Made?

Of course, one question people always want to know is “how are crayons made?” Surprisingly, the method used today is similar to what was used long ago, but now it is automated.  The factory can produce 8500 crayons a minute.

There are some good YouTube videos put out by the company that tell the story of crayon production. The YouTube video I would recommend is not the most recent but this one is short and succinct.

As the founders became wealthy, both made good use of their time and their money. Edwin Binney and his family split their time between Old Greenwich, Connecticut, and St. Lucie County, Florida, on the eastern coast near Boca Raton.

In both communities, he was well-respected. In Greenwich, there is a Binney Lane that runs right down to the water, and in St. Lucie County, he is credited with having had the vision to turn Fort Pierce into a port, now called Port Lucie.

C. Harold Smith stayed in the New York City area, and he was active in many civic organizations including the Union League Club of New York, the Transportation Club, the Upton Club, and the Hudson River Country Club.

I am grateful to crayon historian Ed Welter for his help in making this story as accurate as possible. He also has a Crayon Collecting website that tells the full story of the crayon industry. To read it, click here.

For another interesting story about a product sometimes used when doing home art projects, see Elmer’s Glue: The Surprising Story.

Crayon historian Ed Welter was crucial to checking the accuracy of this article. For more information on crayons, visit his website, www.crayoncollecting.com

11 thoughts on “The Inventors of Crayola Crayons: Binney & Smith”