Dog trainer Carl Spitz (1894 –1976) was a German immigrant who made his way to Los Angeles where he founded the Hollywood Dog Training School in 1927 and became famous for training many of the dogs used in the movies.  The Spitz family dog, Terry, played the role of Toto in The Wizard of Oz. (More about Terry/Toto next week.)  Spitz was also a major participant in training dogs for World War II.

In the 1930s Carl Spitz teamed up with writer Bernard Molohon to write Training Your Dog, published in 1938 by the Marshall Jones Company. The book was intended as guide to families who wanted to raise obedient, well-mannered dogs; it was not intended to teach tricks, just to create good family members.

Luckily for us, however, Spitz included one chapter on training dogs for the movies, and it is a delightful chapter because it provides great insight as to the process of animal-and-trainer and the camera.

Right away, Spitz makes a couple of important points:

As a trainer, Carl Spitz bridged the era from silent films to “talkies,” and he noted that this greatly changed the communication methods that could be used between trainer and dog.  The pair had to transition from verbal cues to totally silent ones. 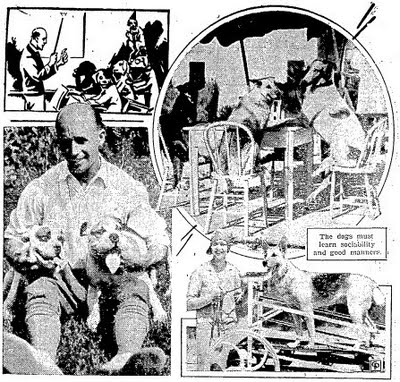 To illustrate the process, Spitz noted that teaching a dog to bark, growl, or whine on command is very difficult to do when the master is not going to utter a word. Spitz describes the process of re-training a dog to silent cues: “As you start on the ‘Silent’ cue, you will still use your voice for giving this command, but at the same time you shake your right forearm in front of you as a cue. Little by little you drop your voice, until your dog obeys the command just on the cue of the arm.”

Spitz uses one of his experiences to describe what is sometimes necessary in film work. He was in charge of a dog in a movie called River’s End, and the dog needed to follow four different commands on cue at an exact time…in one take.  It was a scene in a bedroom involving Charles Pickford and Junior Coughlan, and the set was tight—three cameras, many lights, the technical people and the actors and the dog left scant room for Spitz.  Every time Carl moved to a location everyone thought would be better for him, he would hear a cameraman holler: “Carl, you’re in the scene.”

Finally the only logical option was for Spitz to crawl under the bed and give cues from there. The scene began, the actors acted, and the dog just sat there…

bed were the same signals as someone standing upright!  Ultimately, the scene was shot successfully.

Call of the Wild

Spitz also describes the challenge of a dog accomplishing simple feats. “The dog is lying in a ‘down’ position in the middle of the room. On the trainer’s cue he has to get up, walk over to a certain door, open the door and go out.”

Spitz notes that it requires training and rehearsal so that the action is correct—and correctly timed to fit with the actors’ dialogue, which is meaningless to the dog.

Another example Spitz uses concerned Call of the Wild with Clark Gable and Loretta Young.  Clark is sitting at a table; Loretta Young is kneeling at the fireplace making pancakes, and Buck, a St. Bernard, is asleep next to Young.

Gable says: “did you hear a noise outside?”

The moment Gable says “did” Buck needs to raise his head very quickly and give an alert expression looking toward the window.  Young responds with, “Maybe the wolves are around again.” And by this time Buck is to have jumped up, raced toward the door and gone out.

Buck’s greatest challenge in this scene involves “playing asleep” while being alert to the expected cue… with Spitz outside the house.

Spitz notes that when people have been to a movie where the dog simply acts like a dog, that he’ll hear people say, “My dog could have done that, too.”

Spitz writes: “I can only ask these folks not to forget that it is much, much harder to teach the dog to perform like a dog, than it is to teach him circus or stage tricks.”

And remember, too, that in one film the dog is a lovable companion; in the next film he may be a villain… or in one scene he is expected to refuse food; in the next scene is to steal it!

Spitz concludes the book with this  sentiment: “I firmly believe that humans could well afford to stop a minute now and then and think just how fine it is to have companions and friends as loyal, trusting, courageous and, above all, as intelligent as dogs.”

Later this month I will be visiting a currently-operating animal training company and will report back to you as to whether the methods Spitz used have been changed in any way.

8 thoughts on “Dog Training for the Early Movies”