In the 19th century many people could not read, so store owners placed carvings of various symbols in front of their shops so passersby knew what was sold inside. A carving of a wooden Indian indicated a tobacco store; a red, white and blue striped pole symbolized a barber; three gold balls represented a pawn shop; a mortar and pestle indicated an apothecary.

The use of the carved Indian as a symbol in front of a tobacco shop began in England the early 1600s as the ships from America began to bring back tobacco. The symbolism of the statues was because the source of the tobacco supply at that time was from Native Americans.  By 1650 tobacco was growing in popularity, and in London, several cigar store Indians gave rise to what became a form of signage that was used for 250 years.  These early carvings were made by carvers who had never seen a Native American so they were based on drawings or descriptions from those who had visited the colonies.  The sculptures were sometimes called “Virginians” or “Virginnie men” to clarify what they represented. 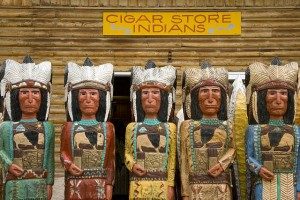 The colonists also enjoyed tobacco, but initially, towns were small enough that townspeople simply knew where they could buy certain items.  By the 1850s, cities were increasing in size and there were more stand-alone tobacco stores. This was when the Cigar Store Indian took its place on American streets.

Most of the men who carved cigar store Indians came from a shipbuilding background where they specialized in sculpting wooden figureheads for each ship.  These carvings—figureheads and store carvings–were generally out of a single piece of wood,  (An outstretched arm sometimes had to be attached separately.)  Everything from the selection of the material to the artistry of the carving made a difference.

Because there were not many carvers, cigar store Indians were not widely available until the 1850s when the shipping industry began to switch from wooden ships to ironclad steam vessels, and the ironclads had no need for figureheads.

When the ship-carving business dried up, the artists were delighted to turn to carvings for retail establishments.

Not every tobacconist wanted an Indian for the shop. Another popular figure for tobacco stores were Turks wearing turbans, soldiers in uniform, or a fashionable lady.

Each Cigar Store Indian Had a Personality

The statues used to mark various stores took on personalities given them by the townspeople.  In Reading, Pennsylvania, the cigar store Indian was known as Old Eagle Eye. Chief Blackhawk, carrying a warrior’s club and a lion skin, lived on the streets of Louisville, Kentucky.  Chief Semloh was created in 1849 in San Francisco, and he lasted on the streets there until the San Francisco earthquake in 1906. Semloh was removed from the street, but someone took an interest in tinkering with him. They made it so he could blow smoke through his mouth and talk through a loudspeaker in his chest.

Two of the more famous carvers of the nineteenth century were Julius Melchers (1829-1908) and Samuel Robb (1851-1928). Melchers was a German-born sculptor who immigrated to the U.S. in 1848 and settled in Detroit, where he established himself as a carver.  In addition to carving cigar store Indians, he did other types of sculpture.  In the late 1860s, Melchers was commissioned to carve the “larger than life” sand stone statues of Detroit’s four French pioneer: Antoine Cadillac, Father Jacques Marquette, Robert de LaSalle, and Father Gabriel Richard.  These were installed at the old Detroit City Hall in 1874, and they are now are on view at Wayne State University. 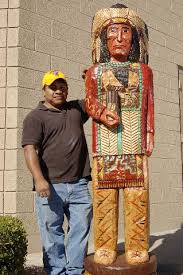 Samuel Robb was born into a family of Scottish ship carvers, and he grew up in Brooklyn, New York.  In his teens he apprenticed to a shipbuilder, and then took a job with a wood-carver where he further perfected his art. At night Robb took classes, first at the National Academy of Design, and then at Cooper Union.  In 1876 (when he was 25) he opened his own shop in New York City, and it became the largest shop of its kind during the 19th century.  Robb became highly sought-after carver for his ability to create a wide variety of figures ranging from cigar store Indians to circus wagons and ventriloquist dummies. Because he was highly sought-after he eventually opened a second workshop.

Beginning in about 1890, city streets were becoming increasingly crowded. Many cities passed laws requiring two feet of open space in front of each store.  In addition, tobacconists were expanding their product lines.  As a result, many of the cigar store Indians were retired or tossed. Today there are not many left. Those that exist tend to be in museum collections or in private hands.

The well-preserved ones by exceptional artists can bring over $100,000 at auction.  Here are some of the pieces carved by Samuel Robb that can be seen on Artnet.

2 thoughts on “The Story of Cigar Store Indians”