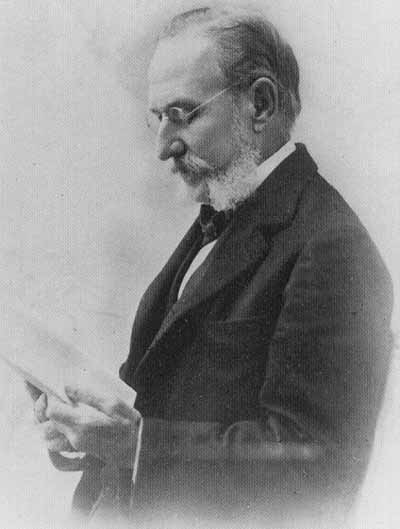 The cause of yellow fever was identified by Dr. Carlos Finlay (1833-1915), a Cuban physician who was instrumental in reducing the incidence of yellow fever in tropical climates throughout the world. In the United States, this was important in the southern states where the weather was often subtropical. The discovery was also crucial in Panama where the U.S. invested heavily to build a canal to reduce the shipping time of goods from the East to California and the West.

While many doctors were puzzling through the transmission of both malaria and yellow fever, Finlay came to the conclusion that neither illness could travel from human to human without a vector (carrier). Finlay identified that the mosquito was the carrier of both illnesses.

Finlay was born in 1833 in Puerto Principe (now Camagüey), Cuba. His mother was French and his father, a doctor, was Scottish. The couple relocated to Cuba and embraced the country as their own.

Finlay’s early education was in France. He then attended Jefferson

Medical College in Philadelphia for his advanced degree. In 1855 he returned to Havana to establish a medical practice. Finlay was known as a kindly man who would not turn away patients even when they could not pay.

Finlay was also a devoted medical researcher. Cuba often had outbreaks of yellow fever and malaria, and Finlay spent his spare time trying to find the cause. After much study, he determined that the common element in those who suffered from these viruses were mosquito bites which led him to surmise that the illnesses were carried by these insects. He even identified the genus, Aedes, as the specific carrier of yellow fever.

As early as 1871, Finlay was invited to the United States to present a medical paper on the subject, but to other doctors, this reasoning made no sense. Finlay continued on, however, maintaining his private practice and researching yellow fever. He eventually contributed at least 40 articles on the disease.

It wasn’t until the Americans arrived in Cuba to fight the Spanish-American War that the U.S. medical establishment decided to put some heft behind the need to better understand yellow fever. In 1901 the government asked Army surgeon Walter Reed (1851-

1902) to put together a commission to study the issue. Reed did so, including Finlay in the commission.  The entire group traveled to Cuba to better understand transmission of the illness.

Initially the commission discounted Finlay’s theory and focused on filth in hot, humid climates as the cause.  But none of their tests proved their theories. Finally the doctors turned to Finlay, and he

walked them through almost thirty years or research to demonstrate that the mosquito was the disease vector.

After undertaking their own study, the Reed Commission confirmed Finlay’s findings. (Walter Reed is sometimes given credit for this discovery, but all the initial work in the field was Finlay’s.) The next task was to apply them and reduce the mosquito population to halt spread of the disease.

Since the 1850s, America and parts of Europe had been interested in finding a faster trade route through Central America to avoid the long voyage by ship around Cape Horn. In 1881 the French had attempted to span Panama with a canal which would greatly speed the trip. They brought with them the experience of having built the Suez Canal, but they found the engineering challenges in Panama to be far greater than those they had addressed in Egypt.

However, it was tropical disease that ultimately halted progress. Both the French engineers and the local labor force suffered mightily from various tropical diseases, particularly yellow fever and malaria.  From 1881-1889 (the duration that France spent trying to build the canal), it is estimated that over 22,000 people died.  Finally the French abandoned their efforts.

The United States Takes Over

When the United States took over the Panama project (1901-1902), they were well aware that 22,000 people had died working on the canal in the 1880s, and that 12,000 people had died while working through the same terrain building the Panama Railway (1850s). But now the United States had knowledge on their side. The Reed Commission confirmed what Dr. Finlay had long been telling everyone—reduce the mosquito population to cut the incident rate of disease.

As a result, the first two-and-a-half years of the American canal

effort involved preparation and planning to make the land fit for human habitation.  U.S. Army physician Dr. William Gorgas (1854-1920) was brought in to implement a sanitation program, and a full-scale effort was made to eliminate as many mosquito breeding places as possible.

Swamps and wetlands around the Canal Zone were filled in, and Gorgas divided Panama into multiple districts so that inspectors could check regularly for stagnant water. In addition, he ordered that sleeping quarters be built with screens so that the workers were protected during the night when the mosquito population is most active.

He also experimented with fumigating buildings where people with yellow fever had been housed. Pans of sulfur or pyrethrum were placed in areas where yellow fever had taken root and the powder in the pans was set on fire. The smoke proved effective at reducing the mosquito population within buildings.

The final measure implemented under Dr. Gorgas involved quarantine of an individual if someone did become sick.  The patient was transported to screened structures that prevented future mosquito bites so that the disease could not be spread from an infected individual.

Gorgas’s work and Finlay’s knowledge made the building of the Panama Canal possible, which was to change the course of American transport and greatly speed access to the West.

Recognition of Finlay came late but his findings were celebrated in 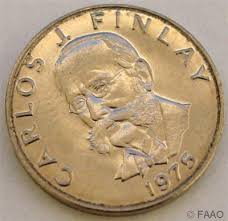 his lifetime.  Finlay was nominated seven times for the Nobel Prize in Physiology, though he never was awarded it. However in 1908 he received the Legion of Honour from France.

There is a memorial to him in Havana and a statue of him in Panama City near the canal, the canal he made possible.

But best of all was certainly the statement made by General Leonard Wood, the U.S. military governor of Cuba from 1898 to 1902: “The confirmation of Dr. Finlay’s doctrine is the greatest step forward made in medical science since Jenner’s discovery of the vaccination.”

Finlay concluded his career as the Chief Sanitary Officer of Cuba, a position he held for eight years before retiring in 1909.

4 thoughts on “Carlos Finlay: Cuban Physician Who Solved the Mystery of Yellow Fever And Made the Panama Canal Possible”