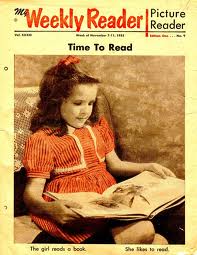 Several generations of Americans remember Weekly Reader as a source of news in the classroom.

The goal of the four- to eight-page weekly paper, which was distributed via the classroom, was to bring awareness to children of what was happening in the world, so that one day they might become daily newspaper readers.

Schools purchased the publication in bulk, and a nominal fee (about $2 in the 1950’s) was collected from parents to offset district charges. (Schools generally had money for those who could not afford it.)

The weekly was distributed on Friday afternoons, and must have offered a welcome relief to teachers who were ready for something to fill the final afternoon before the weekend.

The First Issue of Weekly Reader

The first issue, published September 21, 1928 and primarily aimed at fourth graders featured a lead story about the childhoods of two presidential candidates in the 1928 election: Al Smith and Herbert Hoover. The headline read: “Two Poor Boys Who Made Good Are Now Running for the Highest Office in the World!”  As the publication evolved, it came to include a lead story, a regular column 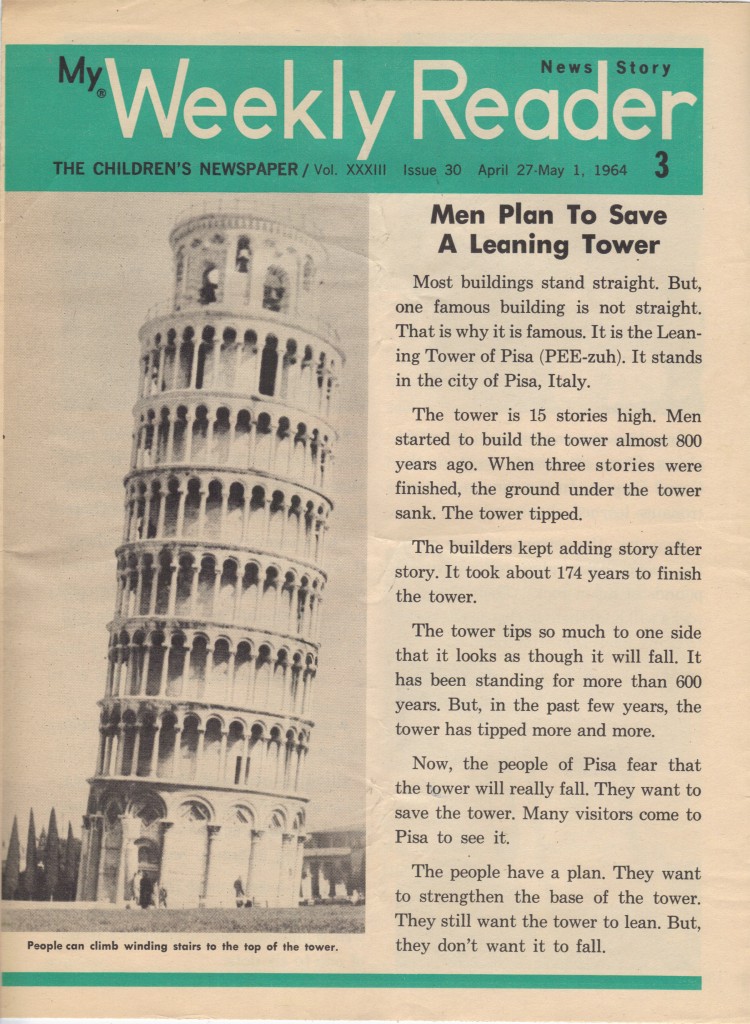 on innovations as well as photographs, cartoons, discussion questions, and puzzles and games that were tied into current events in some way.

The company knew it had a hit on its hands when the circulation of the publication reached 100,000 during the first year and grew to a high of 13 million in the late 1960’s and early 1970’s. It is estimated that two-thirds of American adults grew up reading My Weekly Reader.

The Idea for Weekly Reader

The idea of creating a newspaper for children has been largely attributed to Eleanor M. Johnson (1892-1987), who had been an educator in York, Pennsylvania, before taking over as long-time editor in 1934.

The start of the publication actually pre-dated Johnson’s participation. As early as 1902 the American Education Press existed and distributed a weekly newspaper for high school students called Current Events.

In 1928, a salesman, Harrison Sayre of Columbus, Ohio, suggested the idea of distributing a simple newsweekly for elementary school students. He was soon on board at American Education Press to develop the publication.  Sayre established himself as managing editor and hired Martha Fulton, a writer for children, to work as editor.  Fulton began with the first issue (September 21, 1928) and remained editor for several years. In later interviews, Sayre gives Fulton a great deal of credit for coming up with the right formula for the weekly.

Eleanor M. Johnson, was Director of Elementary Schools in York,

In 1934 she was hired to be editor-in-chief of My Weekly Reader. She served in that capacity until 1966. When she retired, she continued to work as a consultant to the company.

Weekly Reader was sometimes criticized for its narrow perspective on the world.  World War II was described to young readers as a time when “thousands of American men [in the Army] are learning to

cook and sew.” The publication also touted one of the benefits of war being the development of many inventions that were being created in response to the needs of the time (butter that would not spoil, dishes that did not break if dropped, etc.)

Later, the Civil Rights movement was all but ignored, and while the Korean War was written about to some extent, the Vietnam War was avoided.  Clearly, controversy was avoided.

The Los Angeles Times quoted from a speech given by Eleanor Johnson in 1942 where she described the publication’s philosophy: “…We promise to do our share in guarding America’s children from the hazards of fear, tensions, and frustration and to contribute to emotional stability through the inspiration and reassurance that the carefully selected current content of My Weekly Reader brings to children. Ours shall be a positive philosophy of optimism.”

By the end of the 1950’s, different versions of the weekly paper 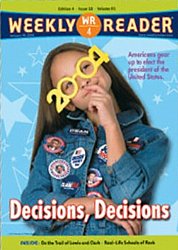 existed for children in first through sixth grades. There were also curriculum-specific magazines for middle and high school students, including areas such as health, science, careers, reading, and writing.

In 2007, Weekly Reader Corporation became part of The Readers Digest Association. That company tried to create a viable online version but was unsuccessful.  In February 2012, Weekly Reader was acquired by its competitor, Scholastic. The publications have joined forces and are now re-branded as Scholastic News/Weekly Reader.

If you would like to share your memories of Weekly Reader, I would be delighted. Please use the comments section.

84 thoughts on “Weekly Reader: An Important Part of Classrooms for Many Years”