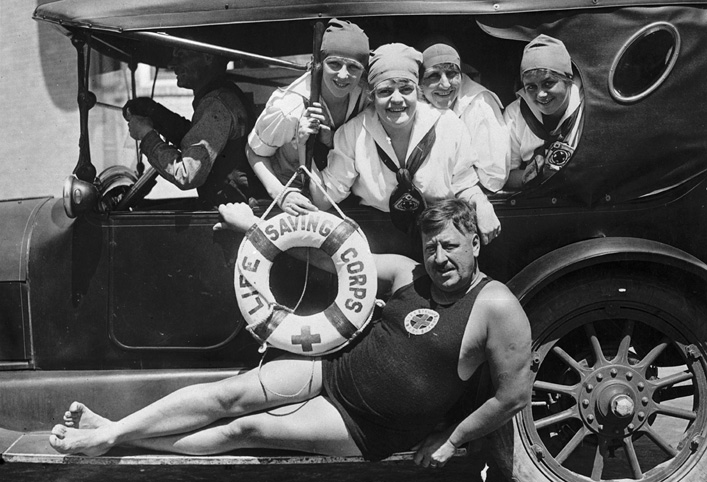 “Water is a good friend or a deadly enemy,” said Wilbert E. Longfellow (1882-1947), a man who invested most of his life in teaching Americans the importance of water safety.

His first job was as a reporter in Providence where he wrote story after story about drowning victims along the waterfront of the Rhode Island city.

During his after-hours, Longfellow donated his time to water safety education. As a result, he was hired as the national field representative for the American Red Cross. He spent almost 40 years working for them, spreading information about the fun of swimming and the importance of safety in, on, and around water.

Though Longfellow was perhaps the most visible national figure talking about the subject, he was not the first to recognize the need for water education. That movement originated in New York.

The Importance of Water Safety Increases

Awareness of the importance of water safety grew during the late 19th century as more people moved into cities. Newspaper articles reported almost daily about boating or ferry accidents that often resulted in drownings. Life preservers and life boats were rare, so drowning numbers were high.

Children were largely unsupervised in this era, and a good number fell off docks and drowned. Few families had leisure for water sports, and most people had no idea how to swim.

If women on a ferry or in a boat went overboard, they were doubly hampered by their clothing. Voluminous skirts of the day were heavy, and the fabric tended to float upward, covering a woman’s face and arms. This made it even more difficult for a victim to survive.

As the population of New York grew, the city reported about 450 drowning deaths per year.

William O’Neill, known as Nan the Newsboy, was perhaps an unlikely hero for launching a volunteer water rescue group. In addition to hawking newspapers, he polished men’s boots along the waterfront. He was troubled by the number of water-related tragedies he witnessed along the docks of Manhattan.

In 1878, Nan encouraged a couple of friends to join him in what he called the Volunteer Life Saving Corps. (Firefighting units began in this same way in the 1700s.) When they had time, the young men patrolled the waterfront along the lower eastside.  Their only equipment was a rope to help retrieve a person.

Nan’s group also used somewhat unusual rescue methods. Their victims often panicked and fought back against the rescuer. Nan’s solution was to subdue them by punching them in the face. Then they could be towed in.

Children were also problematic. They generally grabbed the rescuer by the neck, sometimes cutting off air or pulling the man down. But since they were smaller, the children were easier to put under one’s arm and swim to shore with them.

In the meantime, other volunteer groups formed. Several of the rescue groups were happy to include women, unique for the time. 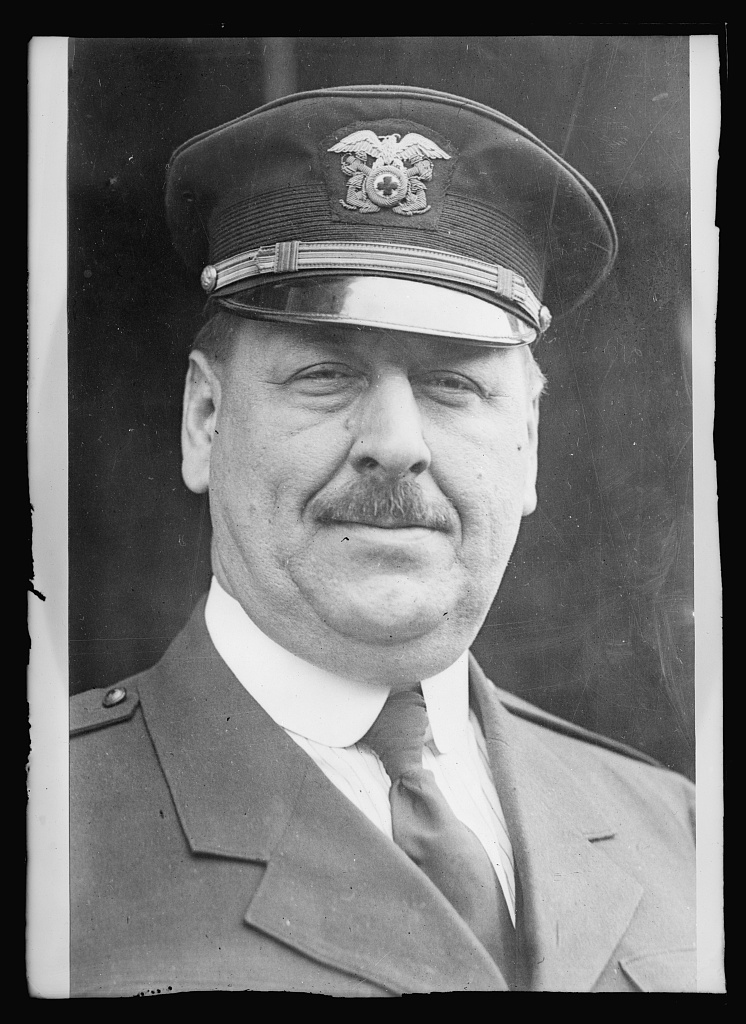 In Rhode Island, Wilbert E. Longfellow maintained his job as a reporter, and continued to teach about water safety. He realized a major problem was that people lacked access to bodies of water for recreation. Some of his early newspaper stories focused on the need for clean swimming sites in the community so that people could become comfortable around water and learn to swim.

He also convinced the newspaper to sponsor an essay contest about why few girls were taught to swim. This brought attention to the gender difference in the sport.

Then in 1904 in New York, a sidewheel paddle boat, The General Slocum, was carrying more than 1300 people on a church outing. The boat was making its way up the East River near Manhattan when it caught fire. It burned quickly, causing massive panic on board and pitching old and young into the water. One thousand thirty-seven people died in the tragedy.

Longfellow was deeply distressed by the New York tragedy. In Providence, he knew his next step needed to be gaining access to water facilities for more members of the public. He soon made deals with local facilities who agreed to provide blocks of time for 200-300 children to come each day for swimming instruction.

When someone asked him why he did what he did, Longfellow answered: “Every man needs a hobby. Mine is Live People! I don’t like to see dead ones—particularly drowned ones. Let’s keep more of them alive.” 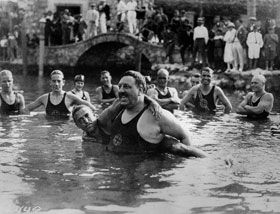 From New York, the U.S. Volunteer Life Saving Corps (a more advanced version of the group begun by Nan the Newsboy) sent representatives to each state to encourage them to form similar rescue groups.

In Rhode Island, the group connected with Longfellow. He greeted them warmly and welcomed the written material they provided. They also encouraged him to learn rescue techniques himself so that he could start teaching others.

Longfellow was effective. By 1909, the statistics on drowning victims in Rhode Island decreased by 50 percent.

Impressed by these numbers, the New York chapter of the U.S. Volunteer Life Saving Corps hired Longfellow. He moved to New York and was given the designation of General Superintendent and Commodore-in-Chief of the USVLSC in New York.

Longfellow realized one challenge was standardizing rescue methods. (No more punching in the nose!) He organized training for the YMCA and YWCA and also worked with the Boy Scouts, an organization he supported from the beginning. He saw that his work needed to be expanded throughout the country, but those who hired him wanted him to focus only on New York. 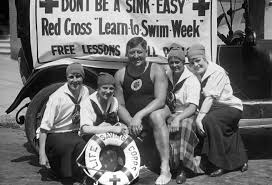 Despite this, Longfellow continued to talk about his many plans to spread water safety messages nationally.

In 1914, the American Red Cross decided to take the lead in water safety, and they knew that Longfellow was their man. They hired him as their national representative to devote himself fully to matters concerning water safety.

For the next 43 years, Longfellow did everything he could to teach water safety to Americans. His enthusiasm, knowledge, teaching skills, and showmanship made him a natural leader.

Longfellow developed a four-pronged method to use in each community:

Above all, Longfellow believed being in the water was fun and refreshing. In his teachings, he stressed: “Water is a good friend or a deadly enemy. After you have been properly introduced to it, keep on good terms with it. Don’t slap it; try pulling—an arm full at a time.”

He also always told his instructors: “Entertain the public hugely while educating them gently.”

Early in his career, Longfellow learned it was important to ease fears and create fun. One of his teaching methods involved story-telling about great swimmers and their daring rescues. He then asked children in his classes to act out the stories he told. Of course, everyone in the story was always saved.

Longfellow also created water pageants, often involving costumes. Many of the stories were fantasy tales he wrote, like “Showing Father Neptune.” (Longfellow’s large frame made him the perfect person to play Neptune.) The content of other stories can be guessed at by their titles: “The Princess Learns to Swim,” “A Water Circus,” “A Night in Hawaii,” “The Guardian of the Beach,” and “The Downfall of Davy Jones.” 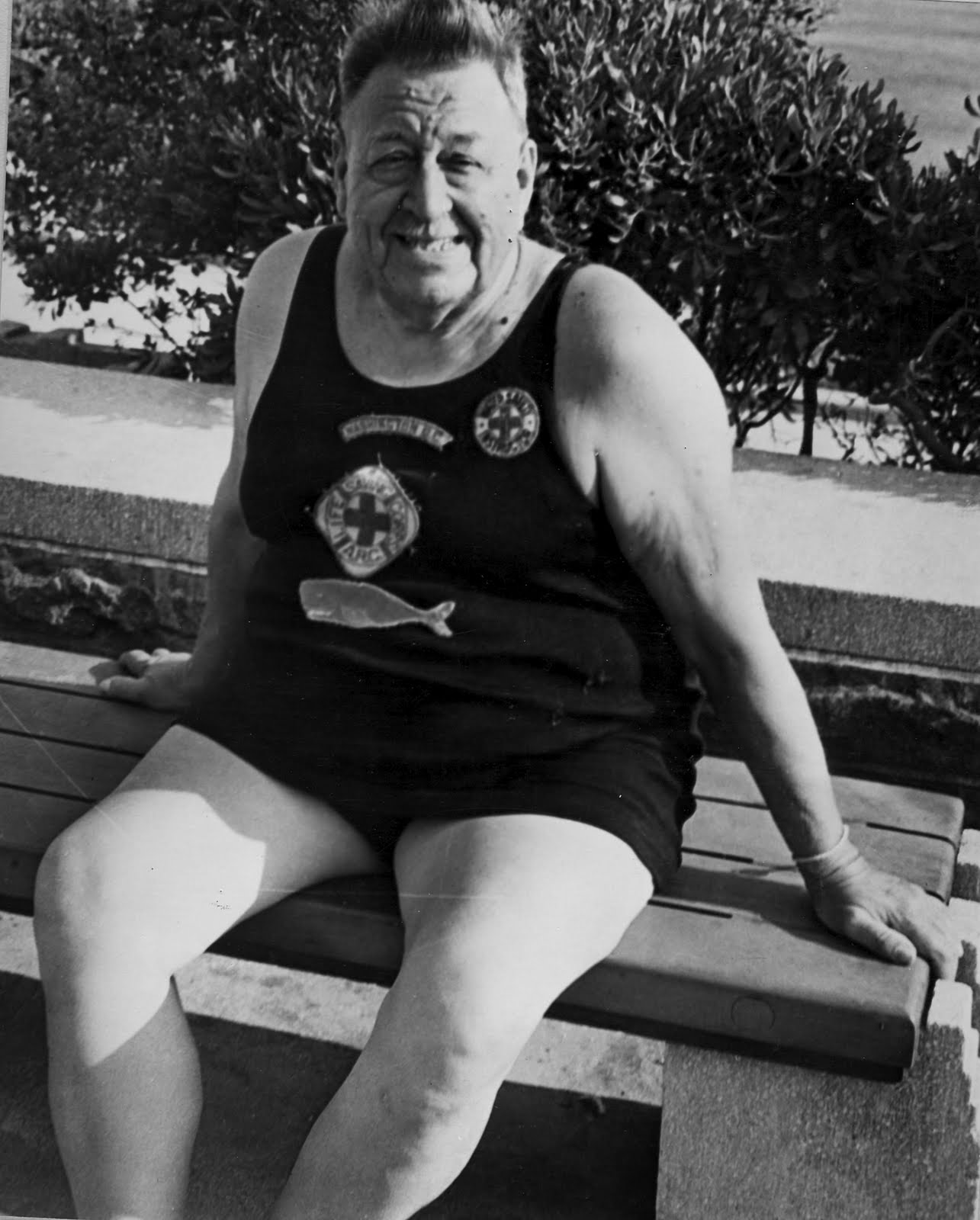 He also loved to set up diving demonstrations (using both men and women) and to create races and contests. The most notable race may have been the Hurry-Scurry Race held in Boston. The competition began with the swimmers in bungalows changing into their suits. Then they ran down the beach, dove in the water, and swam to a raft where they had to put on a costume that was laid out for them. They then swam back to shore where they could be declared winner only after consuming a piece of pie.

Throughout this time, America experienced a tremendous upsurge in the  popularity of aquatic recreation. Many enjoyed swimming but there were also boat and fishing enthusiasts.

The Red Cross wanted his message to live on and later they created WHALE tales (Water Habits Are Learned Early) to stress the importance of children learning water safety.  In memory of Longfellow (some called him their “amiable whale”), a blue whale became the symbol of the program.

Water safety is important for people of all backgrounds and ages. To help children with special needs, www.safety.com has put together a special guide: Water Safety Guide for Children with Special Needs. Very helpful!

For another story about safety, see Duck and Cover.

Fighting the Current: The Rise of American Women’s Swimming 1870-1926, by Lisa Bier, Google Books. Helpful information about the history of water rescues.

“Wilbert E. Longfellow: The Hobby That Became a Life Work,” produced by the American Red Cross.

“Commodore Wilbert E. Longfellow and Red Cross Swimming Instructors on Tour in the 1920s.” from the Historical Collections at the Claude Moore Health Sciences Library.