One doesn’t often luck into a story about Frank Lloyd Wright that provides not one but two dog stories, but when a long-time reader told me she favored dachshunds and Jack Russell terriers, I started hunting.  My search led me to none other than one of America’s most famous architects, Frank Lloyd Wright (1867-1959).

It turns out that Fallingwater, a house completed by Wright in 1938 that was voted “best all-time work of American architecture” by the American Institute of Architects, was home to at least six long-haired dachshunds as well as several litters of puppies that came along.

The house itself was commissioned by the wealthy department store Kaufmann family of Pittsburgh, and they asked Wright to build for them a house that let the family enjoy the beautiful setting.  The house was to be located within the lush, wooded Bear Run Nature Reserve in western Pennsylvania and the design challenge was to capture the beauty of the sandstone rocks and the nearby waterfall.

Wright most definitely succeeded.  In A History of Architecture, Spiro Kostof writes: [Wright] sends out free-floating platforms audaciously over a small waterfall and anchors them in the natural rock.” In addition, the house was voted the most important building of the 20th century.

As for the dogs, they were very much loved.  In her book, The Fallingwater Cookbook, Suzanne Martinson recounts memories and recipes from the Kaufmanns’ cook, Elsie Henderson. 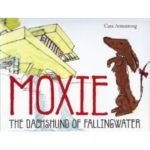 Henderson notes that Liliane Kaufmann’s dogs ate meat, and only the best meat.  The deliveryman bragged that he delivered meat for the Kaufmanns (in the 1950s), not realizing it was for the dachshunds.

“I was told that during the war years someone told Mrs. Kaufmann it was sinful to feed the dogs Grade A meat when most people were rationed,” Elsie remembers.  Liliane replied, “… My dogs didn’t start the war!”

On weekends, Elsie prepared bacon and eggs for the dogs’ breakfast.  She’d fry a pound and a half of bacon until it was dry, and then scramble a dozen eggs.  “I crumbled the bacon up in them.  The plates went up to Mrs. Kaufmann’s room, so she could watch them eat.”  On Friday nights, the dogs dined on whitefish poached in milk.

In 1963 Edgar Kaufmann Jr. entrusted the house and 1543 acres surrounding it to the Western Pennsylvania Conservancy. Since 1964 the house has been open to the public as a museum and more than 4.5 million visitors have come to tour it.

The children’s story of Moxie and the other dachshunds that made their home with the Kaufmanns at Fallingwater is told by Cara Armstrong, the education curator at Fallingwater.  All proceeds on book sales go to benefit Fallingwater.

Though the stars of the story are definitely the dachshunds, the show is temporarily stolen by a visiting German shepherd who belonged to artist and frequent guest Peter Blume.  (Blume painted Fallingwater several times, complete with depictions of a dachshund or two.)

It seems that Blume’s puppy arrived at the house for a party, and the dog noted that a stream flowed conveniently below one of the terraces.  The puppy was said to “cannonball” off the terrace, landing safely in the water below.  And of course, he popped out of the water, ran up the stairs, and shook himself dry– all over the other guests.

A Doghouse by Frank Lloyd Wright

While looking for more information about Wright and these dachshunds, I came upon a story about the one and only time Frank Lloyd Wright designed a doghouse.

In the early 1950s, Wright designed a home for the Berger family of San Anselmo, California.  When the family moved in, the 12-year-old son wrote to Wright requesting a doghouse: “I

would appreciate it if you would design me a doghouse which would be easy to build but would go with our house.”

The young boy described the size of the black Labrador for whom the house was to be built.  Eddie, the dog, was 2.5 feet high and 3 feet long.  Young Berger also offered to pay for the plans with money earned from his newspaper route.

Wright wrote back that he was too busy to do the project at the time (he was working on plans for the Guggenheim) but that Jim should write to him again in November.  On the first of that month, Jim followed up, and Wright did as he said; he sent Jim Berger designs for a doghouse—at no charge. The house was designed as a sharp, triangular look with a sloped shingled roof. (In 2019, I heard from Martin Longseth, who grew up on Frank Lloyd Wright’s property in Wisconsin, Taliesin. FLW got his inspiration for the doghouse from one built by Longseth when he was just 10. Here’s the story.)

It took a few years before the doghouse was built, and by then Eddie, the Lab, had passed away but there was a new dog in the family for whom the house could be used.  After the children grew up, the doghouse was no longer needed and someone took it apart.

Then a documentary producer, Michael Miner, started asking questions. Miner was preparing a film featuring Wright’s structures that were built in California.  He heard about the doghouse and located a now-adult Jim Berger, who had become a professional cabinet-maker.

Berger agreed to re-make the doghouse for Miner so it could be in the film.  Despite his years in the profession, he said the doghouse was a nightmare to build (other builders of Wright’s homes might like to compare their experiences with Berger’s—Wright’s structures don’t look simple to build.)  To see a trailer of this movie, Romanza, click here.

At any rate, Berger and his brother built the triangular doghouse with the sloping roof, which Berger hopes will one day be in a museum.

Why?  Because his own dogs—three rescue beagles—much prefer staying in the “people house.”