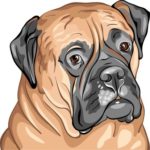 “Dogs cannot laugh, except with their tails; and their laugh is a laugh of joy.”  How can one resist a story that begins with that sentence?

The story appeared in The New York Times on November 16, 1875, reprinted from a December issue of the Galaxy, a magazine that also published Mark Twain in the 1870s.  It was noted that the story was told by Mr. Richard Grant White.

Mr. White’s story concerned a dog he once owned: “…a noble beast, large and beautiful. His sire was an English bloodhound, his dam a St. Bernard mastiff. …He was so big that he could stand on all fours and take a roll with his mouth from the dining-table, and that he could spring up, put his paws on my shoulders, and look me in the face.”

The dog was named Thor, and according to Mr. White, despite his size and power, he was totally bullied by a black-and-tan terrier named Puck that the family owned at the same time.   “But he loved Puck and would let the little rascal do almost what he liked; and when his teasing and impudence reached a point that was intolerable, the grand old fellow, instead of taking his tormentor by the back of the neck and quietly dropping him somewhere out of the way, would meekly come to me and put his great paw on my knee to get me to go out and set matters straight.”

One day Mr.  White took Thor with him on a walk where they would pass the gate of a farmer who had two large pointer-dogs who were “cross and quarrelsome with man and beast,” and were known to attack those who came to the gate.

On that day, Mr. White discovered that the dogs were outside the fence lying on the grass beside the road.  “At the sight of Thor they pricked up their ears, rose to their feet, and began to growl.  Thor, trotting on ahead of me, turned his head a moment, but kept on his trot.  As we drew near they [the two dogs] crouched together upon their bellies, and began to move thus toward the middle of the road; and when we were opposite their gate, with one yelping bark, they made a simultaneous rush upon the stranger [Thor].

“Oh, Thor, Thor, did the spirit of Shakespeare enter into thee, that without even turning thy head again thou heavedst up thy leg, like Crab’s dog, and served those dogs as he served the gentlewoman’s farthingale [the structure under a woman’ skirt in Shakespeare’s day], and then joggedst on as if nothing had happened, leaving them to sneak back to their lair with their tails between their legs, less in fear than in astonishment, and thy delighted master to cleave the sky with laughter?”

From the story to the style—delightful!