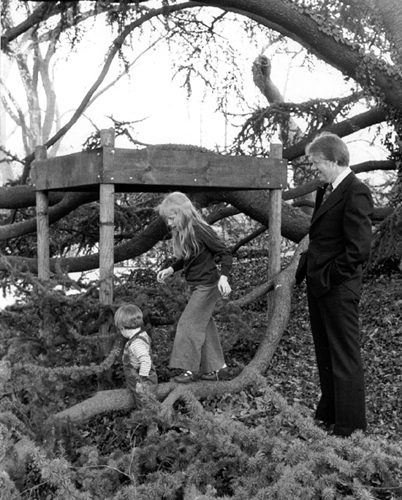 1977, Rosalyn and Jimmy made it clear that Amy, the youngest of their four children and the only one still officially living at home, was to have as normal a childhood as possible.  They selected a public school in the neighborhood for her—the Thaddeus Stevens School, and they did all they could to let her be a “regular child” despite living at 1600 Pennsylvania Avenue.

One of the items under discussion at the family dinner table must have been a tree house for Amy.  Soon there were press reports that Amy and her father were strolling the White House grounds looking for the proper site for her outdoor home. The importance of the right tree probably weighed more significantly than whether or not she would have a view of the Washington Monument. 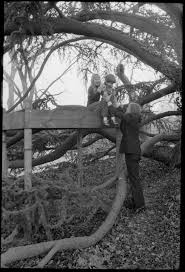 Reporters contacted the White House press office for information on who would be building the tree house.  The press office was noncommittal but pointed out that it would be “Carter typical” to form a new construction company of Carter & Carter, meaning that the President might be building it himself.  Later it was reported that a White House carpenter actually built the tree house, but there is little doubt that Amy and Jimmy put their heads together to plan it out.

The tree house that resulted was built on posts that rested on the ground rather than being fully braced on a branch of a tree. While technically some might not consider it a true tree house, chances are it did not make any difference to Amy and her friends.

A newspaper report stated that the “tree house-warming party” was held on a mild weekend night in March of 1977.  Amy invited two friends to come for a sleep over. The girls were wrapped in blankets and were said to have “gossiped and giggled,” eventually moving inside for the rest of the evening.  As long as they were outside, however, they had plenty of supervision.  Amy’s nursemaid, her new dog, Grits, and the Secret Service hovered beneath the new play

Later in the summer of 1977 the tree house was parlayed to offer the Carter administration a political edge on an issue going through Congress.  According to The New York Times (8-4-1977), President Carter called a Republican representative to thank him for the fellow’s support for Carter’s position that natural gas should not be deregulated.

The representative, who “preferred not to be identified” happened to mention that his daughter held Amy Carter in high regard.  President Carter responded as most dads would by saying that the two girls should get together to play.  Soon the Congressman’s daughter received a note from Amy suggesting the girl come to the White House where she could swim in the White House pool and see the new tree house.  A couple of days later the White House social office followed up with the young girl’s family to schedule the playdate.

Later in the year when the bill came up for a vote in the House of Representatives, the vote favored the Democrats who preferred not to deregulate natural gas at that time; it passed 227-199.

Adam Clymer, the New York Times reporter who filed the story, concluded his article with a remark from an oil lobbyist who favored deregulation.  He noted his side “needed a tree house.”

Amy was often photographed on her way up or down to the tree house. Her cousin, two-year-old Jason, who was the son of oldest Carter son, Jack, sometimes visited, and was a carefully-supervised guest in the tree house.

But when Amy was asked what her favorite activity was in her personal aerie, Amy responded, “Reading!”

1 thought on “Amy Carter and her Tree House: Growing Up in the White House”