During the Revolutionary War, there were numerous women who heroically stood up for the 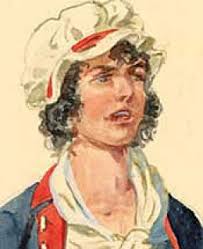 Patriots’ cause, yet so often the stories we hear take on the aspect of myth. Betsy Ross’ story is a good example.

Yet there are so many actions women took that were helpful to the cause.  Because of this, America Comes Alive presents to you three little-known stories of women who fought during our War of Independence. They, too, deserve celebration every July 4.

Margaret Corbin (1751-1800) was wounded while fighting at the Battle of Fort Washington, and she eventually became the first woman to ever receive a military pension from Congress.

During the Revolutionary War, George Washington planned that Fort Lee (on the New Jersey side of the Hudson) and Fort Washington (on the Manhattan side; a park between West 183rd and 185th Streets is where the fort was once located) were to be on guard to prevent the British from moving up the Hudson River. It was vital to hold both forts.

Under the command of Colonel Robert Magaw, Fort Washington found itself under vicious attack by Hessian soldiers on behalf of the British on November 16, 1776.

At that time, wives of the military often followed the camps where their husbands were placed, helping with cooking and laundry.  That’s how Margaret Corbin of Philadelphia found herself at Fort Washington that November.  When the attack began, Margaret fought alongside her husband, John Corbin of the First Company of the Pennsylvania Artillery.  She prepared and handed him ammunition for the cannon he was firing.  When he was fatally shot, Margaret saw no choice but to take over.  She fired the cannon until she herself was wounded.

Later that day Fort Washington was overpowered by the Hessians and most of the Patriots at the fort were taken as prisoners.  However, the custom of the time was to release wounded soldiers; Margaret was let go. Some of her comrades saw that she got across the Hudson to Fort Lee where she received medical care.  She survived but never fully recovered from her wounds.

On July 6, 1779, Congress granted her half the monthly pay of a soldier in the Continental Army and a new set of clothes or its equivalent in cash. With this act, Margaret Corbin became the first woman in the United States to receive a military pension from Congress. 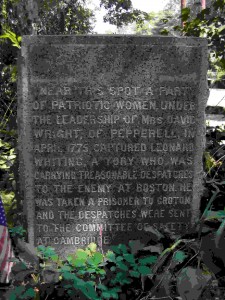 Prudence Wright (1740-1823) was living in Pepperell, Massachusetts with her husband when the Battles of Lexington and Concord occurred on April 19, 1775. The able-bodied men in town left immediately to participate in the fight.

A few days later with the men still away, word spread that British messengers were expected to come through the town, traveling from the north and carrying messages to the British commanders south of Pepperell.

From house to house, the word spread. The women were to dress in men’s clothing and meet at Jewett Bridge, the main access leading into the town from the north. They brought along any firearms left behind by the men and then buttressed their weapon supply with tools like pitchforks.

Once gathered, the group numbered 30-40 women, and they elected Prudence Wright to be the captain.  The group came to be known as Mrs. David Wright’s Guard.

Remaining on watch at the bridge, the women continued talking. They were nervously excited and had no idea what to expect. Would one messenger or ten be coming along this road?

As it happened, two Loyalists (those loyal to the British crown) came on horseback. They heard the women’s voices, and one who recognized Prudence’s voice turned and ran, but Captain Whiting kept moving forward. He assumed the women were no threat.

When the women realized the expected messenger had arrived, they surrounded him, seized his horse, and compelled him to dismount and submit to a search. In his boots were found treasonable papers. They then marched him in to the local tavern where they enjoyed a fine supper and guarded their prisoner until morning, at which time they delivered him into military custody at Groton. The papers they had found in his boot were sent to the committee of safety at Charlestown.

Southern Plantation Owner Willing to Sacrifice House for the Patriot Cause 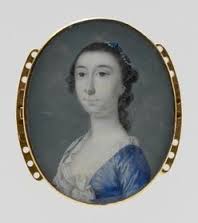 situated high above Charleston, South Carolina. It was the perfect location for a fort, so when the British took over the area in 1781, they promptly moved her out.

Motte did not take this well, personally or politically. She was a firm Patriot, and this was the second time one of her homes had been overrun by the British.

The Patriots approached her with their strategy that the only way to evict the British from this prime location was to fire on the home with the intent of burning it down.  Motte heartily approved the plan and provided them with the ammunition they needed to set the house on fire.

The plan worked.  The British fled and the Patriots moved in and were able to douse enough of the flames that much of the house survived.

Rebecca Motte celebrated the occasion by preparing a wonderful dinner for the Patriots as well as their British captives. She even spoke at the dinner about the importance of the cause, a very unusual occurrence for a woman of this time.

1 thought on “Revolutionary War: The Women Who Should be Remembered”