The comic strip, Little Orphan Annie, was created by a young 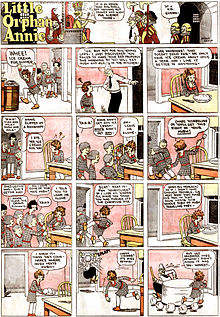 cartoonist by the name of Harold Gray (1894-1968). Gray’s parents both died before he had finished school, so he was independent and entirely self-made, qualities he imbued in Annie.

Gray’s first job was as a reporter at the Chicago Tribune; he left there to serve in the military during World War I. When he returned he wanted to pursue what he really loved—cartooning.  He was soon hired as an assistant to Sidney Smith, who created The Gumps, a comic strip about a middle class family.

How Little Orphan Annie Came About

As Harold Gray began to formulate ideas for his own strip, Gray decided to make his main character an orphan meaning that she did not have to worry about a hometown or family roots the way most people did, Gray also decided to draw the main character as a girl, feeling there were plenty of adventure strips featuring young boys.   He took the strip’s name from the 1885 poem “Little Orphant Annie” by James Whitcomb Riley.

The strip first appeared in The New York Daily News on August 5, 1924, and the early stories displayed Annie’s indomitable spirit. Gray frequently described Annie as “tougher than hell, with a heart of gold and a fast left, who can take of herself because she has to.”

From the beginning, Annie, always wearing a red dress, was generally accompanied by her loyal dog, Sandy.  Daddy Warbucks, dressed in a tuxedo with a diamond stick pin, figured prominently in the strip as her protector, but the Annie of the strip never makes a permanent home with him as she does in the musical version of the strip. She would stay in Warbucks’ home occasionally but then some sort of adventure always called her away.

Other regular characters included Punjab, an 8-foot native of India, and Asp. Both functioned as Warbucks’ and Annie’s helpmates.

By the late 1930s, the strip was exceedingly popular and spawned a long-running radio program as well as two early films.

During the 1920s, Annie focused on solving crimes and getting herself out of tricky situations using her good sense and gumption. She often had to step in to help Daddy Warbucks get out of a tight spot.

As the country dipped into the Depression in the 1930s, the strip became more political. Gray had always been very conservative. He staunchly supported big business and objected to labor unions, income taxes, and any sort of governmental interference in American life. Roosevelt’s New Deal program was frequently under attack in the strip, and Gray was beside himself when Roosevelt won a fourth term. 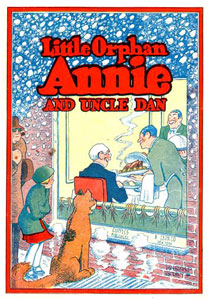 Gray was a strong supporter of the Allies during World War II.  In the strip Annie forms a group called the Junior Commandos to help with the war effort.  While Warbucks took on spy rings and Annie helped with other war-related adventures like foiling submarines, Colonel Annie still encouraged schoolchildren to become Junior Commandos, and this inspired action.  All over the country, Junior Commando groups were formed.

The War Production Board was also busy with their plans for a school-based Junior Army, but Gray’s creation of Junior Commandos certainly helped build enthusiasm for both programs.  Many of the groups organized by the War Production Board took the name, Junior Commandos, as that increased popularity. The young people spent afternoons combing their neighborhoods for scrap materials to turn in to the government, collecting bits of aluminum, rubber, nylon, kitchen fats, and paper.

While the program was considered a very successful domestic operation, the eventual conclusion was that what it did best was build morale.  Technology to convert scrap materials into useful products was very expensive at the time, so most scrap did not get used.  The one primary exception was the collection of kitchen fat.  The fats could be processed into glycerin, which could be used as a compound in medicines and some of it was converted into nitroglycerin for manufacturing explosives.

Gray, however, felt that his good deed in launching the Junior Commandos should earn him extra coupons for gasoline.  When his local ration board denied the request, the strip soon had a Local Ration Board headed by “Fred Flask” who got all the gas he needed for the three cars he drove around town. Angry readers wrote in to complain about Gray’s “whining” when they learned that the cartoonist expected to be an exception to the rationing rule.

After the war, Gray used the strip to politic during the Cold War, and Annie and Warbucks frequently hunted “commies.”

The Strip Continued after Gray’s Death

After Gray’s death in 1968, a few artists attempted to write and draw in his stead, but the public rebelled. For seven or eight years, the syndicate re-ran strips of the past.

Then in 1977, Annie was in the spotlight again with the mounting of a Broadway musical. This gave rise to the Columbia Pictures film of 1982, and Annie’s national fame skyrocketed off the funny pages.  With this renewed interest in the strip, the syndicate recruited cartoonist Leonard Starr to draw the strip; he did so until his retirement in 2000. The strip ran for ten more years being drawn by two other cartoonists, but it was cancelled in 2010.

While Gray’s conservatism grated on many, at heart, he stood for moral rightness, independence, and he held eternal optimism for the fate of the country.