At the mention of “the RCA dog,” most of us instantly see the iconic image of the white-and-black dog with his head cocked, listening intently to a phonograph.

Though my series is generally dedicated to American dogs, we’re going to permit Nipper, a Brit, to make an appearance because he qualifies as “very well known by Americans.” As it happens, the trademark was listed as one of the Top 10 of Famous Brands of the 20th Century.

Nipper
Nipper (1884-1895) belonged to one of several brothers in the Barraud family of Liverpool. The dog was born in Bristol, where an older brother lived. When the fellow died unexpectedly, younger brother Francis Barraud (1856-1924), a struggling painter, took the dog home with him to Liverpool.

Nipper was probably a terrier mix. Some think he was a Jack Russell Terrier, but others feel that he was a Fox Terrier, a Rat Terrier, or a Pit Bull Terrier.

The name Nipper came about because of his tendency to bite the backs of visitors’ legs. This may have simply been a trait of his puppyhood.

Model for a Painting 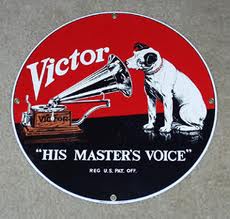 Though Nipper died in 1895, Barraud did not start this particular painting until 1898. He explained that the family had a phonograph, and Barraud decided to try to depict the puzzled look the dog had when the family phonograph played.

Barraud originally called his work, “Dog looking at and listening to a Phonograph.” It was not an instant success. Barraud approached the Royal Academy, hoping to have it displayed, but he was turned down. The painting was also rejected by several magazines.

Thinking commercially, Barraud wrote to the Edison Bell Company in New Jersey, noting that the dog was listening to an Edison Bell cylinder. “Dogs don’t listen to phonographs,” was the response from Edison Bell management.

Modifications Recommended
Friends liked the painting and suggested to Barraud that he might make it more appealing by substituting a gold horn to replace the black Edison horn. Barraud liked the idea but needed a gold horn from which to model the new version of the painting, so he visited Liverpool’s newly formed Gramophone Company.

At first the Gramophone Company used the image sparingly. Then Emile Berliner (1851-1928), the U.S. inventor of the gramophone, talked to Owen about assigning to him the U.S. rights to use the picture. Owen did so, and in the U.S. Berliner was working with the Victor Talking Machine Company, which made the Victrola. In 1929, the company became RCA-Victor (1929), and became well-known for radios as well as phonographs and records. For both Victrola and later for RCA-Victor, and eventually RCA Company, the Nipper trademark became well-known. Even today Nipper collectibles are very desirable.

Painting Re-Named
Today we know the painting by the perfect name, “His Master’s Voice.” Another writer, Erik Oestergaard, learned how the new name may have come about. He writes that in 2006 he heard from Heather Readman of Canada. Readman wrote that the Gramophone Company held a contest, soliciting slogans to go with the painting. Her great-grandfather William Graham, then living in Scotland, entered with “His Master’s Voice.” Unfortunately, he was never able to claim the prize; entrants were required to purchase a specific quantity of merchandise in order to win.

(Today this situation would have landed any company in an unpleasant law suit.)

Barraud and Nipper
Nipper was buried in Kingston upon Thames. This is now the parking lot of a Lloyds Bank on Clarence St. However, there is a plaque on the wall noting that Nipper is buried nearby.
While Barraud did not necessary strike it rich from the painting, he did spend most his remaining years working for the Gramophone Company, painting replicas of the painting to be used in different circumstances.

8 thoughts on “The RCA Dog, An American Icon”