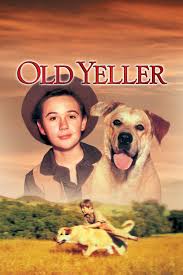 found in a shelter in Van Nuys, California.  The dog’s real name was Spike.

Spike almost didn’t get the part in the movie about Old Yeller because everyone thought he was too much of a sweetheart.

The Story of Old Yeller

The 1957 Walt Disney film, Old Yeller, was based on a book of the same name by Frank Gipson. The movie was about a boy and a stray dog in post-Civil War Texas. With the father away on a cattle drive, the two sons, Travis and Arliss, do the best they can to keep up with all the tasks on the family farm. 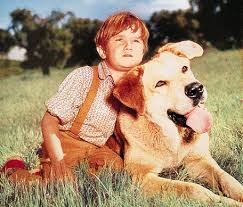 Meat is being stolen from their smokehouse and some animal has been disturbing the hens. The boys soon find that the culprit is a stray, yellow-colored dog. Travis, the older brother played by Tommy Kirk, tries to drive the dog off, but Arliss (Kevin Corcoran) protects the dog he calls Yeller.

One afternoon Arliss is trying to capture a black bear cub by offering it food.  As the cub comes closer and closer to Arliss, the little bear’s mother arrives, angry and determined to get her cub back.  Old Yeller appears unexpectedly and drives the bear away. By saving Arliss, the entire family embraces Yeller.

After this, Yeller remains on the farm, always ready to protect the boys. More trouble brews, however, when a neighbor stops by to report that animals are dying in the area from rabies.

One night a rabid wolf nears the house and attempts to attack the family. Yeller is there putting up a strong defense but the wolf keeps coming. Travis finally shoots at the wolf but before the wolf falls he lunges, biting Yeller.

The boys quarantine Old Yeller, hoping that he won’t become ill, but one day as they go out to take him dinner, and he has changed, snarling and growling at the boys. With that, Travis has no choice but to shoot him. It is one of the saddest moments in movie history.  (To see a trailer for a re-release of the movie, click here.) 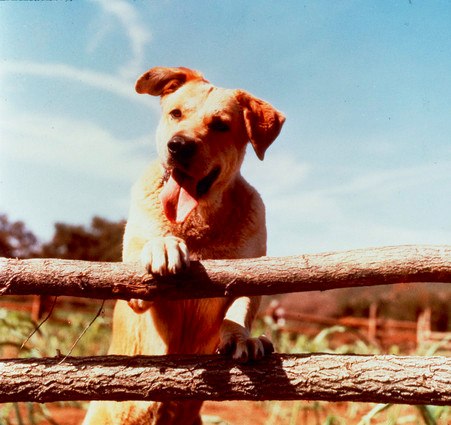 Hollywood dog trainer Frank Weatherwax (1902-1991). The Weatherwaxes were prominent animal trainers for the movie industry. One of their most successful lines of dogs played Lassie in all the various movies and TV shows starring Lassie.

Frank’s friend liked Spike’s look and called Frank to come down to the shelter. Frank did so and thought the dog seemed trainable. Frank paid $3 to bring him home with him.

The dog responded well to Frank, and soon he was looking like a dog with real potential. It just wasn’t clear how Spike was going to fit in to Hollywood. In the meantime, Spike was doing well in training, and otherwise enjoying the life of being among the Weatherwax family of dogs, complete with children to play with.

One day Frank Weatherwax’s wife, Connie, was reading The Saturday Evening Post when she came upon  serialized story called “Old Yeller” by Frank Gipson (it later became a book).  She loved the story, and the description of the dog made her think of Spike. 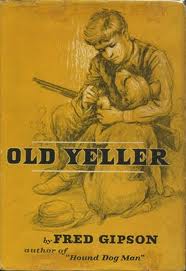 Later that year the Disney company announced that they had purchased movie rights to Old Yeller, and Frank Weatherwax made a call—he wanted to bring Spike in to audition for the role.

When Spike arrived at the studio, the Disney people saw a flop-eared, very friendly, goofy dog with huge feet…. How was this going to be the Protector Dog who saves the Texas family from all types of threats?  Spike had been raised around children and loved people of all ages.  The dog just didn’t look vicious.

That’s where the Weatherwax training was put to work.  Frank Weatherwax put Spike through his paces. Spike growled and snarled and was then able to revert to being his normal friendly self.

Spike soon had the part.

Though Spike was in several other films and appeared on television, he will always be remembered for his part in Old Yeller, one of the best boy-and-his-dog films as well as a film with one of the saddest endings.

Spike also appeared in other movies. He was in A Dog of Flanders, and The She-Creature as well as The Silent Call.  On television he made appearances on The Mickey Mouse Club and The Westerner with Brian Keith.

Spike spent his retirement years in the Weatherwax household where he lived for several more years after becoming famous.  He also had offspring that did well in show business.  His son was the dog in Island of the Blue Dolphins (1964) and his grandson appeared with Steve McQueen and Robert Preston in Junior Bonner (1972).

Additional information: Spike was originally owned by Frank Weatherwax. After the film was made, Frank’s nephew, Robert Weatherwax acquired the dog and gave him a great home.

23 thoughts on “Old Yeller Played by Spike, a Lab/Mastiff Mix”