1861 was the beloved pet of our 15th president, James Buchanan (1791-1868). The 170-pound dog, Lara, may have been the one bright spot for Buchanan during what became highly fraught years.

James Buchanan had served in Congress for many years but in the period prior to his election he had accepted an overseas post in Great Britain. Being out of the country during a time when the country’s discussions over slavery (Kansas-Nebraska Act) were heating up may have been the key to his being elected.

Lara had become part of the family before the election so it was guaranteed that she would become a resident of the White House when Buchanan took office.

In 1848 Buchanan purchased Wheatland, a large Federal style house with 22 acres of land near Lancaster, Pennsylvania.

Buchanan was engaged to a young woman, and when she died before their wedding day, Buchanan was heartbroken. Buchanan vowed to remain single the rest of his life. (Thus far, he is our only bachelor president). 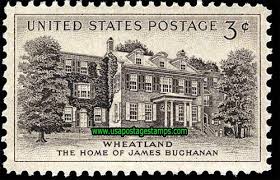 Nonetheless, Buchanan did move to Wheatland with family members:  A niece and nephew had been orphaned at a young age, and so Harriet Lane and her brother lived at Wheatland with Buchanan. They stayed on when Buchanan accepted an overseas post in the early 1850s.

When he received the Democratic nomination to run for president on the Democratic slate, Buchanan returned to the United States.  He ran a “front porch campaign” from Wheatland, where the press became familiar and quite taken with Lara, the giant Newfie.

Introducing the Newfoundland to Americans

Because Newfoundlands were uncommon in the mid-19th century, and because inexpensive photography and reproduction had not yet been perfected, few Americans were familiar with Buchanan’s breed of dog.

The editors of at least one newspaper, Frank Leslie’s Illustrated Newspaper, realized that the public would be curious about the four-legged bearlike animal that would be moving into the White House, so along with the story of Buchanan’s inauguration, they also ran an illustration of Lara with the caption:  “Prominent also [on his estate] is Mr. Buchanan’s Newfoundland dog Lara; remarkable for his immense tail and his attachment to his master.”

Lara also had an idiosyncrasy that reporters often noted: She would lie motionless with one eye open and one eye closed, keeping tab on things.

Upon Buchanan’s election, plans were made for niece Harriet Lane to 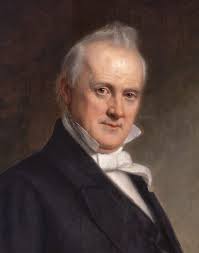 accompany President Buchanan and Lara in order to fulfill the responsibilities of the First Lady.

At his inauguration, Buchanan promised the nation that he would serve only one term.

His management of the presidency was rooted in his prediction that the courts would be able to settle the strife over sectionalism.  Two days after his inauguration, however, Supreme Court Justice Roger Taney released the decision on Dred Scott, asserting that Congress had no constitutional power to regulate slavery in the federal territories. Instead of settling anything, this just further enraged both sides.

President Buchanan tried to appease both the North and the South throughout his four years, but he merely managed to anger both sections of the country.  The Southern states began announcing their intention to secede.  Buchanan noted that secession was illegal, but he felt the law also prohibited going to war to stop secession.

By the end of his term, public opinion was against him, and the Democratic Party had split. His presidency is hard to view as anything but a disaster.

More Pets at the White House

While in the White House, Harriet and her uncle were to receive a few additional pets as presidents often do.  Harriet was given a small terrier by the British consul. The dog, named Punch, was described as so small that ‘it might be put under a quart bowl.”

The King of Siam also was said to have sent Buchanan a “herd of elephants,” which Buchanan wisely gave to the zoo. (During the Civil War, the King of Siam offered to send more elephants so that there would be enough to “populate all of America.”  President Lincoln noted that with the state of the country [at war], this was not a good time to accept such a gracious gift. (New York Times, 2-27-1862)

Friends were said to have given Buchanan a pair of eagles to keep him company. Buchanan kept them but made the decision to send the raptor pair to live at Wheatland.

While Buchanan must have been distressed about the state in which he left the country in 1861, he did not seem to have any solutions. Personally he must have been very happy to return to Wheatland with Lara where he lived out his years, dying at Wheatland in 1868.