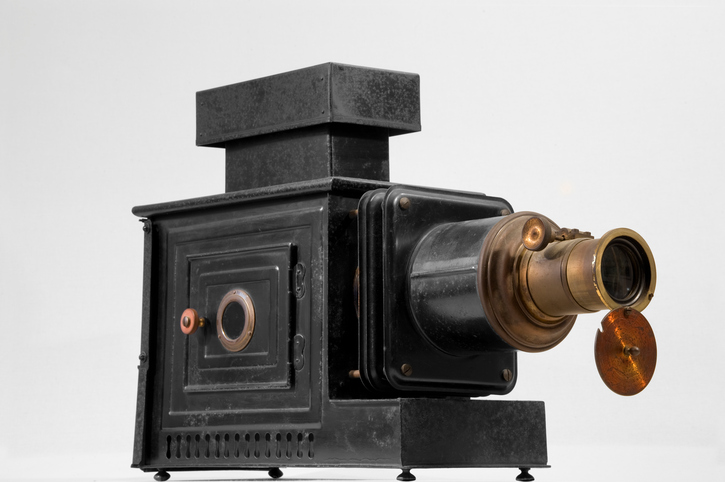 The magic lantern is a very old invention that served as a primitive slide projector. As improvements were made, the magic lantern eventually produced moving pictures as well.

The device was created in Europe during the 1600s and introduced in America during colonial times. The first documented use of a magic lantern in the colonies was in 1743 in Salem, Massachusetts.

The magic lantern went through various updates and improvements and remained in popular use up until the early 1950s when it was replaced by the electric slide projector.

What a Magic Lantern Is

A magic lantern is a simple form of image projector that requires a light source, a concave mirror to help intensify and focus the light, and a lens to project a painted picture from a glass slide onto a wall or projection screen. 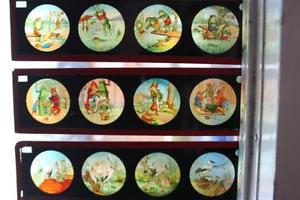 The slides created for the lanterns were hand-painted images on glass. Initially only black paint was used but artists quickly learned the merits of bright, rich colors. At first, one image was shown at a time, but it didn’t take long for users to realize that images presented in quick sequence could make a projected picture appear to be moving.  (Think of the illusion of animation achieved when you thumb through a flip book sold in gift stores today.)

The first lanterns used candle light. The flames were small so the images were pale. Even in a darkened room the projected pictures were visible to only a few people.

Lantern users were determined to create more powerful lighting. One advance—the use of limelight—was quite remarkable. By heating a cylinder filled with quicklime (calcium oxide), a bright white light was created. To heat quicklime, however, required heating a gas mixture to a high temperature. The process was dangerous, so it could only be done under carefully controlled circumstances. 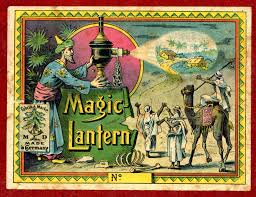 The illumination was magnificent, however, and showmen began using limelight to project images for small audiences. As they mastered the lighting technique, the audience size grew to be as many as a thousand people.

By the mid-19th century, kerosene was being used for magic lanterns in smaller venues. Kerosene oil did not give off the brightness of limelight but was safer to use. What was lost on size of audiences, however, was gained in the number of people who could use a magic lantern. The instrument began to be used by churches and schools and by various performers. Eventually small magic lanterns were even created for children.

Uses of the Magic Lantern 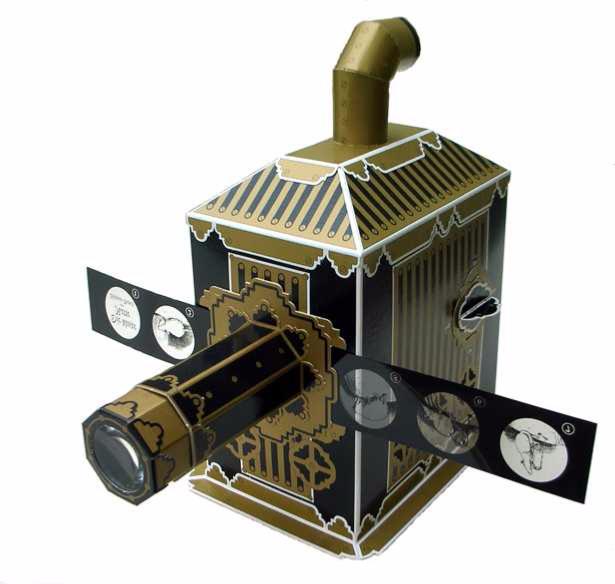 Because a Dutch scientist (Christiaan Huygens) is thought to have been the inventor of what became the magic lantern, one must assume that the original purpose of the device was educational. But given the possibilities of showing images and telling stories, it’s no wonder that the lantern was quickly adapted for entertainment. (The fact that it was called a “magic” lantern certainly alludes to the fact that it was something special and enjoyable.)

The early slides were all hand-painted by individual artists, but over time, companies came up with ways to speed the process. When slides were easier to reproduce, an increasing number of lanterns were put into use. In Europe and the United States, “traveling lanternists” went from town to town to entertain. Many of these men probably sold products as well.

The 19th century fascination with ethereal beings meant that during that time, the lantern could be used as a way to depict ghosts. Users soon found that by slowly moving the slides quite an eerie scene could result.

Early movement of the projected images was created by “slipping slides.” The artist painted several pictures along a thin length of glass. Then the lanternists could pull the glass slowly past the opening to create movement. For a humorous take, the slide could be moved back and forth repeatedly. A person’s eyes could appear to pop back and forth, or a fish could leap out of the water again and again.

Another advance involved layering images on top of each other. One company created “biunials” (a double projector—one on top of the other). A competitor came up with a “triunial” that offered three opportunities to overlay images.

With those changes came more ways to create movement. With a biunial or triunial, one image could remain stationary while the other slide was put in motion by hand or by a simple mechanism. Slides were soon painted on discs that could be spun around, giving the illusion of continuous movement.

On the video embedded, you can see a mouse climbing up the covers on a bed until he is close enough to jump into the man’s mouth—at which point the sleeping man’s mouth can be shown to open and close. 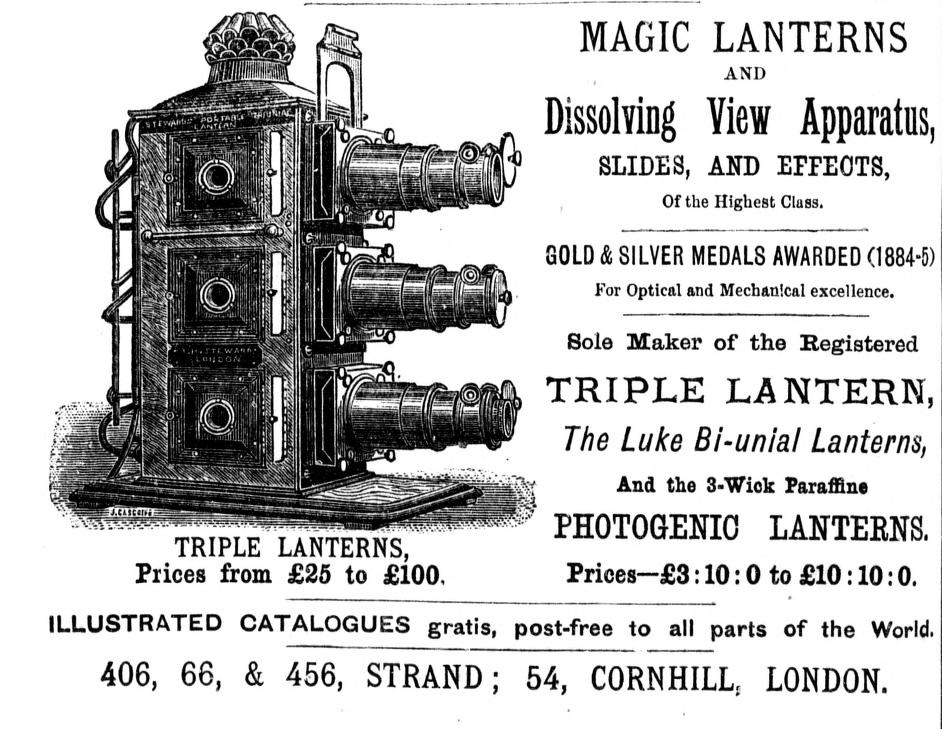 Another technique  involved dissolving one image into another. This required artistry in terms of lowering the light in one lantern while bringing up the light in another.

Electric light bulbs were a big advance in creating a strong light for the lanterns, but it changed the artistry. At first, the electric light was either on or off. It took time to learn to manipulate electricity in the same way that lanternists could with flame. 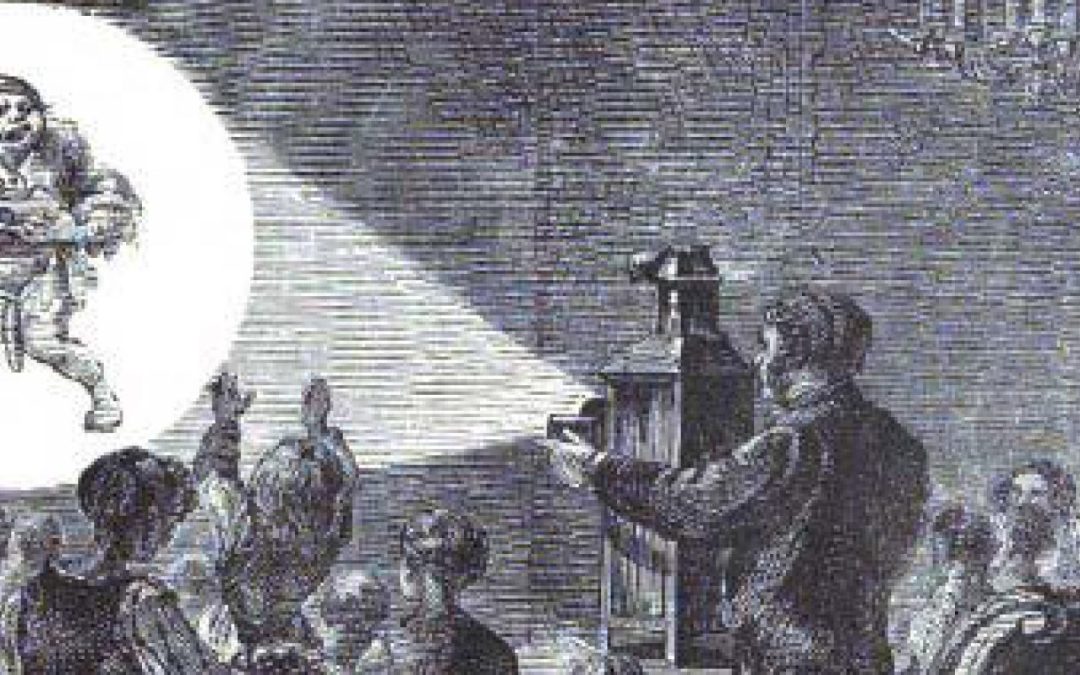 Chromatropes were also popular. They were made with two painted glass discs that rotated in opposite directions, creating those mesmerizing spinning circles that seem to move in and out.

Magic lanterns were truly remarkable inventions that were used for a very long time. Considering their longevity (about 300 years), it’s amazing that so few know of them today.

To read about another movie-related invention, read about Drive-In Movie Theaters.

1 thought on “The Magic Lantern-Early Form of Slide Projector”