The All American Red Heads, a women’s professional basketball team, were the female equivalent of the all-male Harlem Globetrotters; Like the Globetrotters, they were stellar at the game of basketball but also delightfully pleasing entertainers.

The team was the brainchild of C.M. Olson of Cassville, Missouri. Olson was a former player and coach who started a barnstorming business, sending men’s basketball teams across the country to play against local teams. Beginning in the 1920s, Olson’s men’s teams–the Terrible Swedes and the Famous Giants—traveled to small towns, drawing big crowds for the match-up against the local team.  Most of the town would turn out for the event. Then the barnstormers would move on to the next location.

Olson’s wife, Doyle, owned five beauty parlors in Arkansas and Missouri. With the success of the men’s traveling teams, the couple decided that a female team could make good business sense. In 1936 Olson recruited seven female players from basketball teams that were part of the American Athletic Union. The women were great players. One of them was 6-feet tall, and two of the seven women had red hair, which must have sparked the idea for the team name. (After the first few years, Olson or team members must have turned to dye or henna treatments as later descriptions of the team noted they were all red heads.)

Since women’s teams were hard to find, Olson’s plans for the Red Heads pitted them against local men’s teams.  For that reason, they played according to the rules of men’s basketball.

Red Heads On the Road

The first year the team played 133 games in six months, traveling to nearly 30 states.  After that, bookings were no problem. Olson was besieged with requests for the Red Heads.

The women were more than great athletes—they were great performers.  The Life reporter described their “circus like shooting” and “rough style.”

Over time, the women perfected a system. They started the game strong to get ahead. Then they eased off a bit to do more trick shots and fancy dribbling.  Flirting with the opposing team, with the referees, and with the audience was part of their routine.  Toward the end of the game, they reapplied pressure to bring in a win.  The system was entertaining and very successful. They won more games than they lost, with a 70 percent win rate for most years.

From the photographs, the first uniforms were navy. They wore very short shorts and short-sleeved shirts.

Off court, the women who signed on to play for the Red Heads also agreed to a strict policy of good behavior. Olson knew that image was vital to their success, so their rules included no smoking or drinking.

In 1948, Olson sold the All American Red Heads to Orwell Moore, a basketball coach whose wife played on the team for a time.  The team was so successful that Moore hired a second team of Red Heads to travel. From 1964-1971, Moore had three “Red Heads” teams touring during the season.

In the 1950s, a young man named Sam Toperoff was on a men’s basketball team in the Army, and the team was scheduled to play against the Red Heads. Toperoff later wrote for The New York Times. In 1989 the newspaper published a reminiscence he wrote about this game. It gives a great feeling for the style of the Red Heads.

By this time, the uniforms of the Red Heads altered from the original. Toperoff describes the women wearing “skating-style skirts” that were very short, midriff blouses, knee highs, and red sneakers (The New York Times, 6-11-89)

Toperoff’s position on the Army team was that of guard. Just before the game, he was approached by the opposing guard. The Red Head introduced herself as Zethel, winked at him, and then partly shook/partly held his hand.

She kept a running patter with him throughout the game, and at one point explained to him a set play the Red Heads hoped to carry out. She asked him to please cooperate and let her carry through with her trick play. Toperoff didn’t want to look foolish to his own team so he ignored her and foiled Zethel’s  trick shot.

Clearly this was part of her plan.  She then made another request for him to let her play through. Again, Toperoff was determined to block her. Zethel expected this and and veered in the other direction. Toperoff tried to respond, lost his balance and fell.  By this time, Zethel’s fancy shot was well on its way into the basket. She turned, offering Toperoff a hand to help him up. He instinctively accepted the help, and once he was up she patted him on the butt.  The crowd went wild. 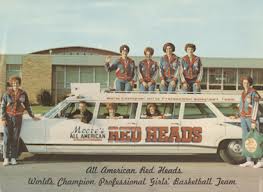 The Red Heads were pulled from obscurity by a lucky find by a grandson of a former team member.  One day when looking around his grandmother’s attic in Glastonbury, Connecticut, John Molina found an old photograph of his grandmother, Bernice Gondek Molina, with some of her fellow teammates from 1934. This photo was for an amateur league they played in, representing a local soap factory.

This find led Molina on a hunt for more information. His grandmother had passed away so there was no opportunity to ask about her experiences but he began to track her basketball-playing history. That’s how he came upon the Red Heads. From there, he tracked down everything he could find about this team that had been quite a phenomenon for fifty years (1936-1986).

Over time, he got to know the second owner of the Red Heads, Orwell Moore. Moore realized that Molina was his hope that the collection might live on and be appreciated. Moore gave what he had on the team to  Molina, who now has the largest collection in existence of team memorabilia.

Molina  has just completed a book on the early days of women’s basketball.  The book is filled with photographs and great stories: Barnstorming America: Stories from the Pioneers of Women’s Basketball.

Women’s basketball is one of the few sports that developed about the same time as the men’s sport did.  The game began at women’s colleges and spread from there.  The first game is said to have taken place at Smith College in 1892 where an instructor, Senda Berenson, taught basketball to the women, hoping it would improve their physical health.  As developed at the college level, the rules were modified so women “did not have to over-exert.”

The fact that the Red Heads played the men’s game with the men’s rules makes them even more remarkable. John Molina says it best: The Red Heads dribbled, juggled, danced, and laughed their way into the hearts of audiences.”

Much of the research for this article came from John A. Molina who was in the process of writing his book, Barnstorming America: Stories from the Pioneers of Women’s Basketball, published by Acclaim Press, 2016.