Sarah Winnemucca was born near Humboldt Lake in western Nevada, the daughter of Chief Winnemucca and his wife, Tuboitonie.  The family members were part of the Paiute People.  At the time, the Northern Paiutes and Washos Indians were the only inhabitants of western Nevada.

Sarah’s original name was Thocmetony, which means “shell flower.”  Girls in the Paiute tribe were usually named for flowers, and the Paiutes had a custom where in the spring the young girls would go together to see if their flower was yet in bloom.  (There is nothing to document when or why she was eventually called Sarah.)

Father and Grandfather Differed in Response to White Man

Sarah’s grandfather served as guide to John C. Frémont in Frémont’s survey and map-making expedition across the Great Basin to California in 1843-45.  Later Winnemucca fought beside the white men in the Mexican-American War, becoming friendly with many of them.

Sarah often traveled with her grandfather which introduced her to white ways.  When she was 13, she and her sister were placed in the home of a Major Ormsby and his family at Mormon Station (now Genoa, Nevada). She quickly learned English and Spanish, and added these skills to the three Indian dialects she already spoke.

Her own father resisted the white man, so this dichotomy must have heightened Sarah’s awareness of the differences between the cultures. 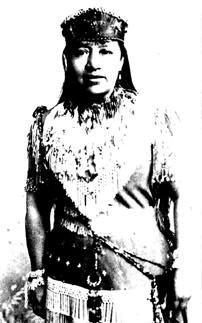 After the Mexican-American war, the Northern Paiute and Bannock people were placed on the Malheur Reservation by Executive Order of President Ulysses S. Grant. Sarah taught at a local school and also worked as interpreter for Samuel Parrish who was the Indian Agent assigned to their reservation at the time.

Unfortunately for the Native Americans, Parrish, who had been a decent agent, was replaced by William Rinehart who was disreputable.  He failed to pay  the Paiutes for work in the fields, and he made money on the side by selling supplies intended for the Indians to local white families who would give him cash.

By 1878 those placed on the Reservation left it, moving elsewhere and launching what was known as the Bannock War. In 1878 Sarah made a daring non-stop horseback ride of 233 miles from Idaho into Nevada and back to warn family members of the dangers that were coming with the War.

Sarah continued to work as translator for the U.S. Army and also carried messages between the Bannocks and the military.

The end of the fighting was not good news for Native Americans.  The government decided to move the Bannocks and the Northern Paiute further north to Yakima Reservation (Washington Territory). Conditions at Yakima were terrible.

Spoke Out for her People

Long before others had used passive resistance, Sarah instructed her people not to settle the land, not to farm or do anything that indicated that they accepted the government’s decision on their placement in Washington Territory.

Bur Sarah’s campaign for her people had begun as early as 1870 when she sought better treatment of Native Americans.  After citing the dire living conditions on reservations, Sarah’s letter to government representatives expressed further concerns:

“So far as living is concerned the Indians at the military posts get enough to eat and considerable cast-off clothing, but how long is it to continue? What is the object of the Government in regard to the Indians?  Is it enough that we are at peace? Remove all the Indians from the military posts, and place them on reservations such as the Truckee and Walker River, and it will require a greater military force stationed around to keep them in the limits [than]  it now does to keep them in subjection.”

Sarah was so outspoken that by 1879 Carl Schurz, the Secretary of the Interior, felt the solution was to send an emissary west to escort Sarah and her family to Washington.  She met with President Rutherford Hayes and other officials, including Schurz.

The Paiutes were very upset by the placement at Yakima and Sarah requested permission to return to the Malheur Reservation at their own expense. Permission was granted, and Sarah had time to share the good news with the Paiutes.

But then the government revoked the decision.

Because of the government’s change of sentiment, the tribes people felt Sarah had somehow betrayed them.

Sarah Took to the Lecture Circuit

Sarah felt her next step was to try to sway public opinion, so she started booking herself for lectures.   At each location, she would stride on stage in her red leggings and fringed Native 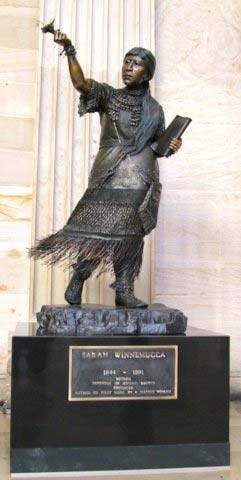 American clothing, and she was a powerful and charismatic presence, addressing audiences in English but utilizing her other languages when necessary.

While lecturing in San Francisco in 1982, she met and married the man who was to become her third husband (she had two other brief marriages).  Lewis H. Hopkins was an Indian Department employee, who believed in Sarah’s message and together the two set off the east coast to continue to tell Sarah’s tale.

Sarah gave nearly three hundred lectures in the northeast, and during this time she was befriended by  two sisters, Elizabeth Peabody and  Mary Peabody Mann, the wife of educator Horace Mann.  The two women became advocates for Sarah, and Mary Peabody Mann helped her turn her lectures into a book Life Among the Piutes: Their Wrongs and Claims.  The book was published in 1883. (It has been digitized and is available online.) Sarah used the lens of her own life to document the changing conditions  and poor plight of her people.

By the mid-1880s, Sarah and Lewis returned to Nevada to build a school for Indian children to promote the native language and lifestyle. The Peabody sisters must have helped fund Sarah’s efforts as the school, located in Lovelock, Nevada,  was called the Peabody Institute.

In 1887, however, the school was closed when the Dawes Severalty Act was passed. This required Indian children to attend English-speaking schools.

Toward the end of her life, Sarah felt betrayed that she had no home and family and that all her efforts had been for naught.  Writing in 1882 for The Californian magazine, Sarah wrote of her discouragement:

“Once the Indians possessed all this beautiful country; now they have none,” she wrote. “Then they lived happily and prayed to the Great Spirit. But the white man came, with his cursed whiskey and selfishness and greed, and drove out the poor Indian, because he was more numerous and better armed and had more knowledge. I see very well that all my race will die out. In a few short years there will be none left—not one Indian in the whole of America. I dare say the white man is better in some respects, but he is a bigger rascal, too. He steals and lies more than an Indian does. I hope some other race will come and drive him out, and kill him, like he has done to us. Then I will say the Great Spirit is just, and that it is all right.”

Lewis preceded her in death, dying of tuberculosis (what they called consumption).

Sarah went to live with a sister and may have resorted to alcohol. Later reports are of erratic behavior of an unhappy woman.  She died in 1891, likely of tuberculosis as well.

Her book and her lectures were a powerful legacy to both the white and the Native American cultures. Nevada selected Sarah Winnemucca as one of the two figures to represent Nevada in the National Statuary Hall Collection in the U.S. Capitol.  Funding for the statue was accomplished by a grassroots group that sprang from the Nevada Women’s History Project, and the final work was put in place in D.C. in 2005.