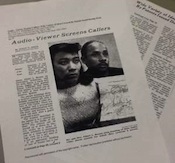 closed-circuit television system to be used for home monitoring.  That security system was the forerunner of all advanced home security technology in use today.

Marie Van Brittan (1922-1999) was born and raised in Jamaica, Queens. She became a nurse, who like most nurses, did not work regular 9-5 hours. Her husband, Albert Brown, was an electronics technician.  When she was home alone at odd hours of the day or night, she sometimes felt concerned. The crime rate in their neighborhood had increased, and everyone in the neighborhood knew that police response time in their area was notoriously slow.  Marie wanted a way to feel less vulnerable.

Working with her husband, Albert, the two began devising a home security system. One issue that bothered Marie was having to answer the door to identify a visitor. Soon they had a plan for a motorized camera that was attached to a cabinet added to the door.  The camera could move up and down to take views through four separate peep holes. The top spot would reveal the identity of a tall person; the lowest one would show if a child was at the door. The other peep holes could capture any person between these two heights.

A television monitor was placed in the Browns’ bedroom, and Albert 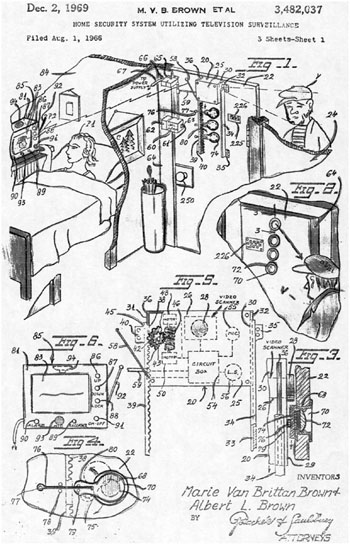 used a radio-controlled wireless system to feed the images seen at the door back to the monitor. A two-way microphone also permitted conversation with the person at the door.

As anyone who has visited an apartment in recent times knows, units exactly like the one the Browns invented are used in multi-dwelling buildings throughout the country.  Today the technology for such a system has shrunk drastically, but the invention is just the same.

The patent application was filed on August 1,1966 under the names of Marie Van Brittan Brown and Albert L. Brown, both of 151-58 135th Avenue, Jamaica, New York.  The  application states that the invention being described is “a video and audio security system for a house under control of the occupant thereof.  Occupant can see who is at the door…” An audio system permits the occupant to converse with the person at the door.

In the mid-1960s no one was creating home surveillance systems.  Therefore, Marie and Albert were applying for a patent on what would truly be a “first.”  In citing the patents that their application relied upon in order to create the system, the Browns noted only three previous patents: the invention of the television system by Edward D. Phinney (approved February 7, 1939), an identification system created by Thomas J. Reardon (approved November 24, 1959), and a remotely-operated control of the scanning system (approved June 28, 1966).

Today the Browns’ patent is referenced by 13 subsequent inventors who trace their own creation back to having made use of some aspect of the Browns’ closed-circuit system. The most recent patent that referenced the Browns’ invention was in 2013.

In a column in The New York Times (December 6, 1969) that was devoted to writing about approved patents, the reporter led with the Browns’ December 2, 1969 approval for Patent #3,482,037: “The patent drawings show a receiver resembling a small bedside television set, with a screen displaying a video picture of the visitor….A microphone and speaker permit voice communication with the person at the door, and then one button can sound an alarm; another can open the door if the resident determines that’s a safe course of action.” 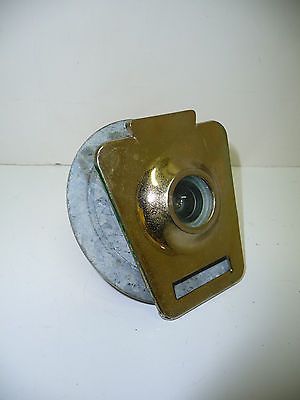 In an interview with the Times, Mrs. Brown pointed out that with the patented system, “a woman alone could set off an alarm immediately by pressing a button, or if the system were installed in a doctor’s office, it might prevent holdups by drug addicts.”

The article noted that the Browns did not yet have a manufacturer for the system but they intended to install one in their own home, and then would try to interest home builders.

Unfortunately, the media stories on the Browns end after the patent approval was announced in 1969. Marie Van Brittan Brown did receive an award from the National Scientists Committee for her work but no year for the award can be identified.

Next/Market Insights reports that the do-it-yourself home security sector will be a 1.5 billion business by 2020. Whether or not the Browns made a profit from their invention was not reported in the press, but the answer is no. As a black woman on her own, it would have been very difficult to sell an idea into what was totally a male business world.  (See Marion Donovan‘s story as well. )  what we do know is that Marie Van Brittan Brown’s idea laid the groundwork for a very important form of home security.