Today the Rockefeller Center Christmas tree is a worldwide symbol of opulence and the grand life of those who live in New York City, but this wasn’t how the tree began its story.

The first tree ever decorated at Rockefeller Center was improvised, put up by construction workers in December of 1931. They were grateful they had work when the country’s economic prospects were so bleak. The tree was decorated with paper garlands and some strings of cranberries, according to author Daniel Okrent who has written about the building of Rockefeller Center.  It also twinkled with reflections from a few tin cans hung by the men.

The Associated Press captured the moment. On the left side of the photograph, we can see a fellow standing at a wooden crate; he is the paymaster handing out paychecks.  The time is Christmas Eve.

Despite the Depression, the men were hired to build what was to become Rockefeller Center, a project that almost didn’t happen.  In 1928, John D. Rockefeller, Jr. leased the land from Columbia University because the Metropolitan Opera expressed interest in a midtown location.

With the stock market crash in 1929, the Metropolitan Opera backed out of its commitment. Rockefeller, too, had suffered major losses on Black Tuesday, however, after some thought, he became steadfast in his resolve to proceed with building the “city within a city” he planned.

In July 1931 a construction team broke ground on what would be the largest private construction project in New York City.  In doing so, Rockefeller not only provided jobs (some 75,000 over a nine-year period), but he also lifted morale of the entire city when people observed that a smart, wealthy businessman was expressing hope for the future.

There was no Christmas tree in 1932 but in 1933 an official tree was selected and decorated to celebrate the first holiday season after the completion of the early buildings that became Rockefeller Center.   The first official tree was forty feet tall, double the height of the original one put up by the workers, and it was lit with 700 electric lights.  NBC Radio broadcast the lighting ceremony. 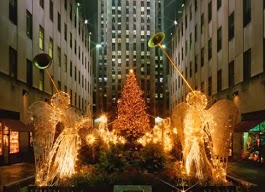 As the fame of the tree grew, so did its importance.  David P. Murbach (1952-2010) was head of the gardens division of Rockefeller Center, and for 26 years he was in charge of scouting for the tree. In The New York Times obituary about Murbach (1-5-2010), the tree selection was described as a year-round interest of his.  He sometimes traveled by helicopter to survey the trees in Connecticut, New Jersey, Vermont, Ohio, New York, and even Canada.

In Pursuit of Character

“You want personality: there’s density, a height and a width that we need,” says Murbach as quoted in the article. “But some trees have a way of holding their branches. I don’t know what else to call it but character.”

Once selected, the annual rite begins: The tree remains in place until late November when a crew returns for it.  The tree is supported by a crane while cut, and then usually transferred to a specially-built trailer on which it can make the journey into New York City, though once it made the journey by barge.  The size of tree is somewhat limited in height by what can fit on the trailer (125 feet) but more so by the width of the New York City streets the tree must travel.

In 1942 Rockefeller Center put up three trees but didn’t light them.  They were decorated in red, white, and blue “nonessential materials,” those not needed for the war effort.  The following year the tree also remained dark.

During the oil embargo in 1973 Rockefeller Center announced that they were using fewer lights, and kept them on for fewer hours than in other years. As of 2007 LED lights have been used, and they are powered by solar panels on nearby buildings.

This year’s tree, like many others have been, is a Norway spruce.  Since 2006, the trees are later donated to Habitat for Humanity. This year when the crowds disperse and the lights and ornaments come off, the tree will be milled and turned into lumber for home-building.