Elizabeth Masser and Peter Thorn emigrated to the United States from Germany and were married in Gettysburg in September of 1855, the same year that the cornerstone for the local cemetery was laid.  A few months later, Peter was hired to be caretaker of what was to be called Evergreen Cemetery in Gettysburg.

An archway with interior living space for the caretaker was built as a gateway into the cemetery grounds.  Elizabeth’s parents lived on one side of the archway building; Peter and Elizabeth lived on the other. (Today there is a caretaker house built behind the arch on the right side.)

Six years later when the Civil War began (1861), the Thorns had three sons.  By 1862, Peter felt it was his duty to join the Union Army, and he enlisted with the 138th Pennsylvania Infantry, leaving the cemetery caretaking duties to Elizabeth and her father.  At the time, the cemetery was averaging about five burials per month.

On June 26, 1863, Confederate soldiers began moving into Gettysburg. General Lee knew the northern movement would unsettle Union troops, and he was also aware his men would benefit from moving into farmlands that had not yet been picked over as they had been in Virginia.

As the Confederates arrived, the Gettysburg community had little choice but to answer their demands and feed them. 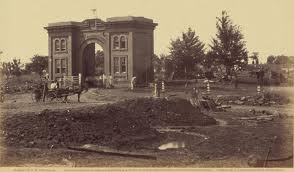 The Union Army of the Potomac was not far behind the Confederate movement.  General Howard and his men came in on the road that took them past the cemetery, so they stopped at the Evergreen gatehouse looking for a man who could familiarize them with Gettysburg.  Six months pregnant, Elizabeth Thorn stepped outside as the most capable volunteer in the household.  She accompanied one of General Howard’s men into the field, pointing out the main roadways and the lesser known local paths that the soldiers could use.

That night a Union soldier returned to the gatehouse, ordering Elizabeth to prepare dinner for the Union Generals–Howard, Sickles, and Slocum–all of whom had come to Gettysburg.  The Thorns had very little food left, having been ordered by the Confederates to give them what they could, but Elizabeth did the best she could to pull together a meal.

In return, General Howard ordered some of his men to move the family’s belongings to the cellar for safekeeping.  Elizabeth asked whether the family should leave the area, and Howard allowed that they could stay but should go to the cellar when fighting began.  He added: “When I give you orders to leave the house, don’t study about it, but go right away.”  It was understood that if the family needed to move on, they were to take nothing with them. 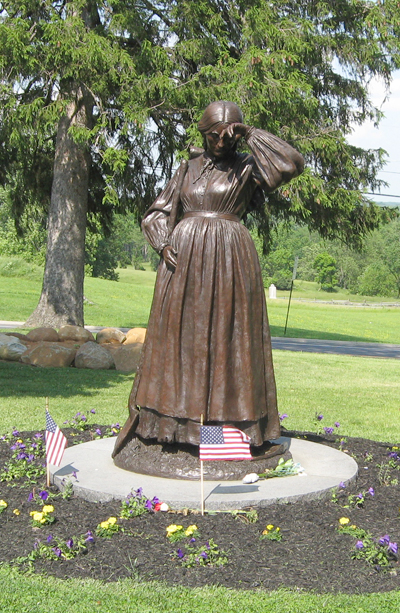 The next day the fighting began near Cemetery Hill, and the Thorns, along with some neighbors, took refuge in the cellar. At the conclusion of that day’s fighting, a solider arrived and told them to leave; that they should follow the main road so the soldiers would know it was them and not open fire.

The family made it to a farmhouse before nightfall, and they stopped in, hoping for food.  The house was filled with an assortment of soldiers and community people in addition to the family, and there was no more food; Elizabeth was told they could spend the night. One of the soldiers called Elizabeth over to him to show her a photograph of his children—three little boys.  He asked if Elizabeth’s three sons, 7, 5, and 2, could sleep near him for the night.  They did.

Elizabeth was among the Gettysburg citizens who set down eyewitness accounts after the siege, so we have in her words what happened to her during the next few days.  She wrote that the next day she and her father traveled back to the gatehouse to see if they could retrieve any possessions. On their arrival they found that their hogs had been killed, the windows of the house were shot out, and the trunks that had been taken to the cellar for safety had been emptied.

The house was filled with wounded men calling for water.  Outside, townspeople were beginning to deposit the dead who had been killed around town.

Elizabeth and her father realized there was nothing left to take and it was too early to return, so they walked back to gather the boys and her mother and they continued on to a larger farmhouse in order to find something to eat.  There were meager supplies at the new location, but there was enough that Elizabeth was able to pitch in to help make bread to feed the many hungry people who came through the area.

When the Fighting at Gettysburg Ended 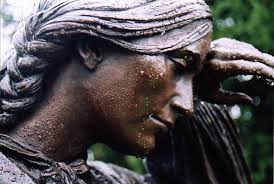 Starting late on July 4, General Lee began to move some of his men back to Virginia, and the family made their way back to the gatehouse.  As they arrived, they saw vast numbers of bodies had been delivered to the cemetery for burial. There were also were fifteen dead horses near the house, and nineteen others horses had died on the property nearby.  The stench of animal and human decay was overpowering.

The house itself was in shambles.  Three local women came over to help Elizabeth wash what was salvageable, and cemetery president David McConaughy came by to see Elizabeth and directed  that burials needed to move forward quickly.   He went into town to enlist volunteers, but those who came soon became overwhelmed and left—some of them too ill to continue, some of them simply repulsed by the work.  Though Elizabeth received no extra pay for her work, nor were the Thorns ever compensated for the damages incurred, Elizabeth stretched to pay some workers, but even they did not last long.

For the most part, the work was done by Elizabeth and her father, working in the heat of mid-July for as long as daylight lasted.  Ultimately, they buried 105 war casualties (91 soldiers and 14 civilians).

Despite the hard work of digging graves, Elizabeth managed to carry the baby to term, giving birth to the Thorns’ first daughter, Rose Meade (named for General Meade who commanded the Union Army of the Potomac), on November  1.

Peter Thorn returned home after Appomattox in 1865, and the family remained at Evergreen as caretakers until 1874.

In 2002 a Civil War Women’s Memorial was dedicated. The memorial is within Evergreen, near the gatehouse. The sculpture depicts Elizabeth attending to burial duties.  Her face is full of anguish, an apron covers her pregnant abdomen, and she holds a spade representing all she did.

Some refer to her as the “Angel of Gettysburg.”

If you visit Gettysburg, stop in Evergreen Cemetery and see the sculpture, and walk across the street where you can walk from monument to monument where each battlefield unit has set in marble the story of what they experienced on Cemetery Hill.  A trip into town, and a town tour, reveals that bullet holes can still be seen in local buildings, and provides a sense of the terror the townspeople had to have felt.

15 thoughts on “Elizabeth Thorn (1832-1907): Six Months Pregnant and Burying the Dead at Gettysburg”