Dogs were very much a part of the California gold rush.   While it is 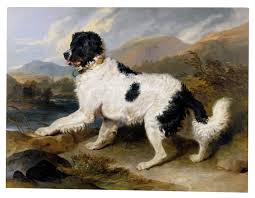 easy to see how dogs would be brought along by hopeful miners traveling west on horseback or by prairie schooner, dogs were also brought on board the ships that were sailing from the eastern seaboard to San Francisco via Cape Horn. This route took five to eight months, a very long time for both people and dogs to be at sea.

Here are two first-person accounts of separate shipboard trips, both of which happened to include Newfoundland dogs:

Rover to the Gold Rush

Fanny Foley, the daughter of the medical officer on board the ship, The Wildfire, wrote a book about her experiences.  In Romance of the Ocean: A Narrative of the Voyage of the Wildfire to California (1850), Foley wrote of her observations of Captain Black’s dog, Rover:

“Captain Black had a beautiful Newfoundland dog, of a large size, spotted white and brown, and named Rover.  It is always at his side, except when he sends it into the water, which he does daily in calm weather. [Rover] generally swims about for half an hour, diving and playing with sticks and pieces of cork that are thrown over to him.

“When the captain senses Rover has had enough, he has a boat lowered so Rover can climb into it and be pulled back up to the ship.

He appears to love the animal devotedly, often stopping as he paces the deck, to pat the dog’s head and say, ‘Fine fellow, fine fellow!” At dinner, too, Rover lies at his master’s feet, and is always remembered as soon as the guests are helped.” 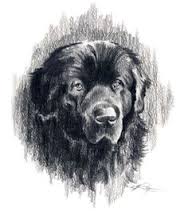 Another Newfoundland traveled to California by sea with the Bates family. Mrs. D.B. Bates and her husband purchased a Newfoundland before they left Baltimore, and they reportedly were very glad they had done so as the dog’s cleverness never ceased to amuse them.

The couple would promenade along the deck daily with the dog: “Whenever a sail was discovered in the distance, he would place his huge fore-paws on the ship’s rail, and send his loud hoarse bark reverberating far over the swelling wave.”

Dogs were Calming and Distracting

Dogs were also found to provide a calming influence on passengers.  Those who were making the journey tended to be a competitive lot, all of them hoping to beat out the others for the better claim once on land.  The presence of a dog reportedly helped neutralize some tense situations.

Animals also helped distract passengers from the monotony of the long trip.

William Hoffman wrote about the birth of two kittens and eight pups on board a ship in 1861 and the great pleasure the occurrences offered to passengers:

“I had not before learned to attach so much importance to these subjects, nor show the feline and canine race such marked attention as then; and I suppose because I had never been favored with pleasing proximity for so long a period; and as the saying is, ‘in order to love well, one must know well;’ so by contact with this distinguished troupe, I became somewhat attached to them from their comeliness, and the daily interest thus afforded us on our voyage.”

In a future post, a dog’s life at a gold mine will be explored.  In the meantime, you might enjoy reading about Dorsey, the mail dog, who delivered letters to one goldmine.