Throughout history, working dogs have been important to 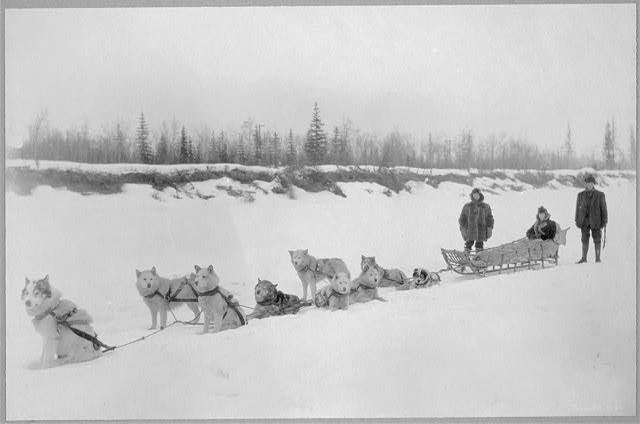 civilization. The use of sled dogs to keep communications open during winters on Mount Rainier is just one of many stories that could be told of well-trained working dogs.

Located in Washington state southeast of Seattle, Mount Rainier is the highest peak (14,4141 feet) in the lower 48 states. It is actually an active volcano and is considered one of the most dangerous in the world because of the amount of glaciers and snowfields that would melt quickly if it were to erupt.

As the railroads came west, investors began to wonder about the mineral reserves around Rainier, but they also saw potential in Mount Rainier as a tourist destination, which would encourage more passenger travel on the railroads.  A few local politicians began floating proposals to make Mount Rainier a national park, and in 1899 it achieved this status as the fifth national park in the United States.  The park encompasses Mount Rainier peak as well as beautiful valleys, countless waterfalls, subalpine meadows, and plenty of forest land.

Near the southwest corner of the park is Longmire, the original park headquarters. This was very near where most people entered the park to begin their hiking and explorations. Most who arrived made their way toward Paradise Valley, a beautiful area that took them closer to Rainier.

As early as 1909 skiers began to arrive at Longmire; they wanted ski or snowshoe in to Paradise Valley in order to get closer to the peak. By 1916 there were enough visitors to merit construction of an inn at the far end of Paradise Valley.  Initially, Paradise Inn was closed in the winter, but within a few years, a hearty group of area residents known as the Mountaineers came regularly in the winter. The trip to Paradise Inn was beautiful and the trek was challenging.

By the mid-1920s, telephone lines provided communication year-round from Longmire to the Paradise Inn.  The distance to the inn was

only 12 miles, but to climb the elevations the road had to be constructed with many hairpin turns across areas traveled; the telephone lines were generally constructed along the roadway.

In the winter, however, snow amounts could easily total 20-30 feet, and at that time, no motor-powered vehicle had been created that could climb into Paradise. Those who visited in the winter and ventured past Longmire did so on skis or by snowshoe.

“Whose Snows Halt All But Dogs”

The winter scene was well set by Edward J. Crosby in an article, “Whose Snows Halt All But Dogs,” in the American Kennel Club Gazette (November 27, 1927):

“Soon all that will connect Paradise with the rest of the world will be the thin threads of the government telephone line. But when the lashing winds come roaring down from off the jagged ridges of the Tatoosh Mountains, the telephone wires will snap, and poles will be broken in two, like matches.”

These storms often happened very early in the season. Once the wires were brought down, communication between Longmire and Paradise was lost until the spring thaw.

Working Dogs to the Rescue

In 1924 one of the park administrators had an idea: import dogs from Alaska.

The park service located one of the great racing and mail teams that often traveled to Nome.  The team consisted of a mix of malamutes and huskies—twelve of them–led by lead dog, Jerry. Coming along to command the team was their driver, a full-blooded Eskimo by the name of Kakisenoruk. Kakisenoruk had attended an American school through eighth grade, but he came from a family of reindeer herdsmen and dog mushers and liked nothing better than working with his dogs.

Dogs Settle in to Work

After details were worked out with the park service, the team made their winter home at Longmire.  If the phone line went dead, Kakisenoruk harnessed his dogs and loaded the long hickory sled with 400 pounds of provisions. The job of Kakisenoruk and the team was to get Frank McCullough, a government lineman, up into the corridor leading to Paradise Valley.  He was the one who could identify the location of the break and repair it.

As the two men and 13 dogs went out, they were always prepared to be gone for one day or several. Their trip length depended on the difficulty of travel and the challenge of locating, repairing, and testing the line. The weather was often fierce with gale-force winds; they knew that was a “given.”

Both at Longmire and on a trail, it was up to the lead dog to keep order among the twelve other dogs: Speedy and Sport, Mutt and Jimmie, Jack and Tommy, Thor and Tip, Smoky and Happy, Blanco and Dick.

“[Jerry] is the leader and sets the pace and keeps his team mates in line—if a dog gets fractious he will double back and show him his place in furious fashion,” wrote Crosby in the Gazette.

When at Longmire their kennels were in a barn and their feeding rations consisted of cooked rice, corn-meal and scrap meat.  The dogs were fed once a day, at night after the day’s work.

Today our communications options are varied. While cell phones might fail to work in a region like Rainier, we still have satellite telephones or two-way radios for communicating with people in hard-to-access parts of the country.

But the mid-1920s, working dogs were absolutely necessary to keep the lines of emergency communication open between these two remote points, and they did their job well.

Many thanks to the American Kennel Club for maintaining a wonderful library where these stories can be found by writers and researchers.