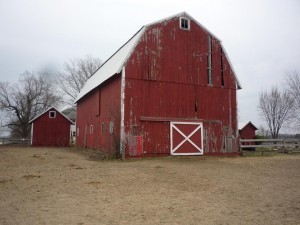 The American barn is a quickly-disappearing icon of our country.  When rural life in America dominated, barns varied in style and purpose but there was one element they all shared. Each was built with common sense, a specific intent, and economy. Early barns were more important than houses because without an agricultural building to protect the animals or the crops, early settlers had few ways to survive.

Sadly, many of these barns are falling into disrepair or being knocked down as more and more land is developed. With the demise of the American barn, we lose a part of our story.

“The types of barns that were built varied based on the settler’s country of origin,” says Howard P. Mock, a Chicago-based architect, preservationist, and an environmental and climate change advocate. “People brought their ideas from their home country and that was what they built in America.”

This practice was rooted in the fact that there were no blueprints or guide books for building barns. Knowledge of barn-building passed from generation to generation, so people built what they knew from their background.

Just as barns varied by where their builders came from, they also varied according to their purpose.  Says Mock: “What we think of as a classic barn with the gambrel roof is a dairy barn but there were smaller barnlike structures for sheep and goats as well as for chickens. In addition, some barns were built just for crop storage—ranging from grains to tobacco.” 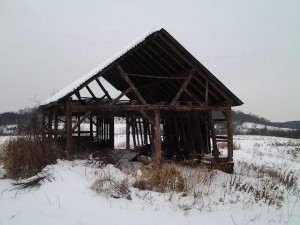 Mock’s love and respect for barns grew from his childhood when the family visited Pennsylvania relatives who lived on a farm. In his professional career, he has planned, designed, restored, renovated and built barns and many barn-like structures over the past 25 years. As a hobby, he photographs these rapidly disappearing icons of America’s rural past. 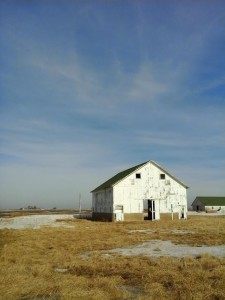 Geographic location of the farm resulted in certain necessary adaptations. Mock points out that the height of the barn roof—and therefore the storage capacity of the hayloft—had to do with the expectations for winter weather. In places like Wisconsin or New England the roofs extended higher in order to store more hay.

In the South where cattle were more likely to be kept outside and storage of their food was less necessary, the barns themselves stored produce or tobacco and the roofs were much lower.

“Bank” barns were built in hilly parts of Pennsylvania by German and English settlers. The barn was built against a hill with entrances from two levels—a higher point on the embankment as well as access below. Wagons could drive right into the hayloft from a road to the upper part of the barn. The animals entered the barn from the other, lower side of the barn where a doorway brought them directly  into the main floor.  It created a very efficient loading and unloading system.

Hay was then tossed down by a farmhand who delivered the appropriate amount of hay for the animals each day. 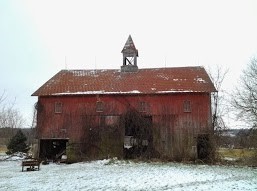 The site selected for a barn was always close to water. “Spring houses” made of stone were built around the water source. This kept the water clean, but by building around the water source, farmers gained an enclosed dark place that remained cool, providing a storage place for milk.  Before farmhouses gained running water, some farmers experimented with providing water to the barn via metal or wood pipes. This saved time and reduced the farmer’s workload.

While the depiction of barn raising in movies always seems to feature cheerful people singing and dancing, this fictionalized version of barn-raising is not too far from the truth.  Barns were big projects that required help from volunteers. The emphasis was on working quickly as a group so that everyone could return to their own responsibilities.

Singing and dancing may or may not have happened, but the neighbors were almost certainly delighted to see each other and share news. Women came along to cook and the children played and helped where they could. The odds were that the neighbors would help for a couple of days and then leave much of the finishing work for the farmer and any workers he employed. The frame of the barn had to be built on the ground as that permitted accurate measurements and soundness before the first wall was put up. In his book, An Age of Barns, Eric Sloane writes that farmers with larger properties might hire a framer to come in to lay out the frame as this was difficult work.  Neighbors would still be needed to help lift up the four framed sides of the barn.

Howard Mock explains that they didn’t have milled lumber to work with so they used whatever types of wood were available in the area.  Ideally the height of the plank from the tree was tall enough to reach where the builders wanted the roof line so planks could be placed vertically. After the walls went up, the roof was added.

In early New England, barns were frequently attached to the farm house. (Settlers who came very early to establish farms would likely have started out living in a portion of the barn to benefit from the warmth generated by the animals.) Later, house and barn were often connected via a covered passageway. Then the family could feed the animals, milk the cows, and take care of other chores without having to fight their way through a snowstorm. 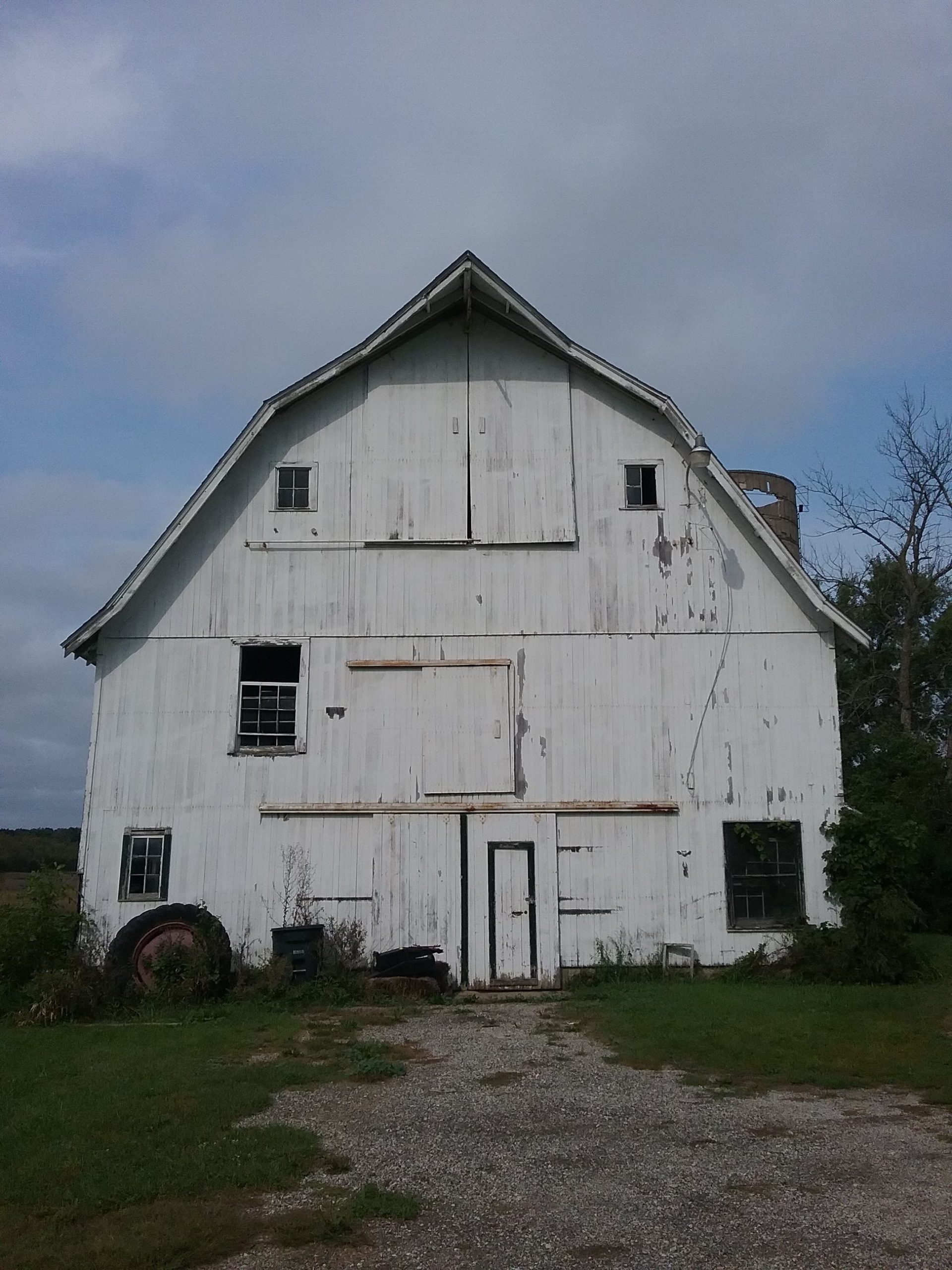 Barns were sized for what they were to contain.  Those that housed cows and stored hay in a hayloft were larger than those that were for sheep or goats or those built for storing specific crops.

Tobacco barns in the South varied from other barn designs because the tobacco needed to be hung across racks in well-ventilated space to dry out the crop.  Later these barns were set up for fire-and-heat drying, which meant the design needed to be changed to a functional enclosure that permitted the heat.

Ventilation was important for most barns. If the sun beat down on a barn roof where grain was packed in too tightly, the grain could explode. Vents under the eaves were common. Some barns had slits running vertically along the walls for air; others had cupolas.  Stone barns featured star-shaped designs that were for ventilation.

These openings served another purpose: owls could come in during the day and roost in the rafters.  Farmers welcomed the owls as they helped keep the mouse population down.

Barns frequently got hit by lightning so the lightning rod was a key element.  Mock points out that after coping with lots of lightning hits, farmers began adding a glass globe to the top of the lightning rod.  If the rod was hit, the globe slid down the lightning rod and broke.  This warned the family to survey for damage after a storm.  Today those globes are in high demand by collectors.

Doors were another well-planned part of a barn.  Some barns featured smaller side doors, but the doors that permitted animals and wagons or trucks to enter had to be larger.  Sliding doors became popular because then the farmer need not swing open a wide door and let in a rush of cold air.

The ”X” design of boards—often white–across barn doors is there for the very practical purpose of making the barn door stronger.

The color of barns varied by region but it all stems from practicality and cost. In the eastern part of the country, iron oxide, a reddish color (“barn red”), was available and acted a wood preservative and an insecticide. 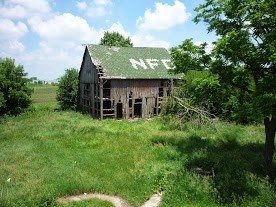 As farmers moved west, whitewash from milk paint was more easily available. Barn “brown” was used in western states.  Settlers found that the preservative being used on railroad ties worked well for the wood used for barns.

Later, barns began to feature advertising.  As country roads began to penetrate farm country, farmers found they could make some extra income by letting companies paint advertisements on the roofs and walls of the barn.  For a company, this type of advertising was easier than gaining permission for billboards.

Most barns being built today are gigantic and unrecognizable from any other factory-type building.  Dairy barns are totally automated and might house at least 2000 cows with a schedule for continuous milking.  This is a far remove from farm life of the past. But progress was coming. (Click here to read about Elsie the Cow and the exhibit at the 1964 World’s Fair. Visitors to the Borden display at the fair were able to observe an early form of mechanized milking.)

The thought of a 2000-cow barn sounded so inhumane I looked around to see if there were efforts to create better environments. Indeed, Cornell has a program that is featured in Modern Farmer.  They are experimenting with a dairy barn that doesn’t sound like a “farm of old,” but it does sound more desirable for a cow than the mechanized 2000-cow operations. Click to read about “The Dairy Barn Redesigned.”

While saving buildings simply for the sake of saving them is pointless, we all benefit from times when a barn can be modified for adaptive re-use as a museum, a home, a restaurant or an office complex.

Today an organization, the National Barn Alliance, operates nationwide to coordinate preservation efforts to save America’s historic barns.  For more information about how to join their effort or to preserve a specific barn in your area, visit their website.

4 thoughts on “The American Barn: A Disappearing American Icon”