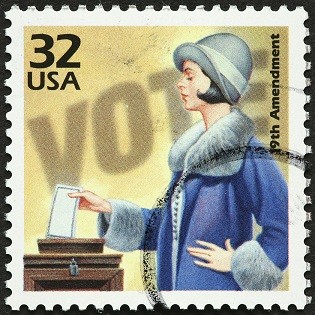 If women’s news receives the coverage it deserves during the next week or so, then there will be stories about women and the vote. Headlines may read something like: “Ninety Years Since Women Were Given the Vote!”

The problem is “were given” is dead-on inaccurate; even the wording, “got the vote” does not begin to explain the battle that women suffragists waged in order for women to vote.

And why is this coming up in August? August 18, 1920 was the date on which the last vote needed to ratify the amendment was received; August 26th is celebrated as Women’s Suffrage Day, as that is the official day when the amendment became part of the Constitution.

But so much more happened before that.

Everyone has read about the women’s rights convention in Seneca Falls, New York (1848), but few people think of the hard work and steady effort that only began in 1848. Women staged many stands against ‘taxation without representation.” The campaigns took many forms.

One protest for suffrage took place in 1868 in Vineland, New Jersey. As was the custom of the day, male election judges sat at a table with a ballot box, supervising as voters came to drop in their ballots. Women set up a table opposite the men and placed on it a box to serve as a ballot box. As women arrived at the polls, they attempted to cast a vote in the regular ballot box. When they were turned away by the male judges, they approached the other table and dropped their ballots in the women’s ballot box. They then went to the homes of friends and neighbors to care for those women’s children so that the others, too, could protest.

Four years later, in 1872, well-known suffragist Susan B. Anthony urged all women across the country to attempt to vote. That year, she, her three sisters, and a dozen other women all went to the polls in Rochester, New York and cast ballots.

Rochester officials decided the best response was to arrest Susan Anthony for the transgression and use her as an example. Thirteen days after voting, Anthony was arrested. The case eventually went to court, drawing national attention. Susan B. Anthony wanted to testify on her own behalf, but she was declared by the court to be “incompetent to testify” because she was a woman. The government went on to present its case, after which the judge instructed members of the jury to find her guilty. He then pulled out of his pocket a previously written verdict which declared Susan B. Anthony guilty of voting and fined her $100 for her crime.

Suffrage as Part of a Political Platform
For many years the campaign for women’s suffrage continued. By 1916, the atmosphere was finally shifting, and women were urging for suffrage to be included in the platform of a major political party. When the Democratic Convention opened in St. Louis on June 14, seven thousand women from across the United States lined the streets along the route that the delegates would take on their way to the Coliseum where the sessions were to be held. (Seven thousand women may seem like a small number by today’s standards, but consider the difficulty of traveling in 1916 and the very narrow definition of a woman’s role in society at that time. Then one can’t help but be impressed by how many women left their homes that June to fight for this cause.)

Later when word leaked out that suffrage had been added to the platform, one yellow parasol began to wave followed by another and another. A contemporary writer compared it to a “sea of golden poppies…” waving in the wind.

Still Not Done
President Woodrow Wilson, the Democratic candidate, won his second term that year, and when no action on suffrage took place during the first year of term, suffragists picketed the White House during the winter of 1917.

On April 6, 1917 the United States entered World War I, and the atmosphere of the country changed. Suffragists outside the White House began taunting Wilson about sending men to die for democracy when women didn’t have the right to vote at home.

The White House administration was perplexed, not wanting Wilson to face a fuss at home in the midst of a global war; and they let the police know they were ready for the picketers to go away. When spectators assaulted the picketing suffragists, the police did nothing to stop them, and finally, police finally determined they could arrest the suffragists on charges of obstructing traffic.

This did little to stop the White House protesters, so the police arrested one of the leaders, Alice Paul. She and several other women were sentenced to jail, with Paul receiving a particular harsh sentence of seven months. Paul then led the others in a hunger strike, saying it was the only protest left to them. After a couple of weeks of this, the prison doctors ordered force-feeding of the women.

Newspapers carried sympathetic stories about the women’s jail terms and the forced feedings, and support for the cause actually grew.

Finally on January 9, 1918 President Wilson announced he favored suffrage for women. The next day the House passed the Susan B. Anthony Amendment, providing suffrage for all women citizens; this was passed by the Senate on June 4, 1919. On August 18, Tennessee became the 36th state to ratify the amendment. On August 26, 1920 it officially became the 19th Amendment to the Constitution.

So were women “given” the vote? I don’t think so.

Voting is a privilege as well as a responsibility. Be sure to use it.

For information about the first women who served as delegates to a political convention, see “A First for Women (1908).”

4 thoughts on “Little-Remembered Stories of Women and the Vote”