Wheelchairs today offer a very high level of independence and 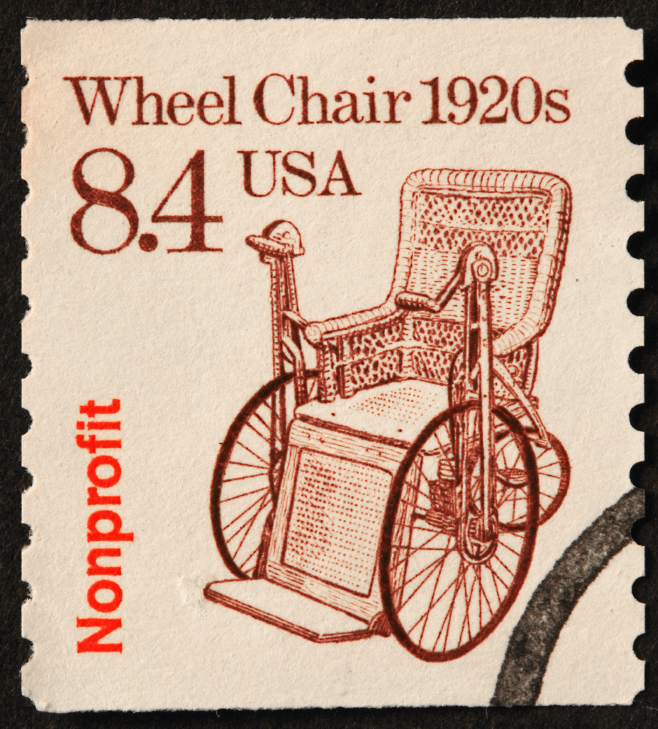 mobility to people who cannot walk because of injury or disability. When and how did they come about?

While not in common use until the last century, the earliest known wheeled conveyance dates to the Greeks who put wheels on a bed in order to move an invalid from location to location.

Innovation arrived in 1665. A German watchmaker who was a paraplegic came up with a workable way to get himself around. He added hand pedals to a wheeled seat, which gave him a certain degree of mobility. There still would have been many limits for him in an era when there were no elevators or paved roads.

For many, many years, only the wealthy who were sick or injured could consider any type of option for mobility.  The poor who were disabled needed family to care for them. Those without family were left to beg on the streets; others worked in freak shows (circus side shows) where people with all types of disabilities sometimes found work.

Starting in the mid-1800s, the U.S. Patent Office began to receive patent applications for various forms of chairs for those who lacked mobility. Most of these chairs were described as “nursery” chairs or 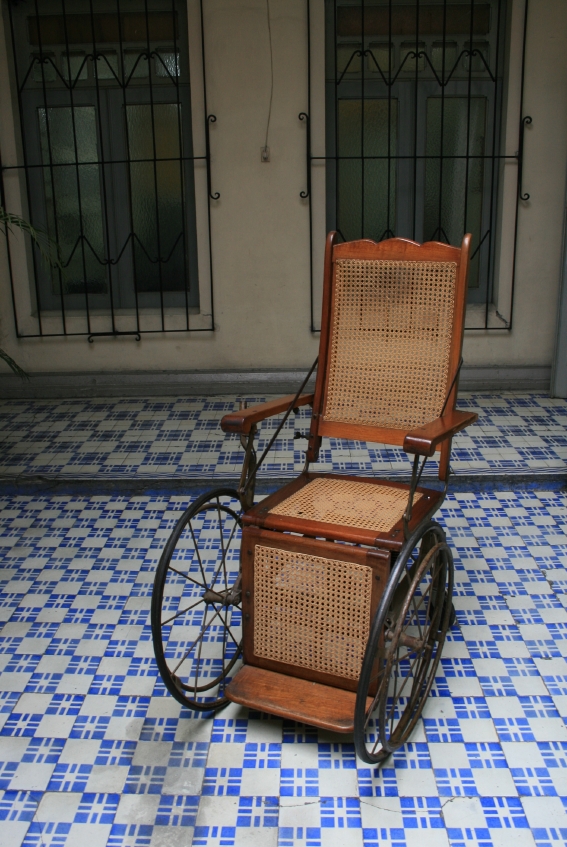 “invalid” chairs. They were sometimes referred to as “convertible” chairs, as the wheels were generally just one option. For example, in 1878, U.S. Patent # 206450 was for a chair with a base that could be switched from rockers to wheels.  By 1881, one patent included “push rims” (handles on the wheels) to permit a person to move themselves forward. The chairs then, however, would have been heavy enough that the push rims would have helped, but they would not have made a person fully independent.

Rolling Chairs Begin To Be Used

The first use of what were called “rolling chairs” in any number was in Bath, England in the mid-1800s. Patients were often told by physicians to visits Bath for its healing, natural warm springs. The chairs were used to get people from their hotels or residences to the spas.

The Bath chair was not a perfect item; it had two large wheels in the back and one smaller wheel in front. Because they were heavy and awkward, the chairs required someone strong to push them. They also were said to be not that comfortable for the patient. But they were a start. 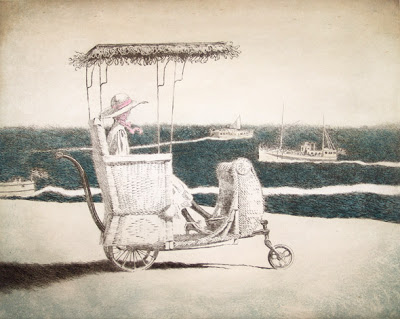 In the U.S. these “rolling chairs” began to be used in Atlantic City in 1876, where the seaside air was considered medicinal.

As early as 1903, a wealthy woman appeared in Atlantic City with her own personal rolling chair and was widely admired. She and the chair were so distinctive, she merited mention in The New York Times (3-22-1903):

The sensation of the week came in the person of a beautiful and mysterious woman, who made her appearance on the Boardwalk the other day in a superb private roller chair, propelled by a gigantic Negro in sable livery. She is here alone, except for the attendance of a large retinue of servants who share with her a beautiful villa in the Chelsea district. There are many rumors as to her identity, but the landlord refuses to satisfy curiosity beyond admitting that she comes from New York. The chair is made of white wood, trimmed with turquoise blue. The occupant has appeared twice in a costume to match the trimming of the chair, and with a flimsy blue veil.

In addition to these private wheelchairs, there were many public 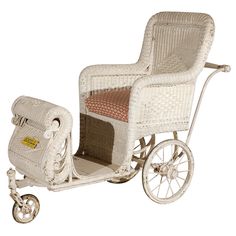 rolling chairs available for rent.  Because the Atlantic City chairs were so appealing, healthy visitors began feigning an inability to walk so that they, too, could be pushed along the Boardwalk to look at the local attractions. At this point, the chair rental company made the smart business decision to offer them to tourists as well as the ill.

Rolling chairs were in common use in Atlantic City for many years but eventually their use faded away. Then in 1984, a hotel clerk came upon 83 ramshackle old chairs in storage and decided to refurbish them and bring them back into use.

While there is a long dotted line between the popularity of the Atlantic City Rolling Chairs and a greater acceptance of wheelchair users in towns around the United States, one has to assume that Atlantic City offered a very early step in creating a world that is more wheelchair acceptable. (More about this later.)

The Need for Wheelchairs Grew in Spurts 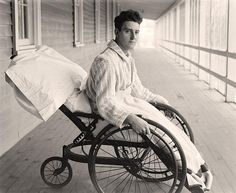 While the world has always had people with disabilities, the Civil War created an expanding need for ways to help the wounded. It was the first battle where injured men in any number were survived. This meant that ways had to be created to help them live in the world.

In 1916, there was another increase in the need for wheelchairs at the outset of World War I. Initially, the United States hoped to not enter the war, only providing support to the Allies.  The New York Times (9-17-1916) wrote about how wheelchairs and other supplies were being shipped to Italy by the War Relief Board. The article noted that the American Relief Clearing House for the Society of Mutilated Soldiers handled the distribution of “rolling chairs” to maimed European soldiers.  (9-17-1916)

And of course, by 1917, the United States was no longer just an observer of the war. With its entry into the War, American soldiers, too, soon needed wheelchairs.  World War II and the 20th century incidence of polio also drove up need for wheelchairs.

The first “wheel-chair” patent (as opposed to a patent for an invalid chair or rolling chairs) was in 1915, and it was distinctly different from the others as it had a small battery-powered motor.  The chair could be controlled by hand or by knee and was for people who hadn’t the strength to self-propel the earlier models.

Though advances were being made on these early wheelchairs, the

chairs themselves were still heavy and inflexible.  When a mining engineer named Herbert Everest was caught in a mine cave-in and broke his back, he never regained his ability to walk. Before his accident, Everest had enjoyed getting around in an early automobile. He was determined to find a way to get himself and his wheelchair into a car to regain some of his freedom.

He often complained to his friend, Harry Jennings Sr., who was a mechanical engineer. The two of them thought and talked about ways to build a better wheelchair.

Jennings began working out how to execute their ideas. By early 1936, the two men were satisfied with the chair they created. They applied for a patent on what was a lightweight foldable wheelchair that offered a sturdy ride for its passenger but could be collapsed and put in the trunk of a car. The patent was approved in 1937, and they established a factory where the chairs could be manufactured. Herbert Everest had some of his freedom back.

The Everest and Jennings wheelchair became the dominant 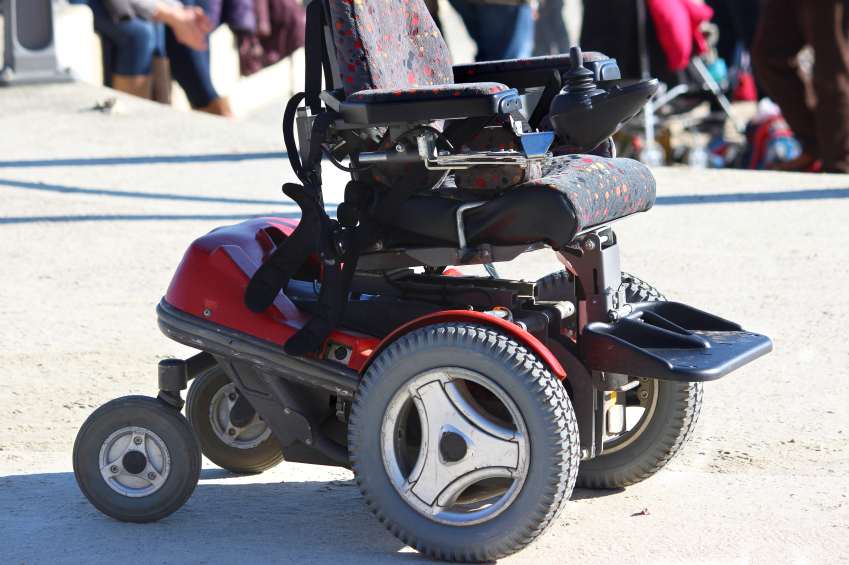 wheelchair in the United States. Because there was little competition in the marketplace, Everest & Jennings International was a bit slow on innovation, but they could turn out product. When a Canadian designed the first workable, modern electric wheelchair, he found little interest in the product from Canadian companies. He finally gave manufacturing rights to Everest & Jennings. At least he knew that they could produce the chairs. By the mid-1950s, they began manufacturing the power chairs in big numbers.

Today there are many forms of wheelchairs, and there have been significant advances.  These newer models range from very

lightweight chairs that maneuver easily and can be used for sports to bigger chairs that can be controlled with a joystick, a head stick, or sip and puff devices for those with upper body restrictions. Today there are even chairs that can climb a flight of stairs. Some have hydraulic lifts that permit the chair to elevate the person into a standing position if so warranted.

While the invention of the wheelchair was a significant step forward, we have not addressed accessibility.  That’s a separate story of bravery and determination on the part of many individuals. I’ll write about that in a few weeks.

To read about a fellow who spent 30 years of his career in a wheelchair with barely a mention of it, read about Lionel Barrymore.

History of the Wheelchair www.wheelchair-informoation.com/history-of-wheeelchairs.html

History of the Wheelchair  www.mobilityschooters.co.nz/history/wheelchairs

“Back on the Boardwalk; Rolling Chairs Re-Emerging As Cabs for the Casino Crowd,” The New York Times, 9-2-1994.

Patent for Chair for Invalids

9 thoughts on “The Wheelchair: Who Thought Of It?”